At the dawn of the study of large cichlids in Central America, many of them were attributed to the genus Tsichlazoma. But new data obtained by scientists led to a global revision of this genus, and a significant number of species were transferred to others. The colorful Salvini cichlazoma had the same fate; according to modern classification, it belongs to the genus Trichromis. The historical name, however, has taken root very firmly, it is under it that the fish is most often found on sale. What is so interesting about this cichlid and how to properly care for it, read our article.

Cichlazoma Salvini (Trichromis Salvini, formerly Cichlasoma Salvini) is a freshwater ray-finned fish from the Cichlid family. Sometimes it can be found under alternative names: tricolor cichlid or yellow-bellied cichlid.

The first scientific description of the species was made by a German-born British scientist, Albert Gunther. But the cichlid got into amateur aquariums only half a century later. The fish received its specific epithet in honor of the explorer O. Salvini.

Tsichlazoma Salvini is a very bright and beautiful fish that will decorate your aquarium. True, her character is not so simple: she is territorial and aggressive, especially during the breeding season.

It is a typical predator: in nature, it feeds on large crustaceans and small fish.

If you see Salvini cichlazoma at a young age, you will most likely be disappointed. The juveniles are colored gray-beige with dull dark stripes: one stretches from the eyes to the tail, and the other along the back. But as it grows, everything changes dramatically, and the fish acquires a simply fantastic outfit, the brightness of which increases during spawning.

Cichlazoma Salvini has a high, rounded body with a pointed anterior end. On the head of males, a fat roll can develop. Also on the head are large eyes and a large mouth with noticeable teeth, which immediately betrays a real predator in the fish. The maximum body size in nature is 22 cm, but in home aquariums, fish rarely grow more than 16 cm, while males are larger than females.

It is simply impossible to take your eyes off the adult Salvini cichlazoma. The main body color is dark green or yellow-brown, on the abdomen up to the very tail (especially in females) there is a large red spot, capturing the anal fin. A wide dark strip with uneven edges stretches from the eyes to the base of the tail; above it there are several shorter stripes, covering the forehead of the fish. On the operculum, blue-green spots and streaks can be found, the border of the same color runs along with the pelvic fins. The pectoral fins are practically colorless. The dorsal fin is well developed and ends with a long outgrowth, specially developed in males.

During the spawning period, the color of fish increases many times over and becomes more contrasting.

An interesting fact: with the group keeping of the Salvini cichlazoma in the flock, a strict hierarchy is established, while the dominant males are brightly colored, but the males located below the ladder have a nondescript color, like in juveniles. 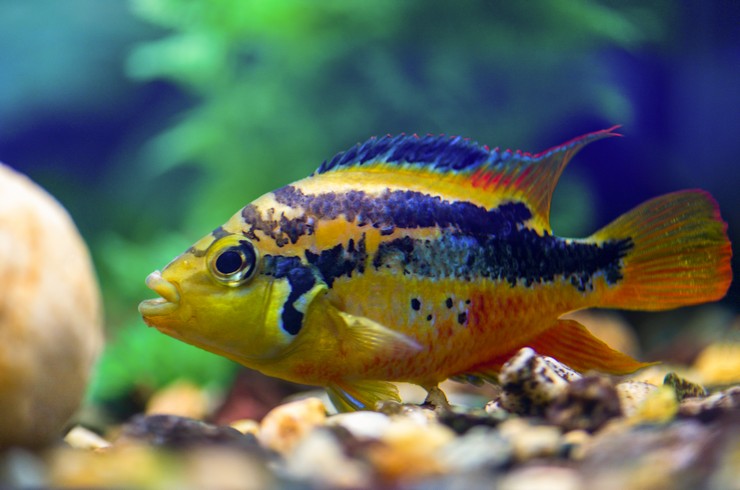 The origin of the Salvini cichlazoma comes from the Atlantic slope of the southern part of Mexico and adjacent countries – Guatemala and Belize. It is found mainly in small rivers with moderate and strong currents. Unlike many cichlids that gravitate towards snags near the coast, representatives of this species are not ambushed predators but prefer to spend time in open water, looking for their favorite food – insects, crustaceans, and small fish.

Ciichlazoma Salvini is a territorial fish, which must be taken into account when choosing an aquarium. The minimum volume for a pair of fish is 100 liters. If the fish are planned to be kept in a group, then the aquarium will need a very spacious one, because each pair will occupy a certain area and will zealously guard it. The aquarium must have a cover so that the cichlazomas do not accidentally jump out of it.

The best soil option is sandy or small pebble. A big plus when keeping the Salvini cichlazoma is that they almost do not dig soil, so it is possible to keep aquatic plants in the aquarium, for example, Echinodorus, Anubias, Cryptocorynes, giant Vallisneria, etc.

Stones and driftwood are used for decoration but do not forget that Salvini’s cichlazoma is a resident of open water, it needs a large swimming space. 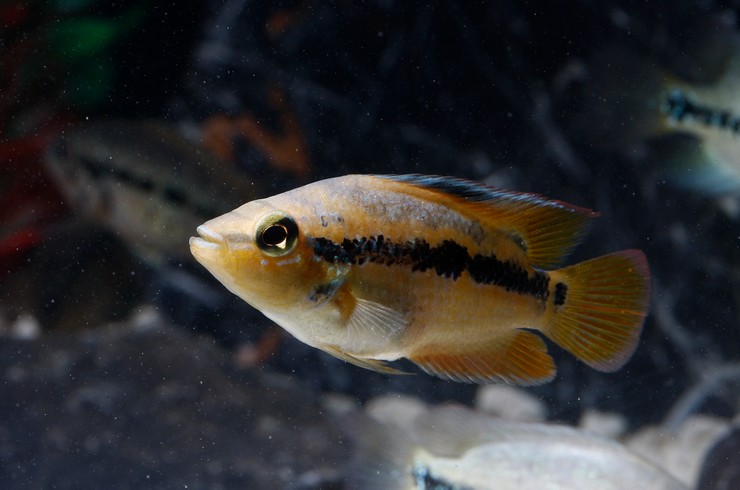 An aquarium with Salvini’s cichlazoma must be equipped with the following devices:

It is worth noting that fish do not like bright lighting, so it will be useful to dim it with the help of floating plants (Riccia, Pistia).

Every week it is necessary to replace 20% of the water in the aquarium with fresh water. This will prevent the accumulation of hazardous metabolic products. When using tap water, you should always prepare it with the Tetra AquaSafe conditioner, which instantly removes chlorine and heavy metals from the water, and adds useful vitamins and natural colloids to protect the gills and mucous membranes.

Cichlazoma Salvini is characterized by increased aggressiveness, males are especially dangerous during the spawning period. At this time, they attack even fish larger than themselves without fear. It is better to keep the cichlase Salvini alone or in pairs. It is very important that heterosexuals grow together in the same aquarium from childhood. Only then can peaceful coexistence and spawning be achieved. Attempts to add a female to an adult male will most likely end in her death. 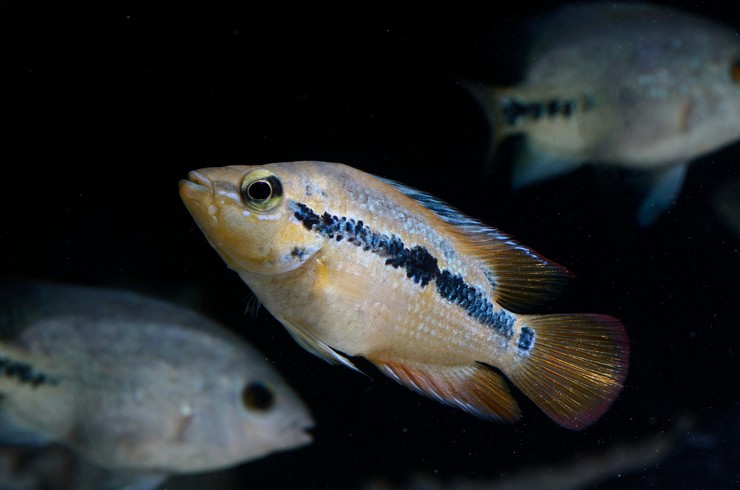 The rest of the time, in addition to the breeding season, the Salvini cichlazoma can coexist with other large cichlids: diamond cichlazoma, Managua, black-striped, Blue Dempsey, as well as astronotuses and acars. But this is provided the aquarium of a suitable size! Large catfish are also suitable: pterygoplicht, plekostomus, synodontis.

Content with small ornamental fish: neons, guppies, tetras, etc. is completely excluded. All these babies will be eaten by the predator.

Cichlazoma Salvini is definitely not suitable for a community aquarium with small fish such as neons or guppies. These are predators that perceive small fish only as food.

Ciichlazoma Salvini is a typical predator, the basis of the diet of which in nature consists of large invertebrates and small fish. But this species does not hesitate to eat plant foods, so at home, it is recommended to provide both types of food.

It is not recommended to use live and frozen food, they do not contain the full range of nutrients, and often act as a source of infections in the aquarium.

The best choice will be quality dry food specially formulated for cichlids. They fully provide fish with high-quality proteins, contain vitamin complexes to promote health and longevity, as well as specialized additives, such as color enhancers or algae concentrate.

Tetra Cichlid Algae Mini, due to the ideal combination of animal and plant products, is perfect for daily feeding of Salvini cichlazoma. The floating balls are easily spotted and eaten by cichlids.

And Tetra Cichlid Color will make your pets even brighter, because it contains natural color enhancers, thanks to which yellow and red shades of your fish will sparkle with renewed vigor.

Salvini’s cichlazomas are well accepted, floating sticks for all types of cichlids Tetra Cichlid Sticks and innovative flakes Tetra Cichlid Crisps, which are distinguished by their increased nutritional value.

It is very easy to pamper your domestic predators with Tetra FreshDelica’s natural nutritious treats: bloodworms or brine shrimp will suit Salvini’s cichlazomas.

It is best to feed the fish several times a day because a well-fed pet is less prone to aggression.