Talking about the colorful cichlids of Central America, one cannot fail to mention Eliot’s cichlid, one of the most attractive aquarium fish, which, on top of that, is peaceful and easily reproduces in the aquarium. We will tell you about how to keep this colorful beauty in our article.

Eliot’s cichlazoma (Thorichthys maculipinnis, formerly Thorichthys ellioti) is a freshwater ray-finned fish from the Cichlov family. It has an attractive body coloration, calm temperament, and medium body size, which made it extremely popular in the aquarium hobby.

The first scientific description of the species was made in 1864 by the Austrian scientist Franz Steindachner. However, this information did not appear anywhere for a long time, until, in 1904, the researcher Mick (Meek) “rediscovered” the species anew, giving it the most famous name – Eliot’s cichlazoma. It is under this name that the fish is known to most aquarists. 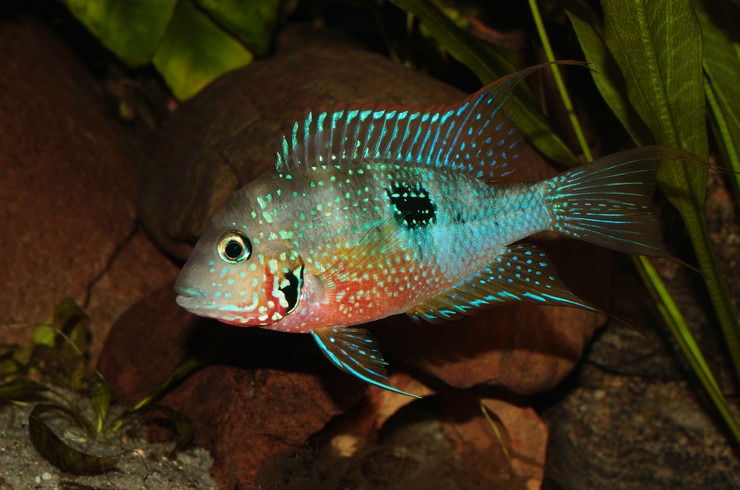 The species is unpretentious in care, therefore it can be recommended for keeping beginners “cichlovodists”.

Most of the time, Eliot’s cichlazoma gets along well with other fish, only during spawning, it shows aggression. It can rightfully be attributed to the group of dwarf cichlids.

Many cichlid lovers believe that Eliot’s cichlazoma is one of the most beautiful aquarium fish. It bears a strong resemblance to Meek’s cichlazoma, however, the red spot on Eliot’s abdomen is much larger.

The appearance of the fish will definitely not leave anyone indifferent. The body is elongated, slightly laterally compressed. The head is pointed, with a large mouth and fleshy lips. The eyes are large. The maximum body size of a fish is 15 cm, but usually, in an aquarium, it does not exceed 12 cm, males are larger than females.

The color of Eliot’s cichlazoma is difficult to describe in words because it is a real rainbow of colors. The main background of the body is silvery or bluish. A large red spot that occupies most of the abdomen is striking.

The whole body is dotted with small shiny spots, which “flash” at a certain angle of illumination, making the fish even brighter. In the head area, the spots merge into lines. 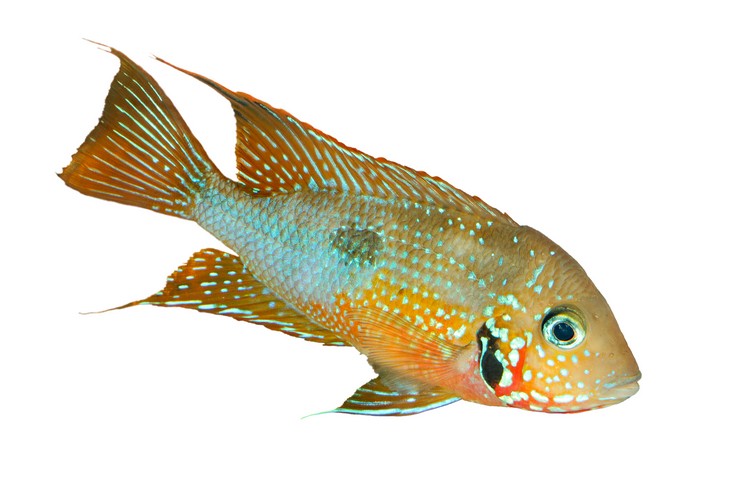 A large black spot is located on the sides of the body. You can also see the dim transverse stripes stretching from the back to the abdomen. Sometimes a narrow black stripe from the eyes to the tail appears.

Full color is manifested only in adults, fry has a nondescript color.

The life span in an aquarium is 10 years.

The homeland of Eliot’s cichlazoma is Central America. Fish can be found in the waters of the Atlantic slope. Prefers slow-flowing rivers. 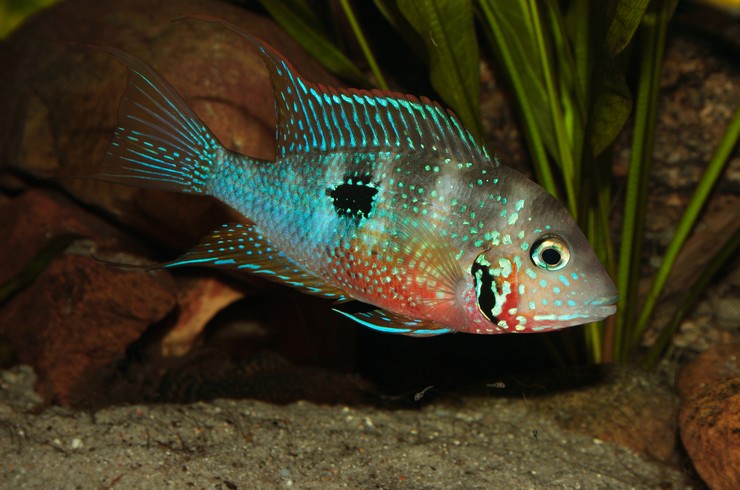 The fishes keep in schools near the coast in places with sandy or muddy bottom, thickets of plants, and a large number of fallen leaves. They find shelter among snags and plants.

The water in these areas often has a characteristic “dark” color due to the high content of humic substances, although fish can also be found in clear water.

The optimal volume of the aquarium for a couple of Eliot cichlases is 100 liters. It is best to decorate it in a natural style, using stones, driftwood, and live plants. Particular attention should be paid to the soil in which fish like to dig in search of food. It should not be too large and have sharp edges: sand or small rounded pebbles will do. It is better to choose a light color of the soil, as in nature. If you have a group of fish, be sure to zone the aquarium with decorations so that each individual has their own territory.

It is not worth planting a lot of live plants. It is advisable to focus on large and hard-leaved species (anubias, echinodorus, cryptocoryne, etc.). They must be fixed or planted in separate pots, to which access should be limited. Otherwise, the plants will be dug up. The more swimming space the cichlazes have, the better. 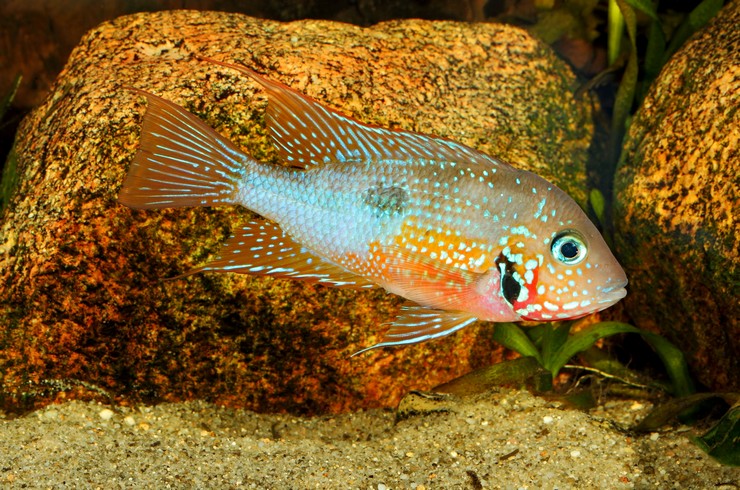 It is important to provide quality filtration and aeration in the aquarium. It is better to install an external filter, it is more effective in cleaning medium to large aquariums. The lighting should not be bright, you can dim it with the help of floating plants: riccia, hornwort, pistia. Eliot’s cichlazoma is a thermophilic species, so there must be a thermostat in the tank.

Change 20% of the aquarium water once a week. This will prevent the accumulation of harmful metabolic products. Do not forget that tap water is not suitable for fish life, it often contains chlorine compounds and heavy metals, which can lead to the death of pets. Therefore, when using tap water, be sure to prepare it with Tetra AquaSafe Conditioner, which will instantly make it safe. It is useful to add Tetra ToruMin to the water to recreate conditions as close to natural as possible. It contains natural peat extract, which creates the effect of “black” tropical water.

Eliot’s cichlazoma is one of the best species for keeping in communal aquariums. The fish is unusually peaceful, and only during the spawning period does the aggressor wake up in it.

It is possible to keep cichlazes not only in pairs but also in groups because in nature the fish flock into flocks with a clear hierarchy. The usual way to sort things out is to show off their beauty remotely and “flip” their tails. Clashes between individuals are not dangerous and do not lead to serious injuries. 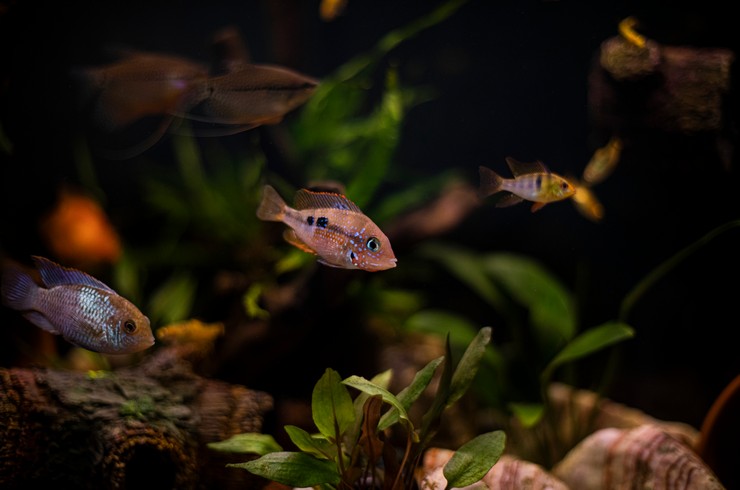 Large cichlids such as Flower Horns or Astronotuses will keep the fish under constant stress, so it is best not to keep them together. Small species that can fit in the mouth of cichlazomas are not suitable for living together: neons, zebrafish, rasbora, shrimp, as well as any veiled breeds: goldfish, cockerels.

Cichlazoma Eliot belongs to omnivorous fish. This means that her diet should include both animal and plant foods. The latter should be at least 30%.

It is very harmful to feed cichlases exclusively with protein foods, for example, live and frozen bloodworms, brine shrimp, etc. They can lead to disruptions in the digestive tract of fish.

Good quality dry cichlid food is best for feeding Eliot cichlazoma at home. They are completely balanced, contain vitamins for health, longevity and cannot become a source of infection in the aquarium. They are well absorbed by the fish, which in turn reduces water pollution. It also contains special additives such as spirulina algae or natural carotenoids to enhance color. Tetra Cichlid Algae Mini Pellets, Tetra Cichlid Crisps, Tetra Cichlid Color Pellets have proven themselves well.

Cichlazoma Eliot has a tendency to overeat, so it is better to feed the fish in small portions, once a week arranging a fasting day.

Simple breeding at home is another coin in the popularity of Eliot’s cichlazoma. When choosing producers, there is one caveat: the pairs created by the aquarist do not always add up and produce offspring. The correct option is to let the fish choose their partner. To do this, they acquire a small school of fish – 6-10 pieces, and after they break into pairs, one of them is chosen for breeding. Eliot’s cichlazomas are monogamous, the family lasts for life.

The genitals are not very bright, but noticeable. Males are larger than females and have longer fins. Also, in females, there is a clear black spot on the dorsal fin, while in males it looks blurry. Sexual maturity in fish occurs when a size of 6-7 cm is reached. Spawning is stimulated by frequent changes, an increase in temperature, and abundant feeding. 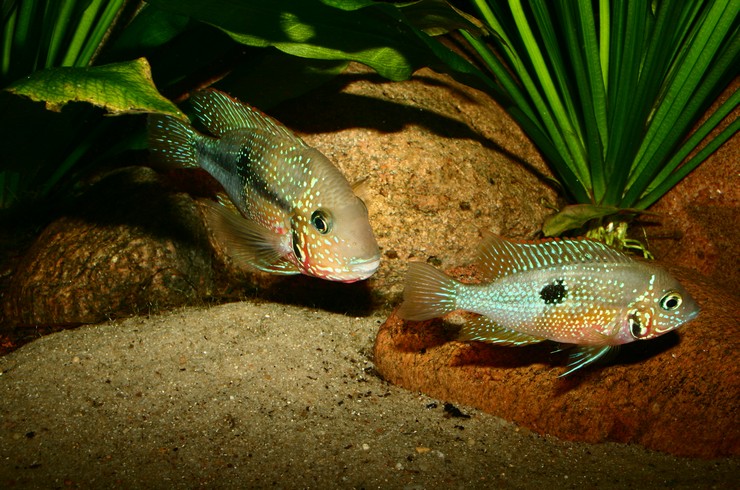 The breeding process is interesting. First, the mating dance follows, when the male demonstrates all his beauty. After that, the cichlids choose a place for themselves near a large stone, grotto, or another secluded place, clean it. The female lays several hundred eggs there. The male fertilizes them, and after that, the working days of the new family begin.

The incubation of eggs lasts about three days, after which the larvae appear, which feed on the yolk sac for another 3-4 days. Parents carefully transfer them to a separate nest (a hole dug in the ground), where they will live up to a size of 1-2 cm. All this time, Eliot’s cichlazomas follow the parental instinct and protect the offspring.