The cockatoo is a charming, incredibly beautiful, and intelligent parrot. Looking at his majestic crest and funny behavior, almost every lover had the thought of purchasing it. Cockatoo differs from other parrots not only in appearance but also in the specifics of care.
Many owners of these beauties, faced with difficulties in care and education, return the pet back to the breeders or sell it to other hands. We will try to introduce you as closely as possible to this difficult species of parrots so that the purchase decision does not become a mistake. 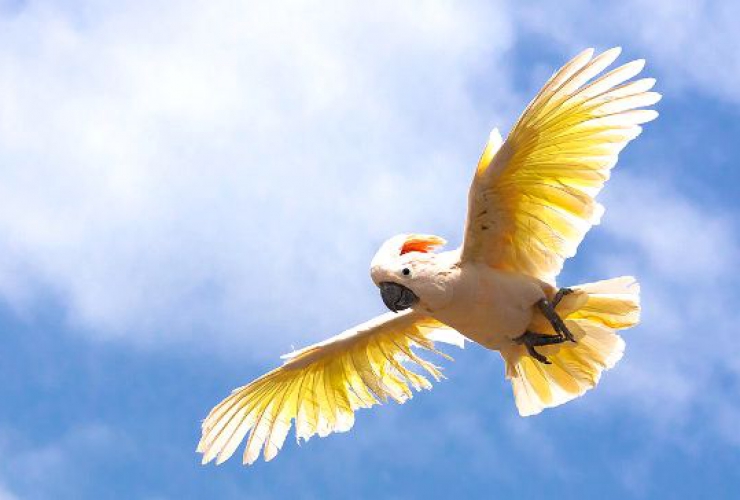 Depending on the species, cockatoos are medium-sized with a body length of 30 cm and large – up to 70 cm, a parrot can weigh more than 1 kg.
Their most distinctive feature is the elongated feathers on the crown and forehead, the so-called crest. The color of the “crown” in most cases contrasts with the main color of the parrot. The color of cockatoo feathers contains a wide variety of colors and shades: white, yellow, red, pink, and even black. But, oddly enough, you will never find the shades of blue and green that are popular with other species of parrots.
Another distinctive feature of this type of parrot is its unusual beak. It is massive, long, and very curved. The mandible in the widest part is wider than the mandible and therefore the edges of the mandible are found on a narrower mandible, forming a kind of bucket.
This beak structure is found only in the cockatoo. At the same time, the beak is very strong and powerful. The parrot can easily turn the wooden rods of the cage, pieces of furniture, and much more that gets in his way into a pile of chips.
The tip of the fleshy tongue is covered with a dark, almost black cornea. The tongue has a kind of hollow, which the parrot uses very skillfully, like a spoon. The eye rings are bare and feathered. Cockatoos fly pretty well but climb trees much better. They also move very quickly and skillfully on the ground.

Cockatoo in the Wild 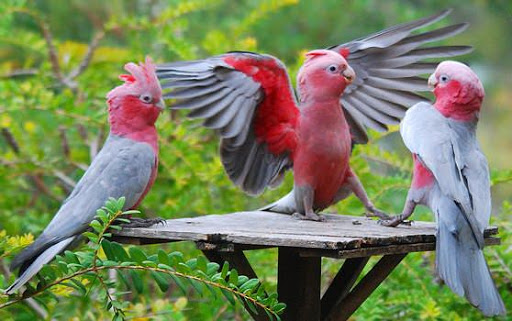 In nature, the cockatoo is found in New Guinea, Australia, the Philippine Islands, and Indonesia. This parrot is able to adapt to many types of environments, as evidenced by the territory of their distribution.
Australian cockatoo species prefer to settle in open areas in large flocks. This subspecies uses trees only for lodging and nesting, and the rest of the time the birds devote to the endless savannas of Australia.
Other species tend to hide in tree crowns and live in small flocks or pairs. As for the Indonesian cockatoo, these birds live in the tropical and subtropical forests of the country or at their edges in wetlands.
Absolutely all types of cockatoos prefer hollows in tree trunks or crevices in rocks for nesting. Birds choose a ready-made hollow and adjust its size to a more suitable one with the help of their beak, and cover the bottom with tree bark.
Despite the fact that the number of parrots in groups is quite large, during the breeding season, the nests of these birds are dispersed over very large distances (up to 500 ha). The couple becomes extremely aggressive and does not allow other cockatoos to interfere in their territory during this time.
In the wild, cockatoo parrots feed successfully, both hiding in tree crowns and on the ground. They hunt insects, larvae, eat fruits, berries, fruits (melons, wild figs), capers, flowers, tree shoots and leaves, grass seeds, roots, and nuts (almonds, pecans). Some species willingly eat grains of cultivated plants (oats, wheat, corn), tree seeds (acacia, cones, eucalyptus).
Since the main source of food for Australian cockatoo species is on the ground, some of the birds in the flock are very careful about safety, while the rest are eating nuts and seeds.
Cockatoo is not alone. Any subspecies of these parrots live in a flock. The need to unite in groups is to some extent explained by survival (the instinct of self-preservation): only by uniting, birds can provide themselves with protection from predators and good nutrition.
Cockatoos are also very social: they constantly communicate with each other, distinguish the cries of their relatives, constantly talk with each other, take care of each other. Feather cleaning is an important part of a parrot’s hygiene and mental well-being. The beautiful plumage of a cockatoo in a flock is the result of the care of its relatives.
Cockatoo parrots are monogamous. Having met the “bride”, the male spends his whole life with his companion, often after the death of one of the partners, the other remains alone. The reason for this devotion is intimate attachment.
Male and female take care and protect each other. The bird can clean and smooth feathers for its chosen one for hours.
Cockatoo spends a lot of time together and after the breeding period, the pair is finally formed. Parrots take care of their offspring almost equally: the male also actively helps the female to feed the chicks.
The female incubates eggs for 20-30 days, depending on the species of cockatoo. Chicks are born naked and blind, but after a week their eyes open, and “stumps” of future plumage appear. Cockatoo chicks are very dependent on their parents and at first, they are completely helpless.
In the wild, chicks leave their nest after 12 weeks, but parents continue to protect their offspring until puberty. Having flown out of the nest, a young bird gets acquainted with the surrounding world and its rules by the example of its relatives.
It happens that later the cockatoo joins a neighboring flock, but more often the parrot prefers to stay in the company of relatives and among well-known places.
Depending on the species, cockatoos reach sexual maturity at 3-5 years of age. Cockatoos can live 90 years in captivity, but this is not the case for wild parrots of this species. Predators, natural disasters, and natural disasters significantly shorten the life of birds living in their native places. 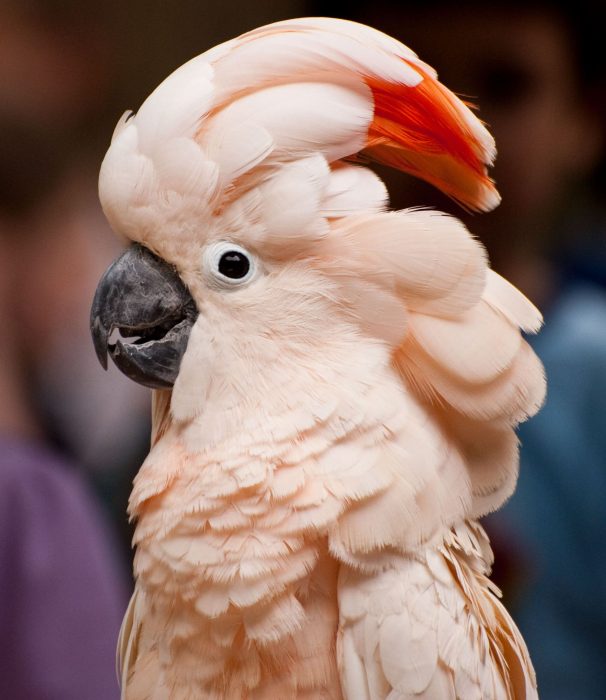 The content of the cockatoo is similar to that of other large parrots. This should be a large cage or aviary. Their top can be with a domed top, strong metal rods, which the parrot cannot break with its powerful beak and reliable, preferably two, locks. The size of the cage should be at least 120 * 90 * 120 cm, and the aviary should be 6 * 2 * 2 m.
The parrot cage should have a retractable bottom so that it can be easily washed and cleaned. In the aviary, it is imperative to provide a house made of wood, where the parrot will sleep.
Cockatoo loves to swim and does it with pleasure every day. If the air temperature in the room is sufficient, put a container with warm water for the bird or spray the parrot from a spray bottle – this will completely replace the bathhouse.
A large cat tray is perfect as a bathing suit, if the cockatoo does not recognize this method, offer him a shower, because in nature they willingly bathe in the rain.
When keeping a bird, it is very important to keep its home clean. The drinking container and feeders must be cleaned every day. Perches and toys are best washed and replaced as they become dirty and destroyed.
The cage must be washed every week, and the aviary once a month. The bottom of the cage is cleaned daily, and the bottom of the enclosure is cleaned twice a week. The optimum temperature for keeping cockatoos is considered to be 18-20 degrees.
Cockatoo very skillfully uses their beak: they are able to open almost any locks. This must be borne in mind when choosing a method for closing the cage: the lock should only be opened with a key. The strong beak of the cockatoo is also capable of gnawing and splitting much that it comes across.
Therefore, when you let him fly around the apartment, do not leave him unattended. He can begin to gnaw furniture, where poisonous paints and varnishes are present, or climb on a desk, where there are many small parts that he can choke on.