Collie (Scottish Shepherd Dog) is very smart and quick-witted, it is easy to train in any direction, has natural intelligence, and can make decisions on its own, for which it is appreciated in work. Country of origin – Great Britain.

Collie personifies canine beauty, intelligence, and personality. This beautiful breed is a real symbol of the sincere friendship between man and dog. Looking at the Collie, immediately recall the series with the participation of the pet – “Lassie”. 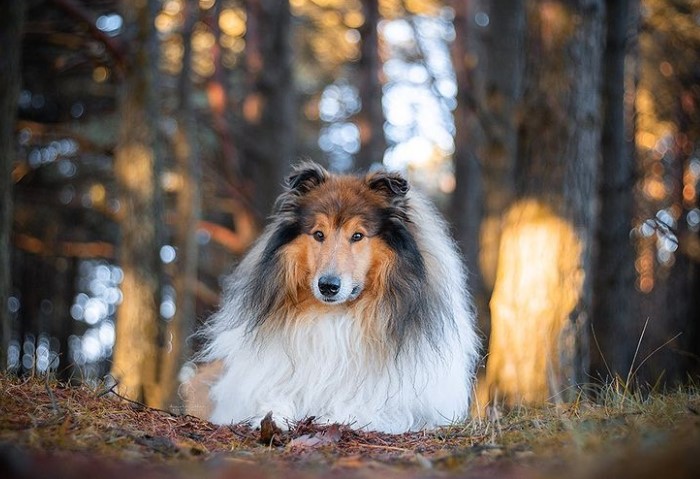 Despite the name, Collies are not entirely Scottish in origin. It was brought to this country as a ready-made breed, and here it only received further development and improvement. It is believed that her ancestors were the English Shepherd Dogs, the British Greyhound, and the Irish Setter.

The origin of the Collie is a mystery with at least two opposite versions. Some researchers say that the ancestors of the Scottish Shepherd Dog were brought to Northern Europe by Roman legionnaires. Others argue that by that time Britain already had its own herding dogs. Most likely, the breed was formed due to the connection between the aborigines and the dogs of the conquerors.

The breed is very old and has more than 500 years of history. Until the mid-19th century, the Collie was practically unknown in the world, but Queen Victoria’s journey through Scotland changed the fate of the breed. Fascinated by the intelligence and nobility of the Scottish Shepherd, the Queen returned from a trip with several puppies, whose appearance at the residence, of course, did not go unnoticed.

Outstanding mental abilities and incredible working qualities soon made Collie very popular not only in England but all over the world. The breed was officially recognized in 1914, at the same time, dog breeders began active selection, which was aimed at improving the exterior while maintaining working qualities. 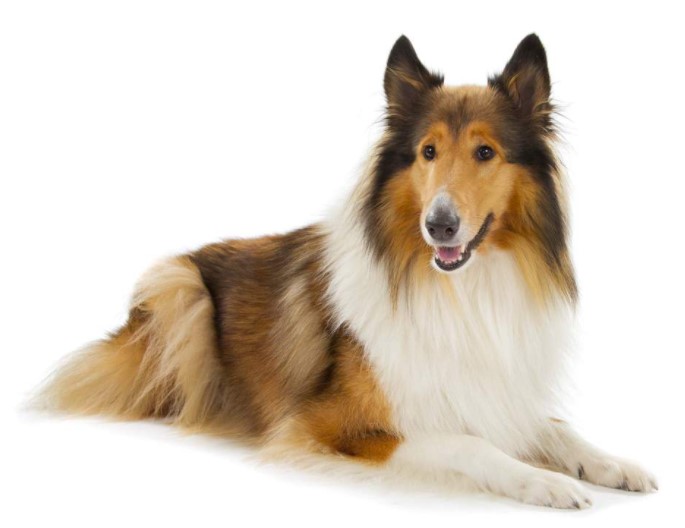 Collie is a slender aristocrat with a slightly sly expression of a long muzzle and the same sly look. Despite the fact that today’s individuals are no longer herding sheep that have strayed from the herd, a strong build, without a bias in the roughness and dampness of the skeleton, remains the defining feature of the breed. As for the dimensions of the long-haired shepherd dogs, each standard describes them differently. For example, in the opinion of FCI experts, the growth of an exemplary Сollie dog is 56-61 cm, females – 51-56 cm. At the same time, the AKC (American Kennel Club) offers its own standards: 61-66 cm for “boys” and 56-61 see for “girls”.

Abundant straight hair, reminiscent of an exquisite coat, complemented by a lush collar and fluffy tail, is another spectacular attribute of the long-haired breed. Main colors: 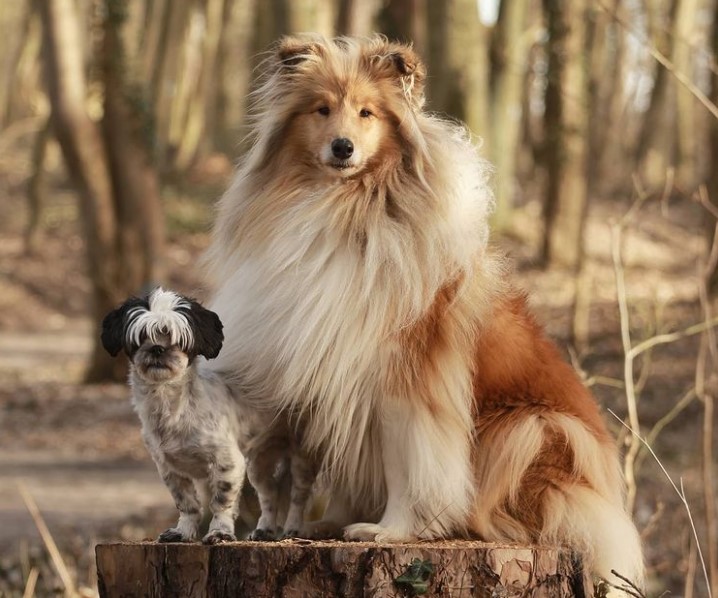 Well-bred pets are distinguished by a high degree of loyalty and responsiveness. Collie is considered a family dog. She is affectionate and loves to play with children, look after them. Small puppies of this breed are usually very active and curious. Animals quickly get used to new people and play with them willingly. At this time, it is customary to instill in the dog certain qualities. Collie loyalty knows no bounds. She, not thinking about herself, will rush to save the owner from fire and water. But other qualities of her character are due to 3 factors:

Scottish Shepherds try to imitate their master in everything, to adapt to his lifestyle. Athletes, also try to perform various exercises, do races. They take part in competitions with great pleasure. In families with babies, pets will happily take on the role of a nanny. For people who lead a measured lifestyle, Collies become attentive friends and good companions for walking. If the dog goes through a special training course, it can become an excellent guide for the blind.

It is worth remembering that a Collie puppy is not a toy. The dog does not recognize rough treatment and abuse. The best parenting methods are based on affection and fairness. The owner should be an example for the pet, a calm and self-confident person. 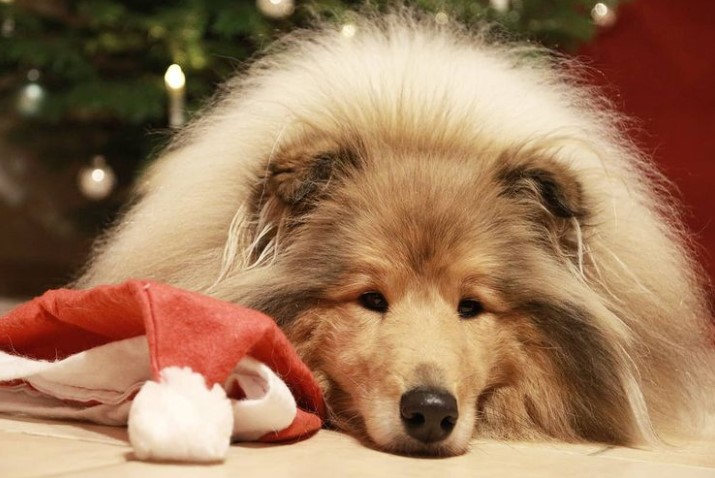 Collie will feel great both in an apartment and in a private house, the main thing for her is attention, company, and constant walks. They love children very much, treat them with special care, and are always happy to play. Despite the fact that Collies have a long and thick coat, caring for them is not laborious. It is advisable to comb the dog with a special comb once a week. During the molting period, the undercoat is removed with a slicker brush. Particular attention should be paid to the fur behind the ears, on the neck, dewlap, and on the thighs. They bathe as needed, more often, during the molting period, then the dog needs to be vigorously combed out. Ears, as they become dirty, are wiped with a damp cotton swab. The nails have to be trimmed sometimes. 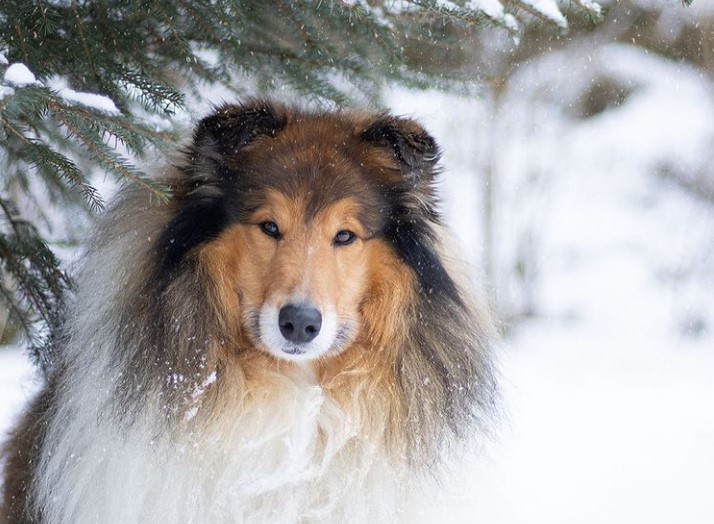 Collie can be classified as a pet that does not have congenital ailments, and with proper care, has good health. But whatever one may say, but there are some diseases inherent in this breed of dogs. Collie has a predisposition to the following ailments: 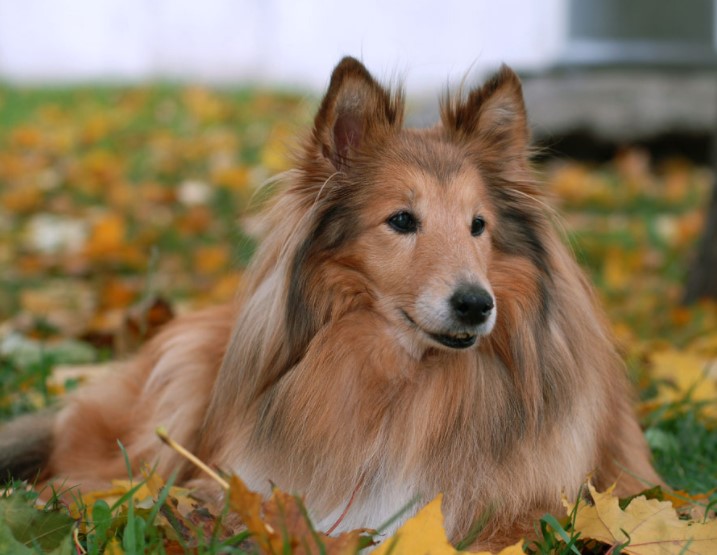 A Collie dog is distinguished by wisdom and good nature. The pet is suitable for almost everyone: both large families with babies and lonely sedentary people. The dog will adapt to any lifestyle of the owner. The behavior of the animal at an early age requires some adjustment. The process of raising and training a Collie requires the patience of the owner. This Scottish Shepherd Dog makes excellent guides and nannies for small children.