German Shorthaired Pointer is well suited for active people. This is a real hunter who was born in Germany. These dogs can hunt anytime, anywhere: in the field for a mouse, or in the forest for large animals. However, such a pet will not cause trouble if it is kept in an apartment. And although the German Shorthaired Pointer loves hunting, he gets along well with other pets in the house. This is a well-bred dog friendly with strangers. She is completely devoid of aggression. 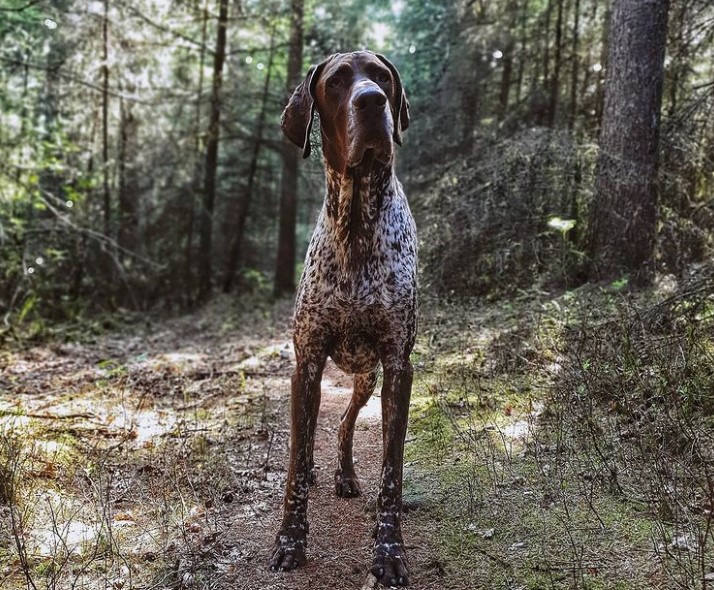 The history of the breed begins in the Mediterranean countries, where dogs of this type were used for tracking and catching birds and falconry. Dogs came to Germany from Spain, Flanders, and France, and their distinguishing feature was the ability to indicate prey. This property became even more in demand with the beginning of the use of weapons in the late 18th century. In Germany, Pointers began to breed with native breeds that specialized in attacking and bringing prey. But the more popular was a universal hunting dog, which would not only indicate, but also pick up and bring a bird or other living creatures. Already at the end of the 19th century, Shorthaired Pointers did an excellent job with this task. Externally, however, they were far from today’s phenotype. The dogs were heavier, had a thick throat dewlap, sagging back, and soft paws. We worked more slowly and calmly. German dogs were actively crossed with Pointers to facilitate their appearance.

In 1872 the breeding work with the German Shorthaired Pointer was almost completed and the studbook was opened. After 7 years, the first standard was already drawn up, and the final version of the description of the breed was approved in 1912. In a relatively short period of time, the German Shorthaired Pointer took on a modern look, and breeders to this day follow the motto: “versatile, noble, reliable and easy to breed.” 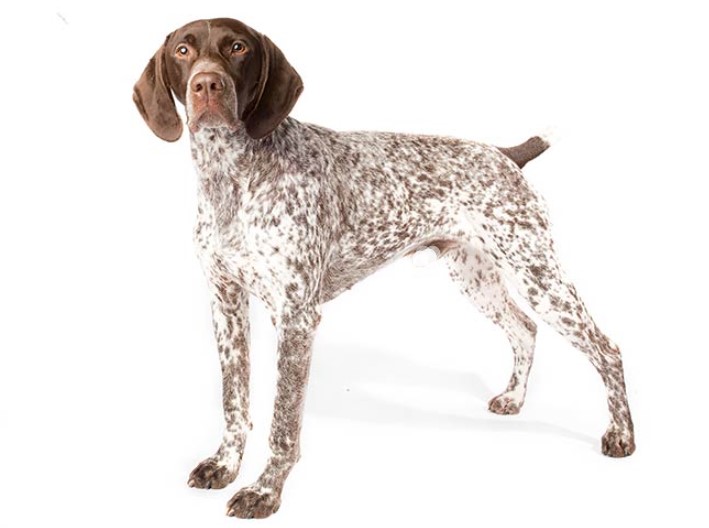 Externally, the German Shorthaired Pointer gives the impression of a noble, swift, hardy, and strong dog, which he really is. The physique is harmonious with the correct posture and smooth lines of the body. The size of the dogs is average. Males are more powerful and strong than females. The average height is 60-65 cm. The standard defines the German Shorthaired Pointer as a versatile hunting breed.

The head is dry and well-defined, in line with the size of the dog. The skull is slightly rounded, moderately wide. The muzzle is long and wide. In profile, a slight hump on the nose is noticeable, more pronounced in males. The eyes are medium in size, dark brown in color. The ears are set high and wide, of medium length, flat and drooping. The nose is slightly protruding, the nostrils are mobile and wide, the color is usually brown, but in black dogs it is black. The lips fit tightly, well pigmented, the edge is almost vertical in front, then it bends smoothly. The jaws are strong, the bite should be perfect scissor.

The height at the withers is slightly higher than the length. The withers are well defined. The topline is straight and slightly sloping. The back is strong, the loin is straight or slightly arched. The tail is set high, strong, of medium length. In a calm state, it hangs down, during movement it is kept horizontally, but not above the back. The tail is docked approximately in half, but can also remain in its natural form, straight or saber-shaped, it should reach the hock joint. The chest is more developed in-depth. The legs are parallel, placed under the body. The feet are well arched, the toes are tightly knit with strong nails and rough pads.

The coat is dense, short, rough, and rough to the touch. Slightly thinner and shorter on the head and ears, and slightly longer on the tail. Several colors are allowed. 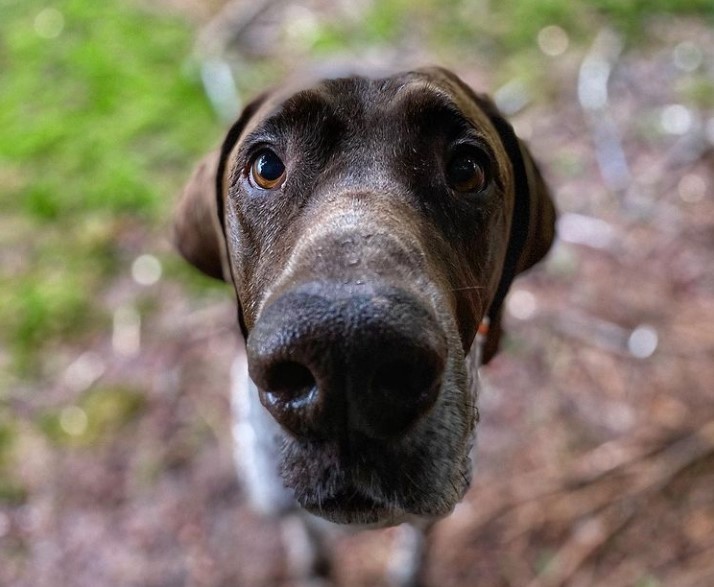 At home, Shorthaired Pointers are very docile, obedient, calm, and sociable, there is no aggression in them, they are peaceful and benevolent. Somewhat restrained in the expression of feelings. They mistrust strangers. Pointers do not bite, but they love to bark and therefore are good watchdogs.

Shorthaired Pointer may seem calm, even somewhat phlegmatic. Unlike the Spaniel and the Setter, he is not playful, does not really like to tinker with children, and does not bother the owners with his attention and excessive love. But as soon as it comes to walking, and even more so about hunting, the dog transforms and turns into an indefatigable assistant who will not sit down until the work is finished. In everyday life, the Shorthaired Pointer is unlikely to amaze you with intelligence as on a hunt. 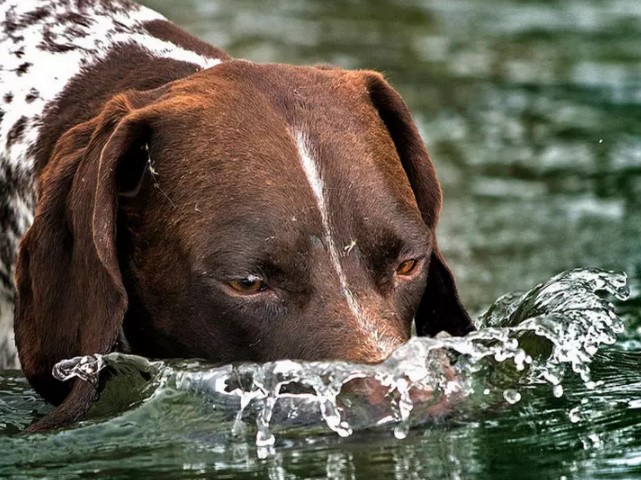 As conceived by the German breeders, the Shorthaired Pointer requires minimal maintenance. If the dog lives in the house, weekly brushing of the coat will minimize the number of lost hairs and contribute to the coat’s natural renewal. During the period of pronounced seasonal molting, it is better to comb the dog daily. Shorthaired Pointers do not need frequent bathing. If necessary, wipe the wool with a damp cloth. Hanging ears should be inspected regularly and cleaned of accumulated wax and dirt as needed. This is an important point in the prevention of ear diseases. When it comes to oral hygiene, your puppy can be trained to brush its teeth or limited to special treats and toys. 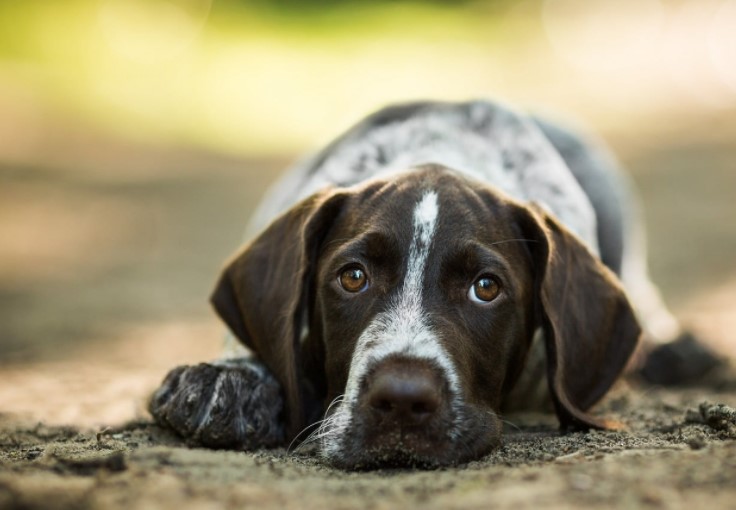 Shorthaired Pointers are strong and hardy dogs that easily adapt to different climatic conditions, hunt without difficulty in windy weather, and climb into the water for a bird. To maintain their well-being and health, it is necessary to adhere to the same preventive measures as for other dogs, you need an annual vaccination against infectious diseases, regular treatment against internal and external parasites, and of course a balanced diet. The breed has a predisposition to some genetic diseases: