Representatives of the Pufferfish family are very interesting fish that captivate with their unusual body shape, color, and extremely funny forms of behavior. Unfortunately, most species are quite difficult to keep at home, as they naturally live in brackish water. A pleasant exception is a dwarf tetragon, which will be discussed in our article.

Unlike most of its congeners, this is a completely freshwater fish. By its unusual behavior, it can only be compared with cichlids. The dwarf tetragon is able to recognize the owner, and when a person appears, it persistently attracts attention to itself with fussy movements. When a new object is detected in the field of view, he always tries to swim closer and examine it.

Moreover, the predator is fearless, because it easily attacks fish that exceed it in size. This fish also perfectly destroys snails, crushing their shells with the help of their “teeth”.

Like other Pufferfish, the pygmy tetragon, in the event of a threat, is able to inflate its stomach, visually increasing in size. This often happens after the tetragon is swallowed by large predators, which leads to the death of both fish. The family of the Four-Teeth is characterized by the presence of mucus-secreted venom in most species. Information about the toxicity of the integument of the dwarf tetragon is controversial, so it is still not recommended to touch it with your bare hands.

The dwarf tetragon fully corresponds to its name, because the length of an adult does not exceed 3 cm. The abdomen is rounded, the body is dense, tapers towards the caudal fin, the back has a hump. There is a small mouth and large eyes on the head. They have the ability to move independently of each other, which makes it possible to control the situation while in one place.

The pelvic fins are absent, the pectoral fins are very active, allowing the tetragon to abruptly change direction and move “in reverse”. 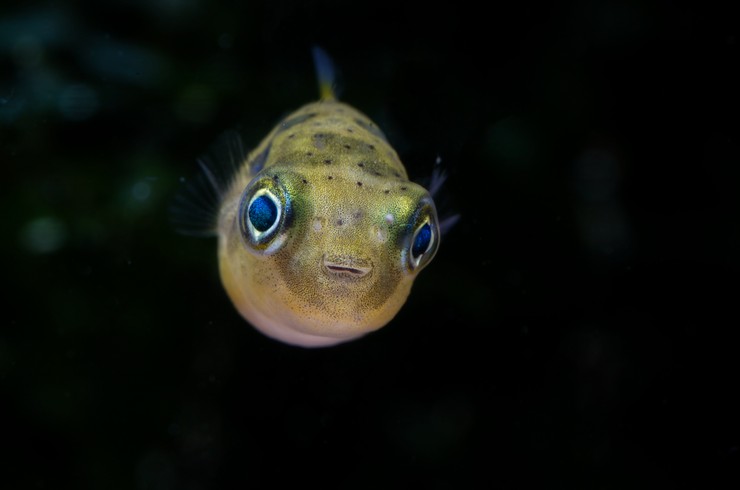 The color varies from dark brown to green with large dark spots on the body. The abdomen is white or yellowish. Males are brighter colored and have a dark yellow stripe on their belly. The color may vary depending on the mood of the fish.

One of the manifestations of the tetragon’s defense reaction is tail bending. This can be noticed immediately after entering the aquarium, but it quickly disappears when the fish finishes exploring the territory. Then this feature will manifest itself only during rest or when studying unfamiliar objects.

In nature, dwarf tetragon lives in the state of Kerala (South India). Fish are found in the Pamba River, which flows into Lake Vembanad, and the source is high in the mountains. The river is characterized by a slow flow and a lot of aquatic vegetation. Thus, the dwarf tetragon lives exclusively in freshwater, therefore, when kept in an aquarium, there is no need to add salt to the water.

Since the size of the dwarf tetragon is very small, this fish will be an excellent choice for nano aquariums from 30 liters in volume. It is better to keep it in flocks of 5-6 individuals. River sand mixed with fine daw is perfect as soil. It is desirable to have a large number of shelters so that the fish can divide the territory without problems. There are no special requirements for lighting, but in bright light, the color of the fish becomes richer. 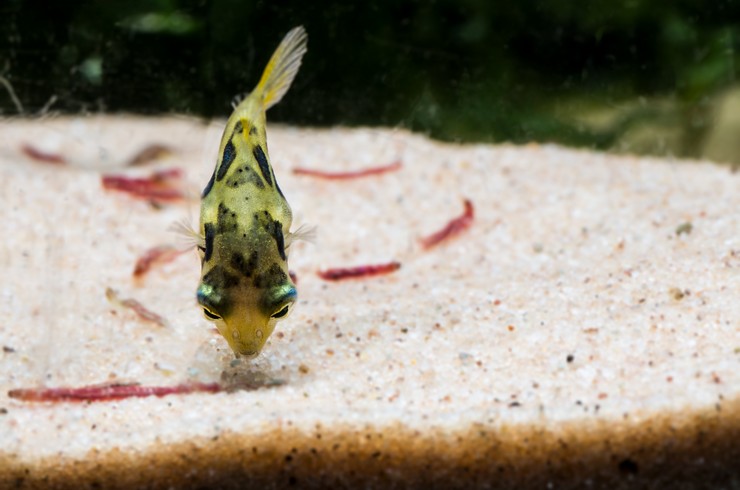 Dwarf tetragons are very sensitive to the content of nitrogen metabolism products in the aquarium, therefore it is important to ensure high-quality filtration and aeration. Adding salt, like many other types of tetragons, is not required. After all, the species lives only in freshwater. The current in the aquarium should not be strong, tetragons are unimportant swimmers.

Live plants must be planted in an aquarium with tetragons. You can choose any species because the fish are quite calm about greenery. It is best to create dense vegetation in the corners of the aquarium where the fish can hide. 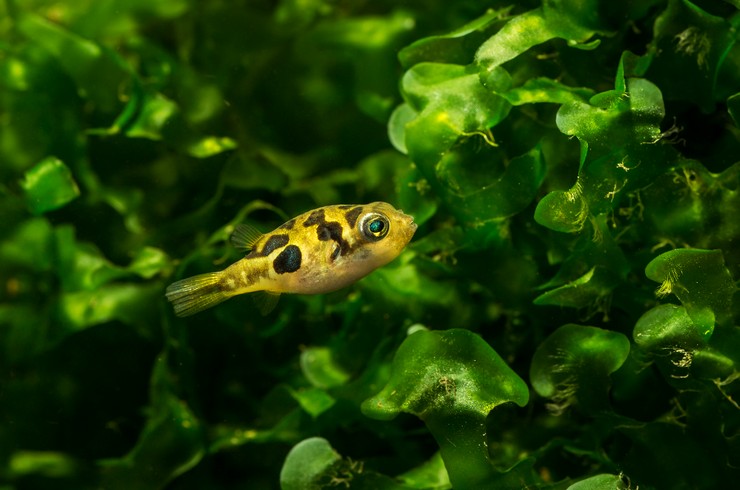 Dwarf tetragons are rather quarrelsome creatures. They will hunt small species of fish; large ones can attack and damage fins. Although there are cases of joint keeping with mobile fish species, for example, iris or barbs. The best choice will be a species aquarium, it is in it that all the beauty of the tetragon will be revealed. 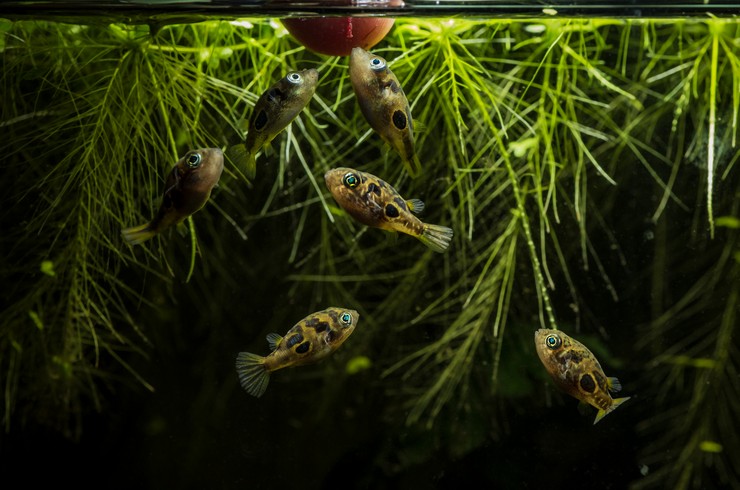 These fish are also completely incompatible with snails because mollusks are their main food. The situation is similar with shrimp: sooner or later they will be eaten.

Perhaps the most difficult problem with keeping a dwarf tetradon is feeding. In nature, the basis of the diet is snails, small crustaceans, insects, and their larvae. A similar diet will have to be recreated in the aquarium.

First of all, it is necessary to provide tetragons with small snails (Fizami, Melania, coils). These gastropods are not only valuable protein food: tetragons grind their teeth against the hard shells of mollusks. Therefore, it is best to breed food snails in a separate aquarium. The fish crushes the shells of small snails entirely, but if a large mollusk comes across, the tetragons remove it from the shell and eat it. Very often after that, a lot of debris remains in the aquarium, which must be removed with a siphon so as not to pollute the water. 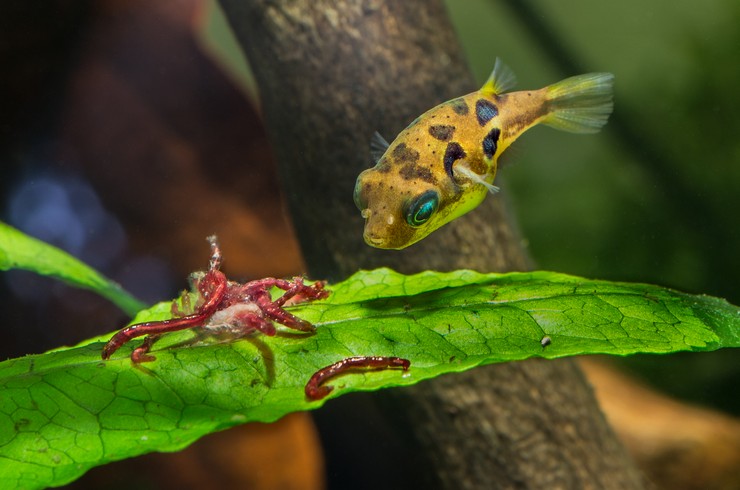 Unfortunately, dwarf tetragons are very reluctant to eat dry food – flakes or granules. Given their natural curiosity, Tetra FunTips Tablets may be attracted to fish. It is represented by tablets that stick to the wall of the aquarium. You can offer the fish food that resembles the insect larvae of Tetra Betta LarvaSticks. Dwarf tetragons should also like bloodworms in nutritional jelly – Tetra Delica Bloodworms.