The English Cocker Spaniel is an active, cheerful, athletic dog with excellent character and a very attractive appearance. The Cocker Spaniel is a tireless hunter known for his ability to track and hunt wild birds. Cocker is full of energy, his enthusiasm, and incessant tail wagging during work show how much he loves the hunt for which he grew up. 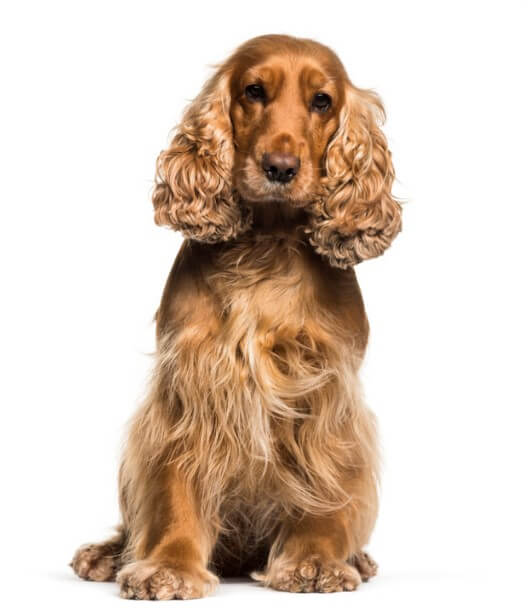 The English Cocker Spaniel is a very charming, cheerful, active dog with a sloping topline from withers to rump, square shape, strong skeleton, and strong muscles. The head of the Cocker Spaniel is in proportion to the body, well developed, without signs of roughness. The skull is somewhat convex, but flat between the ears, without protruding cheekbones and eyebrows. The stop is noticeable, but not sharp. The muzzle is of medium length, the filling under the eyes is high, the shape of the muzzle does not taper towards the nose. The nose is black, but a lighter, brownish color is also acceptable in dogs with relatively light colors. The lips are well pigmented, fleshy, but fit well to the jaws. The jaws are strong, strong, not narrow. The ears are set low, not higher than the eyes, hanging on thin cartilage, well attached to the head. The length of the ear should be such that the ear reaches the tip of the nose. The hair on the ears is long, pleasant to the touch, straight or slightly wavy, but without curls.

The eyes are not too large, but also not small, in the form of an oval, set wide apart. The color can be not only the traditional dark, but also slightly lighter, but only in dogs of red and mixed colors. The eyelids have a bright pigment. The teeth are healthy, not too large, without plaque, arranged according to the dental formula. The bite is correct.

The neck is slightly longer than the head, but not much, high-set, strong, with an elegant but strong nape line. The withers are clearly visible, passing into the top line, going somewhat down to the croup. Shoulder blades of the correct shape, comfortable for running. The back is strong, well-knit, not narrow, without deflections and humps, short. The loin is well-muscled, short, slightly protruding. The tail is set high but does not rise above the backline. Since the tail of the Cocker Spaniel has traditionally been docked for a long time, no selection was carried out for it. The chest is developed, it reaches the elbow joints, the correct shape. The belly is tucked up, but not lean. Legs without curvature, parallel. The rear ones are wider than the front ones. All legs, especially the hind legs, are very strong, with well-developed muscles. Feet are large, but not excessively, regular shape, round.

The coat is of medium length, double. Not rare, but not too thick either. The topcoat is silky but not fluffy, straight, or slightly wavy. Shorter on the head than on the body and legs. The undercoat is well developed.

The Cocker Spaniel comes in a wide variety of colors. But monochromatic dogs should not have impurities of other colors, except for a small white spot on the chest. With two or three colors, no color should prevail. In tan colors, the markings should be clearly defined.
Height: from 38 to 41 cm.
Weight: 12 to 15 kg. 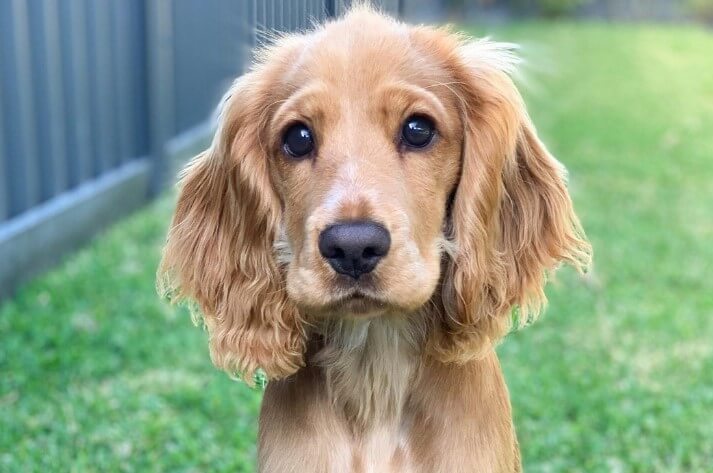 The English Cocker is a gentle, affectionate, and cheerful companion dog with whom it is always very pleasant to communicate. It seems that this dog remains a puppy for life, so tireless, full of energy and enthusiasm. At the same time, representatives of this breed are very intelligent: they quickly understand what is expected of them, and perfectly adapt to any lifestyle.
In recent decades, Cocker was often taken only as a pet, so many began to forget what an excellent hunter he is.

An interesting pattern was observed in this breed in relation to strangers. It is believed that multi-colored Cocker Spaniels are kind to everyone, they warmly and cheerfully greet even unfamiliar guests. Monochromatic English Cockers are more distrustful of outsiders and more focused on members of their social group.

Very loyal to their owners, the English Cocker is a great helper in work. He is so attached to the owner that he is ready to do anything for him, just to make him happy. Such a pet is happy only when surrounded by his family and therefore very badly tolerates loneliness. If you leave him alone for a long time, the case may end in damage to the owner’s things.

Extremely outgoing and friendly with all guests, this dog will never be a good watchdog. After all, meeting an intruder, happily wagging his tail and carrying his favorite ball, is not the most convincing technique for protecting territory. 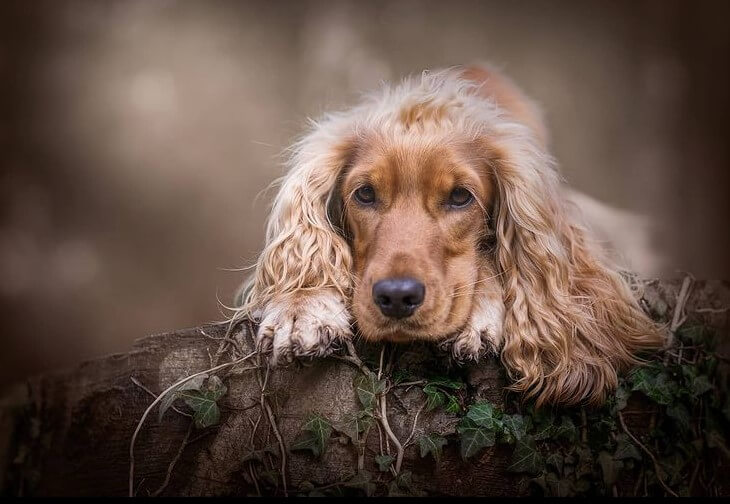 Caring for the coat of the show English Cocker is difficult for a beginner, so in such cases, it is recommended to contact a professional groomer. If your dog does not participate in exhibitions, it will be quite enough to comb his coat well several times a week, as well as regularly monitor the cleanliness of his ears.
During the year, the change of coat in the English Cocker is quite moderate but intensifies in autumn and spring. During this time, brushing the coat should be done daily. 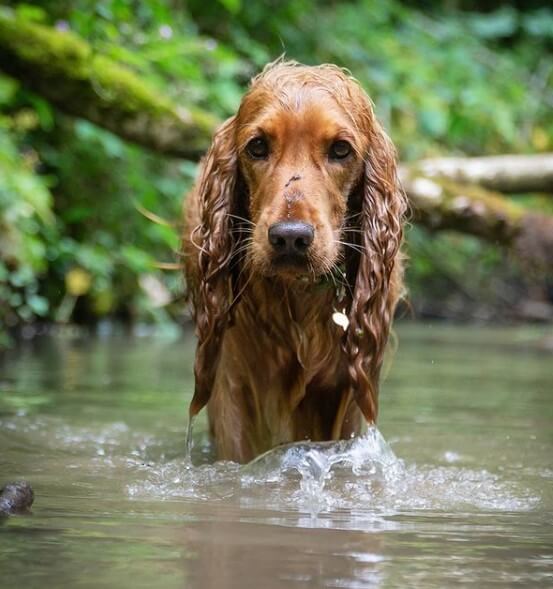 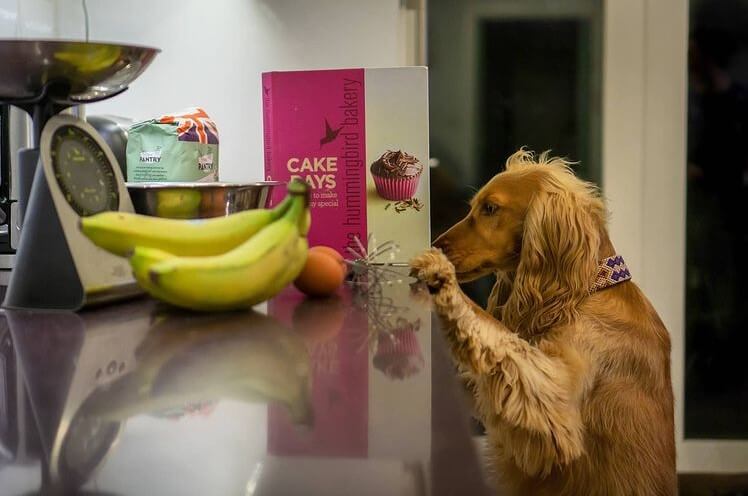 The English Cocker, a very good eater, tends to gain weight quickly, especially if he has limited physical activity. It is important that this perennially hungry look does not mislead you, and keep a close eye on the dog’s weight to avoid further health problems due to being overweight. 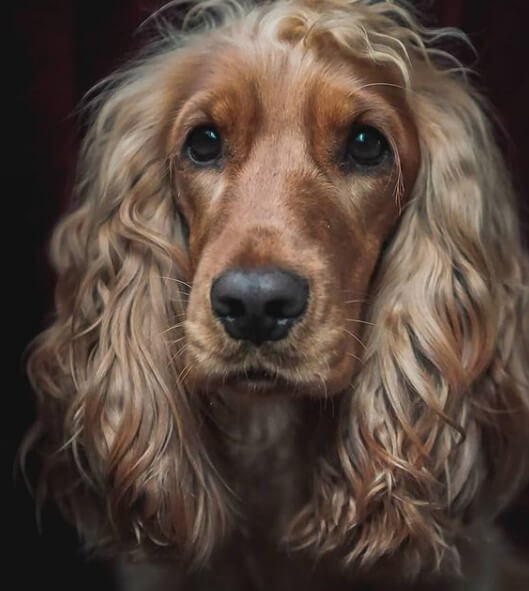 Spaniels were bred in England many centuries ago from dogs of Spanish origin. This happened long before the invention of reliable hunting rifles when bird hunters used dogs in tandem with nets and bows.

In those days, Spaniels were divided not by breed, but by type of work: there were water Spaniels and ground ones. Later, these dogs began to be divided according to size. In the 19th century, the popularity of dog shows and Victorian England’s love of classifying everything in the world led to different types of Spaniels becoming official breeds. Thus, the English Springer Spaniel, Field Spaniel, English Cocker Spaniel, and all modern British Spaniel breeds appeared.

Perhaps the most famous English Cocker Spaniel is the Lady from the 1955 cartoon Lady and the Tramp. The silky coat and cute appearance made Cocker a natural choice for character creation. English Cocker Spaniels have long been the favorites of the rich and famous. Actor George Clooney had a Cocker Spaniel named Einstein, whom he rescued from an animal shelter in California. The younger brother of Duchess Kate Middleton gave her the Cocker Spaniel Lupo as a wedding gift. David and Victoria Beckham have a Cocker named Olive. Dogs of this breed also lived in the White House. Presidents Truman and Nixon had Cockers named Feller and Checkers, respectively.