The English Setter is a beautiful breed of dog. Most of all in this breed, owners are attracted by the external data of the pet – black and white color with splashes. The unique dog is somewhat reminiscent of a Spaniel. Also, the English Setter is valued as a very educated and gentle dog. 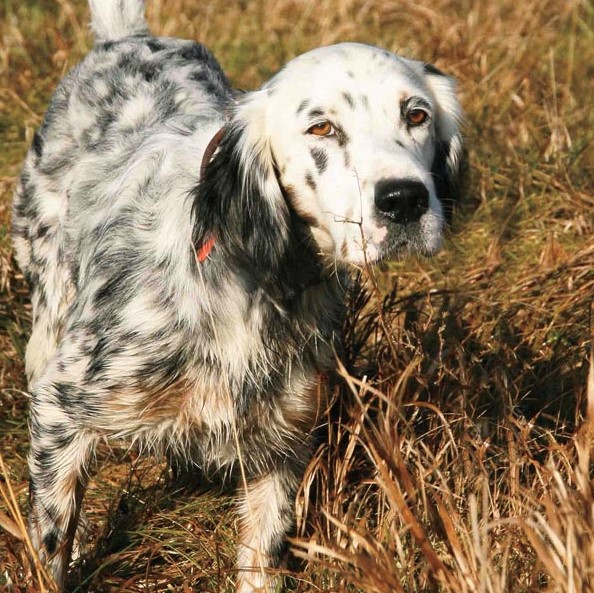 The English Setter is a dog breed officially bred in England specifically for hunting. This breed has gained particular popularity among hunters for its excellent search skills, combined with an ideal docile nature.

In its homeland in Great Britain, the Setter is called the dog of the lords. The majestic grace of an aristocrat is combined in a Setter with the great instinct and swiftness of a professional hunter. For several hundred years, the English Setter has been considered the best hunting gun dog. The English call Setters dogs, which, when they find prey, stop, thereby pointing at it to the hunter.

For many centuries in Great Britain, there was only one type of dog used in the hunt for any animal or bird – the Hounds. However, in the 11-15th centuries, the knights, returning from the Crusades to Britain, brought other dogs with them. From the countries of the East, they brought rather large Hound dogs with heavy bones and drooping ears, and from the European part of the mainland – Water Spaniels, trained to hunt small game. According to one version, these dogs became the progenitors of the English Setter.

In medieval England, hunting for game birds using the net was at its peak. Therefore, hunters were extremely interested in breeding dogs that could not only quickly follow the trail of the game, but also snuggle to the ground in order to give a person the opportunity to throw a net over it. Such dogs, who know how to do a stance, were called Setting dogs. They were slow-moving, rather heavy animals. When hunting with nets was replaced by gun hunting, the slow-moving setting dogs, afraid of shots, no longer suited the British. They needed fearless, frisky dogs with a good instinct, able not only to detect the game but also to frighten it off under a hunter’s shot. On this wave, the gradual development of the optimal hunting dog began. Setting dogs were crossed with Pointers, Hounds, Retrievers, and Poodles. As a result, light, fast, gun-hunting dogs, which received the name Setters, were not afraid of shots.

At first, there was no clear division into separate breeds. Dogs were distinguished only by the name of the kennel from which they came. The division into English, Irish and Scottish Setters appeared later. The British gave their preference to the dogs most adapted for hunting in swampy areas. These dogs were distinguished by a large chest volume, which allowed them to swim well, and a smooth, so-called feline move.

Nevertheless, the official creator of the English Setters, with exactly such external characteristics and hunting skills as they are known today, is Sir Edward Laverack, who in 1825 began to purposefully improve this dog breed. Applying the method of close crossing and selecting only the best qualities, for more than 50 years of breeding work, he developed the optimal type of English Setter. The specimens of the breed, bred by E. Laverac, have earned high appreciation and recognition among English hunters. That is why this breed is sometimes called “Laverack”.

On January 28, 1859, an exhibition of English Setters took place for the first time; two years later, the breed was officially recognized. 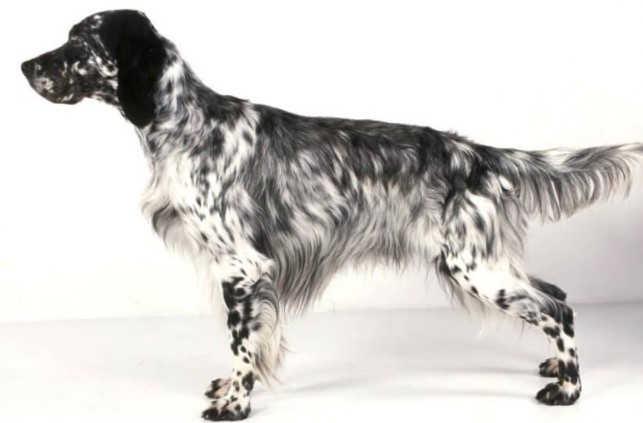 The English Setter is a medium-sized dog. Its lightweight combined with endurance and strength is suitable for both fast short runs and long runs. The reclining stance is considered the official norm for this breed.

Height from 53 to 64 cm, depending on gender. The recommended weight is from 20 to 30 kilograms. 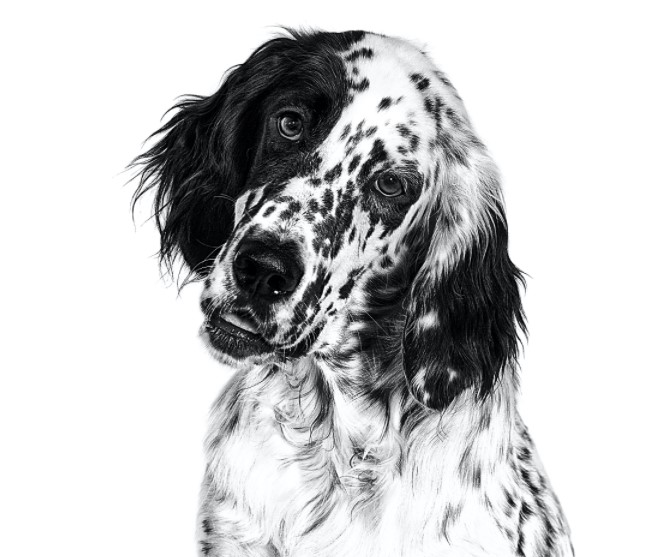 English Setters are extremely intelligent and sociable, and this is the main feature of their character. This breed is literally made for communication. The more people or other animals around the Setter, the better it feels. But he loves communication with the owner most of all. This dog will always be glad to you and your family. The Setter gets along well with children, can play with your child for hours. But still, if the child is too small, you should not leave him alone with the dog, because he can easily offend her. Wait until your child grows older and teach him to communicate with the Setter correctly, then you will always be calm for your child, and he will find a wonderful four-legged friend who is always ready to help.

The English Setter has a balanced psyche, soft and sensitive character, easily obeys commands, very obedient. Such a dog can be good company for you on any trips and travels. Thanks to his excellent character, there will be no problems traveling with him. It is completely unnecessary to wear a muzzle, as the Setter will not bite under any circumstances. This dog behaves equally calmly both in the car and in public transport. The only problem during a picnic maybe that the Setter wants to steal a small piece of tasty food, because, thanks to the hunter’s natural instinct, he captures smells excellent. This dog rarely barks and almost never shows aggression, it meets guests very friendly, can easily allow itself to be stroked, and may want to sit next to the guest on the sofa.

The Setter is very accommodating and peaceful, allowing other pets to play with him. Great for domestic cats and other dogs. Hunting interest can be shown only in relation to birds and rodents by virtue of a natural instinct. 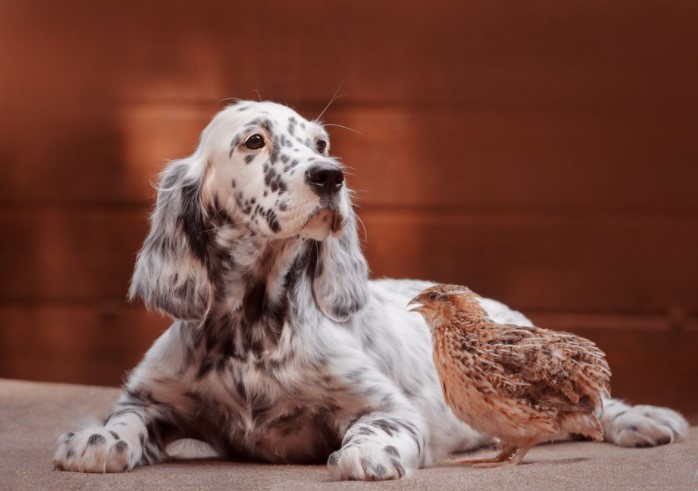 The English Setter has a long, silky, and shiny coat that requires careful grooming. To do this, purchase a special rubber glove brush at the pet store and use it to brush your wool daily. After such cleaning, it is enough to wipe the dog with a damp cloth. It is recommended to wash dogs with such hair no more than 2 times a month. To maintain a good structure of the coat, it is sometimes trimmed, especially in the neck (dewlap) and abdomen (frill). It is also possible to trim the hair on the ears and between the toes. These dogs shed infrequently, their fur does not leave marks on clothing and does not fly in the air, unlike the coat of shorter-haired dogs.

English Setters have long, drooping ears, so be sure to check them regularly for ticks and other parasites. It is necessary for time to carefully clean the auricles from excessive accumulations of earwax using special cotton swabs moistened with boric alcohol. Without proper ear care, dogs can develop serious complications in the form of otitis media. The first signs indicating the presence of otitis media cannot be confused with something else. The dog begins to constantly shake its head, tilt it towards the sore ear, unbearable itching and pain appear, the dog constantly tries to scratch the ear. In such cases, you should immediately contact your veterinarian, you should not self-medicate and start the disease, since in especially serious cases, injuries to the inner ear are possible up to the occurrence of complete deafness.

The health of the Setters is naturally strong. But there are a number of diseases that can be inherited and suddenly appear in an older puppy. Among these diseases are noted: atopy (dermatological disease), dysplasia of the hip joints (English Setters are most susceptible to this dangerous disease, unlike other dog breeds), congenital deafness, the impaired concentration of lysosomes (complications of this disease lead to blindness), ectopia (eversion of the eyelids), retinal atrophy and others. It is impossible to cure some hereditary diseases, many of them haunt the dog all his life. The only measure of protection against such diseases will be the correct choice of a puppy from conscientious breeders.

The life expectancy of English Setters with proper care and maintenance is 15 years. But usually, they live for 11-12 years, so much depends on properly selected physical activity, feeding, and a number of genetic factors. It should be noted that English Setters are prone to obesity and associated metabolic disorders, which can lead to premature aging. Therefore, these dogs should not be overfed and their diet should always be carefully monitored.