In the 19th century in England, the English Toy Terrier was bred specifically for catching rodents and rabbits.

The ancestors of the Toy Terrier are the Manchester Black and Tan Terrier (this breed no longer exists), the Italian Greyhound, and the Whippet.

They were the favorites of the English aristocrats, even Queen Victoria herself loved this breed.

Due to the fact that the breeders constantly reduced the size of the breed so that it could easily fit in the owner’s sleeve, there were big health problems and they almost disappeared, but after that, the experiments stopped and the health of the toy terriers came to the fore. 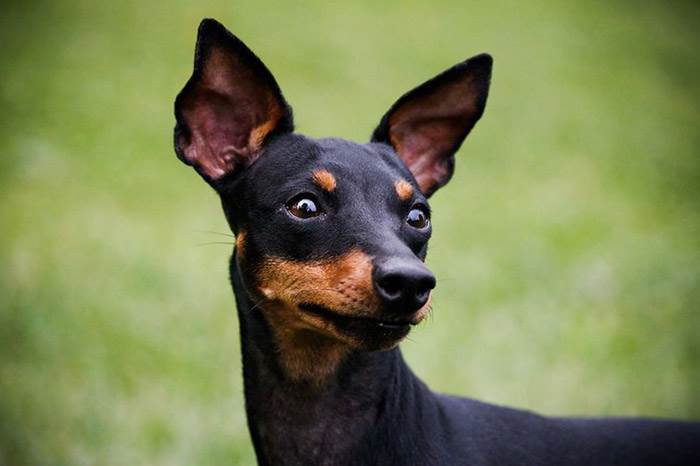 In 1962, the English Toy Terrier breed was officially recognized in England, and in the USA it is called the Manchester Toy Terrier. In our country, she is almost unknown.

Long and narrow muzzle, erect ears, dark almond-shaped eyes, thick, short, and shiny coat. It grows up to 25-31 cm at the withers, weighs from two to three and a half kilograms.

To maintain the gloss of the coat, brush or use a special gloss glove.

The color is strictly black and tan, with clear boundaries between the main black and tan. The markings of the English Toy Terrier are located on the face, forelegs, and throat.

The English Toy Terrier is an affectionate, charming, good-natured pet. He loves to play and cannot be motionless for a long time.

Toy terriers have practically no health problems. It has no peculiar smell and is very clean.

English toy terriers do not like walking on a leash, often let him off the leash so that he runs and jumps to his heart’s content. If you get caught in the rain, dry your pet and wrap it in a towel after a walk. In the cold, buy a warm outfit, and in the heat try to avoid the sun so that the baby does not get sunstroke.

English toy terriers are very attached to the owner and do not like loneliness. Reciprocate his love for him. He is very careful with strangers and will be suspicious until strangers earn his trust.