The European Shorthair (EKSH) breed has evolved over the last thousand years.

She is believed to be descended from Abyssinian cats. Time will do its job, and today we see yard cats familiar to our eyes, affectionate and intelligent, tireless hunters for mice and rats, hardy and freedom-loving.

On the forehead of animals of this breed, the letter M is clearly visible, as a sign of the caste of the European shorthaired. 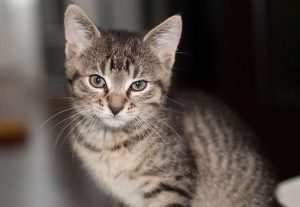 The European shorthair cat is a truly amazing pet, endowed with specific features that distinguish it from other representatives of the feline family.

First of all, this is a hunter, whose grace knows no boundaries. At first glance, it looks very much like an ordinary domestic cat, as its prototype is the European “domestic cat”.

The second name of the European Shorthair cat breed is the Celtic cat, but for some reason, it didn’t catch on.

The short-haired European (Celtic) cat appeared as a result of the purposeful selection work of felinologists from the northern countries of Europe – Sweden, Norway, and Denmark.

The goal was to create a robust shorthaired cat with a round muzzle. Sometimes cats were crossed with Persian longhair cats to speed up the process of uniformity in appearance.

This breed was bred in Northern Europe, Scandinavia, and the UK.

There was one significant difference: Scandinavian breeders denied crossbreeding between Persian Longhair cats and other breeds because they wanted to keep the breed as pure as possible. They only bred domestic cats that matched the desired type. Scandinavian breeders have named their breed the European Shorthair cat.

In other parts of Europe, with the exception of Great Britain, cats were bred, called the European Shorthair, but these cats carried the same genes and had the same pedigree as the British Shorthair cat from Great Britain, that is, genes. Persian long-haired cats were present …

At international shows, European Shorthair cats from all European countries stood next to each other, and it became obvious that Scandinavian cats look different. The same breed name for two different types of cats was very confusing.

Subsequently (in the 1980s) Scandinavian breeders approached FIFe with an official request to split their breed.

Since 1982, only Scandinavian-type cats have been called European Shorthair cats, and they have their own breed standard.

The European Shorthair cat is today a natural European breed with ancestors only from European domestic cats.

The breed is bred mainly in the Scandinavian countries, and especially in Finland, it is one of the most popular shorthaired breeds.

Animals of this breed are distinguished by a massive and rather strong body of rather a large size, not too compact, but at the same time very flexible and plastic.

The tail is moderately fluffy, slightly wide at the very base, and ends with a tapering rounded tip, which worthily completes the whole image of a beautiful representative of the cat breed.

The external structure has a number of the following features:

The rib cage is quite wide, the neck is just as muscular and strong, of medium length.
The limbs are powerful and strong, in proportion to the body, tapering to the bottom and ending in round legs.
The head is oblong, conical in shape. The protruding cheeks are considered a worthy decoration.
Movable, high-set ears of medium size with rounded neat tips. Some have original tassels that adorn the cat’s face.
Large and round eyes express keen intelligence and understanding. Their color is in perfect harmony with the shade of the coat.
The coat of pets is soft, very thick, gives a  natural shine, short and thick.

They are friendly and outgoing, but sometimes suspicious of strangers. They love human interaction and are extremely fond of “their” people.

They demonstrate their dedication to their owners, for example by welcoming them when they get home from work, helping them with their daily activities, and going to bed with them.

European shorthair cats are very adaptable. They get along well with other cats and other pets.