The Exmoor pony is the oldest British pony, and one of the oldest horse breeds in the world. The breed originated in the British Isles and usually lives in a semi-wild state in the Exmoor moorlands in the counties of Devon and Somerset in the southwest of England.

According to excavations, in southwestern Britain, horses were used to transport goods as early as 400 BC, and Roman ornaments have images of Exmoor ponies. Comparisons of this pony with the cave paintings of wild horses in France and Spain, as well as its similarity to tarpan, show that it may be a direct descendant of wild horses.

The Doomsday Book mentions Exmoor ponies in 1086. The next written reference is from 1818, when Sir Richard Ackland, the last caretaker of the royal forest at Exmoor, transported 400 individuals to his land in Winsford. This herd became known as the “anchor” herd, and a small number of pony descendants from this herd still live in Winsford. The rest of the ponies were sold out along with the land, and some remained to live in Exmoor. 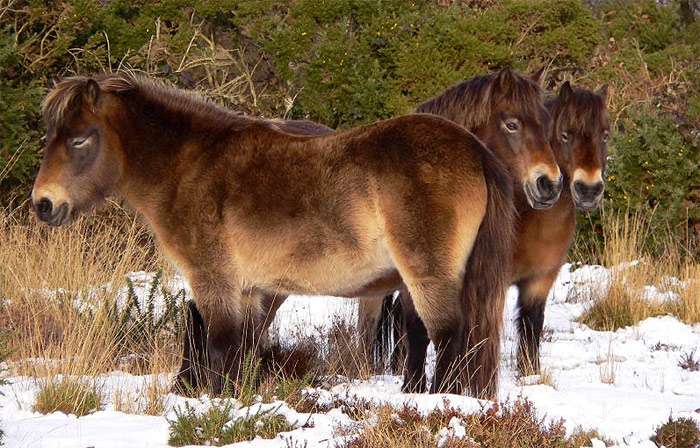 The remoteness of these ponies’ habitat meant that it was very slightly influenced by the blood of other horses. The harsh life in the heather thickets made this pony unusually hardy, not suffering from ordinary equine diseases, and capable of carrying an adult.

In the past, Exmoor ponies worked in mines, transported various goods, and helped local farmers manage their livestock in the pastures. The Exmoor ponies’ endurance allows them to be used in limited grazing, so they help maintain balance in wastelands and calcareous meadows.

In order to support and develop the breed, the Exmoor Pony Society was founded in 1921. It carefully regulates the number of animals in the herd. Only 50 Exmoor ponies survived the Second World War, of which 6 were foals. After the war, the population was supported by enthusiasts, and since 1981 their increased public activity has caused an increase in interest in the breed. The first Exmoor ponies to travel to North America were imported to Canada in the 1950s.

Horses are usually kept in separate stalls in the stable. The stall size must be at least 3x3m. The animal needs to be provided with walking for several hours a day, as well as communication with other horses.

It is best to choose wooden stables, but there are also good ones made of brick. The height of the curtain is 3 m. There must be windows in every stall and good ventilation. Make sure that there are no drafts in the stable that could make the horse sick. There should be walking pens nearby.

In stalls, straw, sawdust, peat are used as bedding. It changes daily. You should regularly check the condition of your horse’s hooves and use the services of a blacksmith.

Feeding methods for a horse are very dependent on the work it is doing and the degree of stress, as well as, of course, the total weight and individual characteristics. The menu is also different. The main diet of the average horse includes hay and oats – as the main food, bran, carrots. Horses need salt, so watch out for that too. It is best to ensure that the animal has constant access to it by putting a lick briquette in a stall or levada. 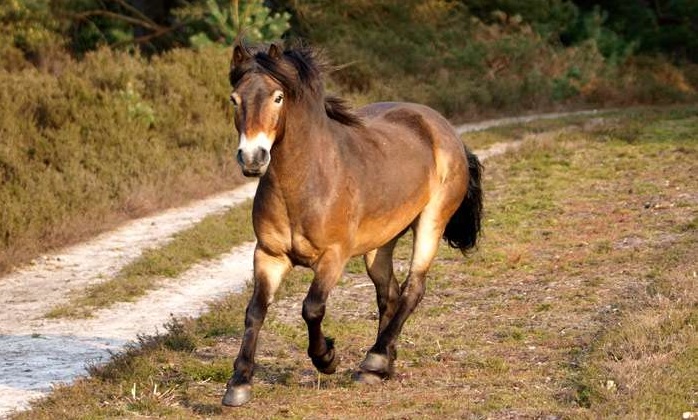 In the spring and summer, many stables practice grazing in the fields.

Vitamin and mineral supplements, as well as apples, fodder beets, and watermelons as a treat and also vitamins, will be a useful addition to the diet.

Horses can either be fed water through automatic drinkers or given in buckets before each feed. However, in no case should the drinking process be left uncontrolled, since a horse that is hot after work can harm its health by drinking water. First, she needs to cool down, no matter how much she wants to drink.

Only healthy animals are allowed for breeding, without behavioral problems. It is recommended to pair so that the mare is larger than the stallion.

Individuals not younger than 3 years old are allowed for breeding when the horses’ organism is formed.

Mating can take place both naturally (by hand, herd, or brewing method), and artificially. In the first case, the stallion is led to the mare (s).

The best time is from mid-March to July for the foal to hatch the next spring or summer when there are enough grass and warmth. It is possible to determine whether a mare is ready for mating by her special posture (widely spaced and slightly bent hind legs, a raised tail, and a lowered head), frequent urination and mucus management, as well as “blinking”.

For the successful completion of the mating, the stallion is on the mare until the sperm is completely ejected. After mounting, the mare must be driven for 10 minutes.

Exmoor ponies are well adapted to harsh environments. They are short, stocky, with a thick coat that protects them from the cold. They have deep sinuses in which cold air is heated. The structure of the jaw in this breed differs from others and also testifies in favor of the antiquity of these horses. They have an extra molar that other breeds lack.

These horses are hardy, healthy, and friendly. Due to their powerful physique, they were well suited for working in mines. Today they are used for both riding and harnessing. Moreover, in 2012 the pony of this breed won equestrian agility, which indicates the excellent trainability and obedience of this breed.

They are unpretentious in grooming, very balanced and calm, and with all their strong and compact body, they have very good racing abilities and jump well, so they can be an excellent choice for a child who wants to ride or just have a horse as a friend.