Most aquarium fish originate from warm tropical waters, so a comfortable temperature for them is 24-26 ° C. However, some fish species tolerate keeping well at lower temperatures – 15-20 ° C. Among the large fish, the most popular are Goldfish, and among the small species, of course, the beautiful and unpretentious fish is White Cloud Mountain Minnow. 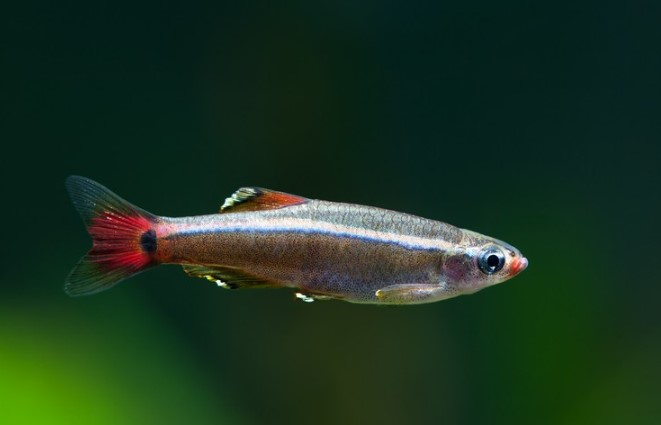 White Cloud Mountain Minnow (Tanichthys Albonubes) is a small fish from the carp family.
This small cold-water fish has spread all over the world from China. Currently, several color variations have been developed, as well as a form with veil fins. In China, it is sometimes kept in decorative ponds.
Due to its hardiness and small size, this fish can be safely recommended to novice aquarists. 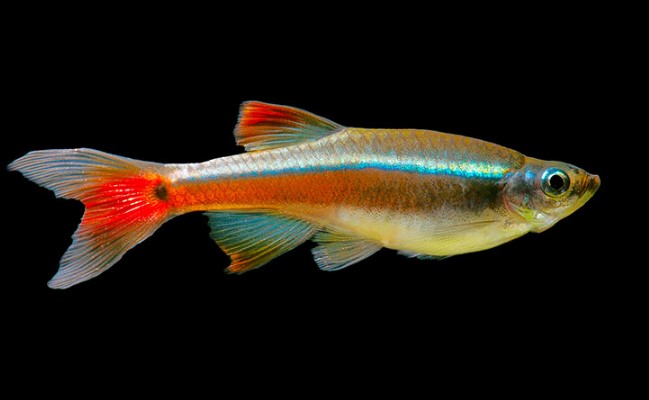 In the aquarium, the size of White Cloud Mountain Minnow does not exceed 4 cm. The body is elongated, bronze-brown in color. On the sides from head to tail, there is a bright luminous strip, reminiscent of that of Neons. The upper mouth is adapted for catching insects floating on the water surface; antennae are absent.
The anal and dorsal fins are in line. They are completely or partially colored bright red. The caudal fin has a similar color. There is a dark spot at the base of the tail. The gill fins are transparent, but often with a yellow sheen or black edging. Gender dimorphism is not pronounced, usually, males are slimmer than females and have a brighter outfit. 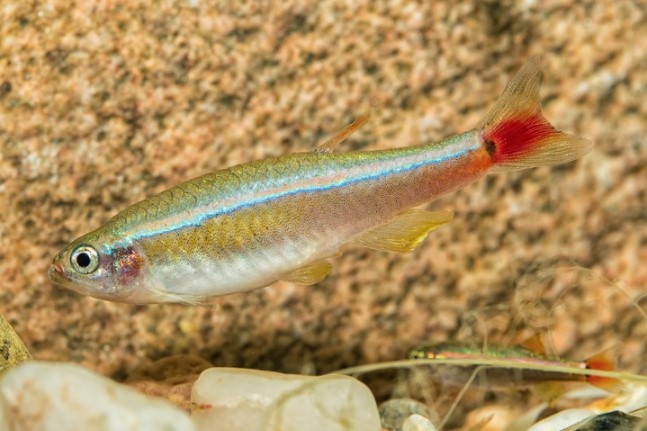 After the discovery of the fish in 1930, it was sold under various names: Chinese Zebrafish, False Neon, etc. But the original name of the fish sounds like White Cloud Mountain Minnow and is named after the mountain range located north of Guangzhou (China), near which and a previously unknown species of fish was first discovered.

The first who discovered this fish to the world is the leader of China’s youth pioneer movement – Tang. All this is reflected in the Latin name of the fish. “Tanichthys “means Tana fishes and “albonubes” means white clouds.

The first specimens came to Europe in 1938, and, thanks to their unpretentiousness, beautiful color, and luminous stripes on the sides of the body, won the hearts of aquarists. 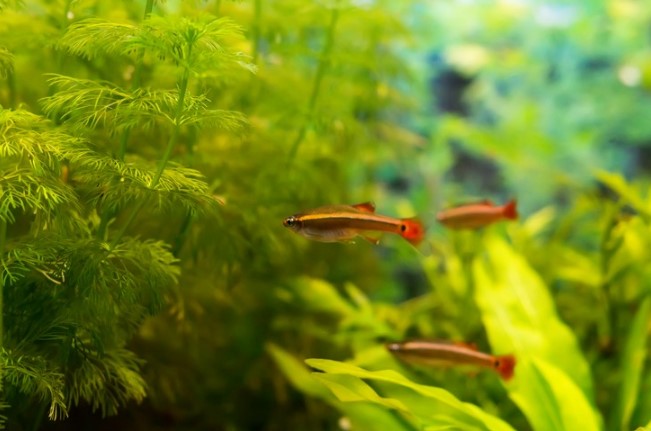 The historic homeland of White Cloud Mountain Minnow is southeast China. The fish can be found in small rivers and streams with a slow flow and rocky bottom. Usually, these fish do not sink below 60 cm from the water level but hide in thickets of dense coastal aquatic vegetation.

Unfortunately, significant changes in environmental conditions caused by human activities, as well as uncontrolled fishing, have led to the almost complete destruction of the natural populations of this fish. Since the 80s of the XX century, the fish was completely considered extinct. However, later it was possible to find several isolated populations in China and Vietnam. The government of these countries is taking measures to restore the number of fish. All fish for sale are now grown artificially on special fish farms. 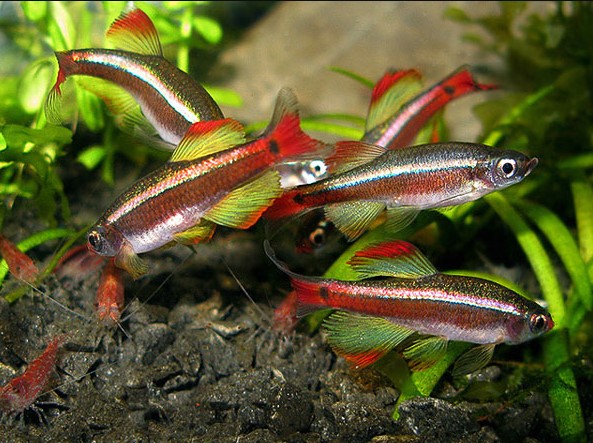 White Cloud Mountain Minnow is a relatively conservative species. Only a few variations have been bred by breeders, the most common of which are:

The conditions for keeping and breeding fish are absolutely identical. 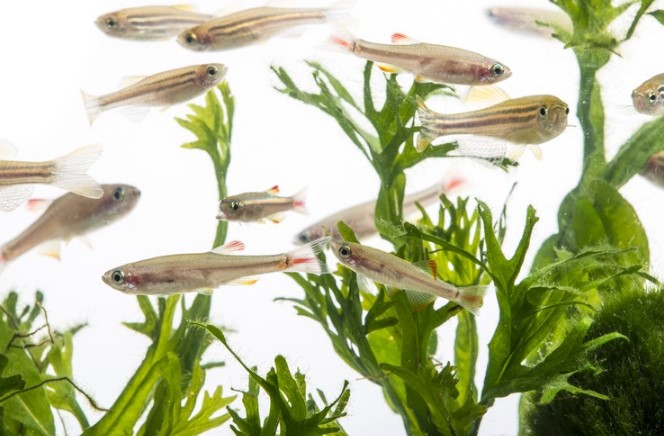 These are schooling fish, therefore, they must be kept in groups of at least 6-8 individuals. An aquarium of 30 liters or more is suitable for such a number of fish. When kept in a flock, the fish become less fearful, and the internal struggle for the attention of females leads to an increase in the color of the males. Coarse sand or small pebbles can be used as soil. A filter and a compressor must be installed in the aquarium to create the most comfortable environment. But the thermostat is no needed because White Cloud prefers to live in water with a temperature not higher than 22 ° C. It is noted that if the temperature in the aquarium does not rise above the 20 ° C mark, then the color of the fish becomes brighter. The lighting should be bright, under it flocks of White Clouds will play with bright colors.

These fish thrive best in aquariums with live plants. It is advisable to plant them along the walls of the aquarium, leaving more space for swimming. Commonly used are elodea, hornwort, ferns, and other small-leaved plants. Natural driftwood and rocks will look good in the aquarium.

Despite the high endurance of these fish, regular maintenance of the aquarium should not be neglected. Water changes and soil cleaning are required weekly. Mountain Minnows are sensitive to the copper content in their water, so medications that contain it must be used carefully. 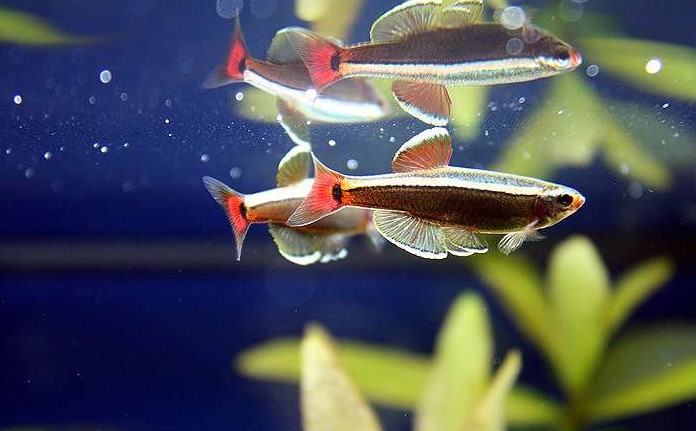 In nature, Mountain Minnows mainly feed on insects that fall into water bodies. Their small mouth is perfectly adapted to capture prey from the surface of the water. This must be taken into account when choosing food for your aquarium inhabitants. Among all the variety of food, it is better to give preference to complete dry food. Unlike live and frozen ones, they do not pose the threat of contaminating the aquarium with dangerous parasites and infections, they are balanced in nutrients and vitamins, they are convenient to store and use. The most suitable form of food for Mountain Minnows is flakes and chips, because they float on the surface of the water for a long time, gradually sinking into the water. 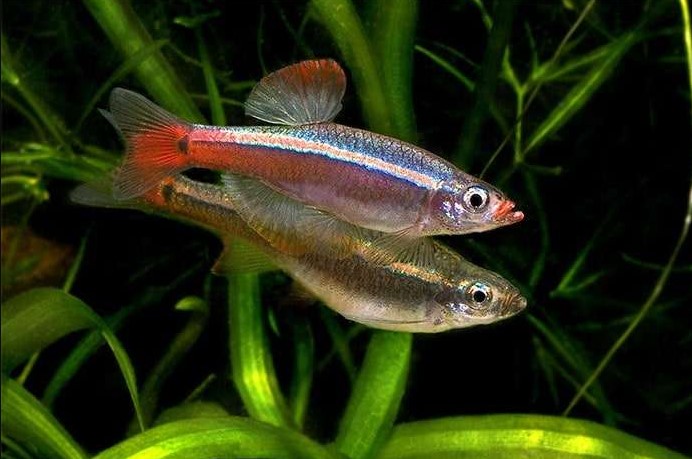 Breeding Mountain Minnows at home is not difficult. Gender dimorphism is not pronounced, but males have a brighter color and slender body, while females have a rounded abdomen. Spawning is possible throughout the year.

If you are the owner of a species aquarium, which contains only these fish, then you can observe reproduction right in it, because the fish calmly relate to their own eggs and fry.

If the aquarium is shared, then spawning is best done in a separate container. To do this, you need an aquarium of 30-40 liters, with aeration and filtration without a strong current. At the bottom, you can lay a separator mesh or lay a carpet of moss.

Before spawning, it is recommended that producers are planted for a week and fed with high-protein feed, after which they are placed in a spawning aquarium. For 4-5 females, you need to put a pair of the brightest males.
Spawning is stimulated by raising the temperature to 20-22 ° C and adding soft water. It is desirable to brightly illuminate the aquarium. Spawning lasts several days, during which time females lay up to 300 eggs. After spawning, the producers are planted.
The fry appears in 36-48 hours and begins to feed on their own 3-4 days after hatching.