In its color, the fire barb is very similar to goldfish, however, the latter is much inferior to this species in the activity. The fish are perfect for those who like to observe the moving bright inhabitants in the aquarium.

The fire barb (Puntius conchonius), also known as the red or pink barb, is a popular aquarium fish from the carp family. It is one of the most beautiful barbs. Its scales are cast in gold, so the eternally scurrying flock of these fish looks extremely impressive. Add to that a peaceful nature and good endurance and you have the perfect fish for aquarists of all skill levels.

The species was first described in 1822 by the Scottish scientist Francis Hamilton, but it got into amateur aquariums only at the beginning of the 20th century.

Unlike many barbs, this species lives in the relatively cool water of 18-22 ° C. The color of individuals may vary depending on the geographic region in which the fish lives. For example, the fishes that live in West Bengal are considered the brightest and most attractive. At present, fire barbs are no longer caught in nature, but bred on special farms, fish spawn quite simply. Through the efforts of breeders, several variations have been obtained, differing in color intensity and fins length.

It is known that the fire barb can interbreed with closely related species: the alo fin barb, black and scarlet.

In the fire barb, the oval body, elongated in length and flattened from the sides, is adapted for rapid swimming. The head is pointed, the antennae are absent. In aquariums, the size usually does not exceed 7 cm, although natural individuals can grow up to 10-15 cm. 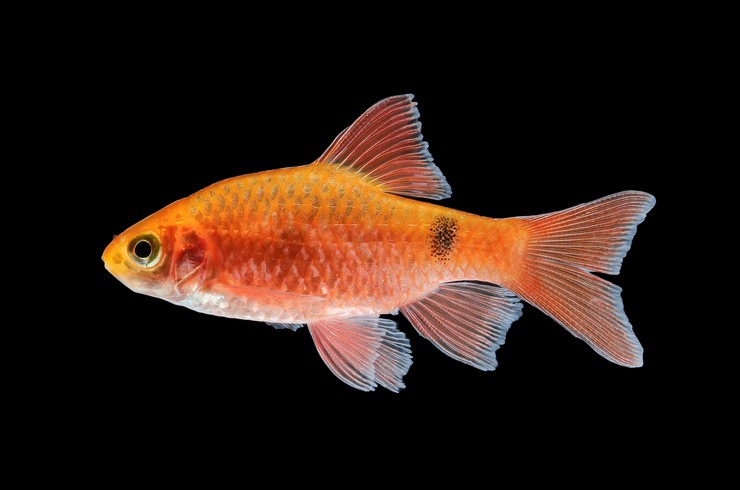 Body-color ranges from bright orange to pale pink, depending on the variety. Males have a greenish back. The fins are red, often with a black border. There is a dark spot at the base of the forked caudal fin. There is a veiled form with highly developed fins.

The lifespan of a fire barb in an aquarium is about 5 years. 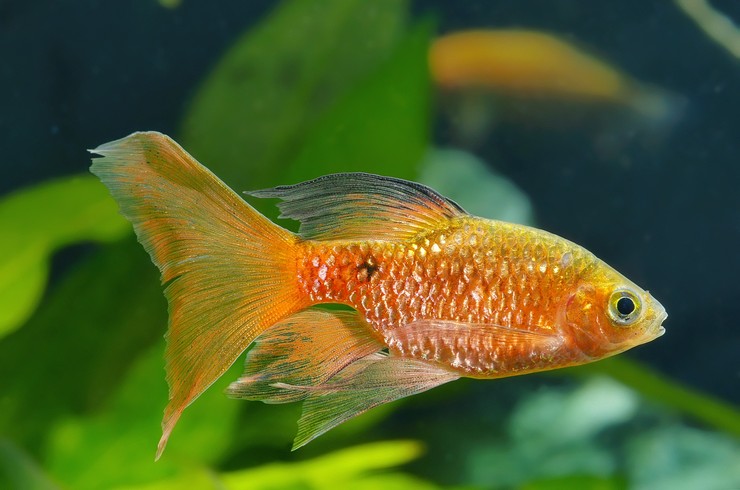 The fire Barbus lives in a fairly wide area in the east and north-east of India. Also, the fish can be found in Pakistan, Bangladesh, Nepal, Afghanistan. The Barbus has taken root well in some countries, where it was artificially introduced – Singapore, Australia, Mexico, Puerto Rico, and Colombia.

Habitat conditions vary greatly in different geographic regions. The fire Barbus can be found both in slowly flowing and almost stagnant bodies of water and in fast streams and tributaries of rivers.

The fire Barbus is a mobile schooling fish, this must be taken into account when planning an aquarium. It is best if the number of individuals in the group is at least 8 pieces. It was noted that when kept outside the school, the level of aggression even in such peaceful fish increases markedly.

For a flock of barbs, an aquarium with a volume of 80 liters or more is well suited. There should be a lid on it because the overclocked barbs easily jump to the floor. They swim in all layers of water. 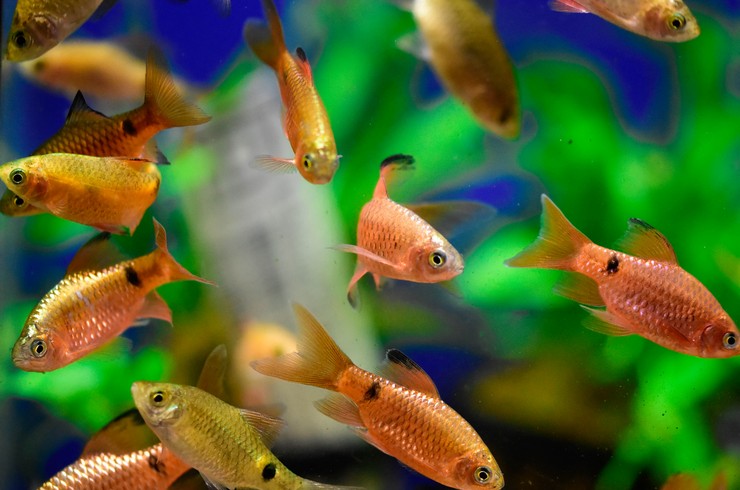 They do not have special requirements for the design, but they look best with natural decorations. Sand or dark fine soil can be placed on the bottom. It is recommended to install several driftwood and stones and plant dense thickets of aquarium plants along the walls. You can use any species, the fish are practically not interested in green spaces. Don’t forget to leave a place to swim for this active species. The fiery barb loves dim light, so it will not be superfluous to launch floating plants (pistia, riccia) onto the surface of the water. 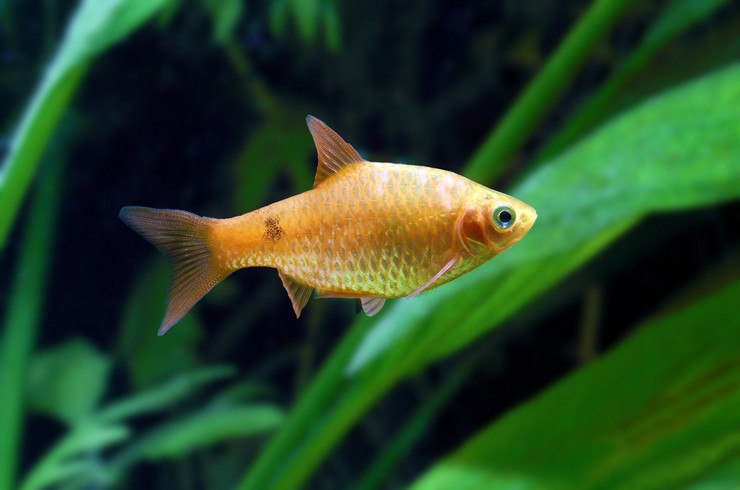 The aquarium must be equipped with a filter. Barbs like the moderate current, which in turn stimulates the bright coloration of the males. A compressor is installed to enrich the water with oxygen, but a thermostat may not be needed, because the fish prefer a water temperature of about 20 ° C. The issue of water cooling in summer is much more common.

Do not forget about the weekly water change – 30% of the volume of the aquarium.

The fire barb is a peaceful, but very active fish. It is important to remember: in a general aquarium, they must be kept in a flock, while barbs will not pay attention to other species.

As neighbors, fish with a similar temperament is best suited: other types of barbs, mollies, iris, dwarf cichlids. Quietly, the fish belong to the catfish ancistrus, corridors, torakatums.

It is not recommended to keep fire barbs with fish that have long fins, barbs can bite them. Therefore, it is better not to keep them in the same aquarium with gouras, lalius, cockerels, goldfish.

Large predatory cichlids (akars, astronomies) pose a danger to barbs, therefore it is also impossible to combine such fish.

Invertebrates from the basis of fish nutrition in nature. The fire barb will happily feast on insect larvae, worms, and mollusks. The diet includes tender branches of aquatic plants.

When keeping in home aquariums, it is recommended to opt for quality dry food. Unlike live or frozen, they contain essential nutrients and vitamins and are completely safe for fish. The convenience of storage is also an important plus. The following dry food is perfect for feeding the fire Barbus:

It is necessary to feed barbs several times a day with a portion of feed, which will be eaten in a few minutes. Do not forget that fish are prone to overeating, so once a week give them a “fasting day”.