The inquisitive minds of Asian breeders make them create new and unusual aquarium fish every year. Attempts at interspecific crossing do not stop, but, unfortunately, in most cases forms with a pale color, an ugly outline of the body, and, as a rule, sterile is obtained. The Flower Horn is a pleasant exception to this rule, as the result of hybridization is an unusual and attractive fish that can easily multiply in an aquarium. In this article, we will talk about how to properly contain this stunning giant.

Flower Horn, or Flower Horn (Flower Horn) – an interspecific hybrid of several South American cichlids, obtained by breeders from Malaysia. The first attempts at crossbreeding began in 1993, and already five years later, the first flower Horns were presented to the world.

What is this fish interesting for? The “calling card” of the flower horn is a highly developed growth on the head. It is composed primarily of adipose tissue. The inhabitants of Asia are very fond of fish with “caps” because they are a symbol of the god of luck and longevity. Flower Horns, along with Arowana, are the “favorites” of the followers of Feng Shui teachings. An aquarium with these fish, in their opinion, will undoubtedly bring prosperity to its owner.

Another feature for which this fish is loved is dark spots on the body, which are very reminiscent of hieroglyphs. Individuals with a “lucky” tag can cost a lot of money, but they always find their buyer.

The Flower Horn is a real show fish. Individuals living in a large species aquarium are guaranteed to attract the attention of others.

Oddly enough, the flower horns are quite unpretentious in care, although it is not recommended for beginners to keep these fish, it is better to start with other light cichlids.

Flower Horns are not shy fish. During manipulations in the aquarium, they can attack and noticeably snatch. But they quickly get used to the owner, let themselves be stroked and fed. 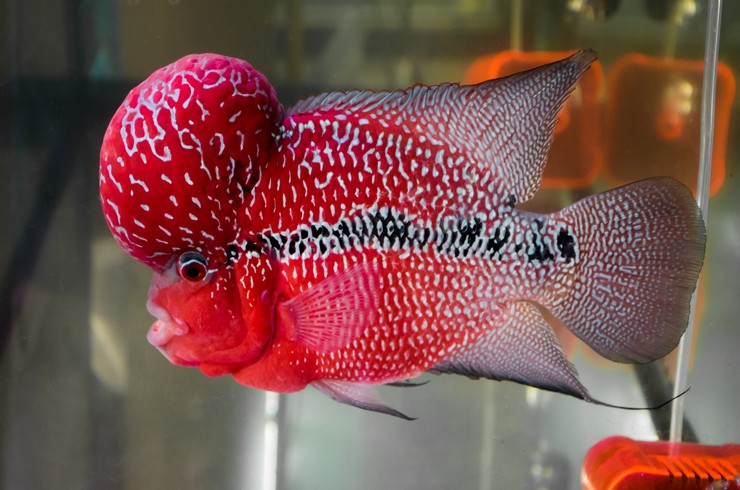 It is worth noting that there are also critics of artificially obtained fish, including the flower horn. They consider it inhumane to breed individuals with various anatomical deviations, to maintain and develop them in a number of generations. For example, the “cap” is sometimes enlarged with the help of chemical compounds.

Environmentalists are also sounding the alarm. And this is due to the fact that, in the process of selection, culled individuals are often sent to natural reservoirs, where the flowering hornets can become a serious threat to the local ichthyofauna. In some countries, such as Australia, the import of flower horns is prohibited.

Flower Horns are very large cichlids that, under suitable conditions, can grow up to 30-40 cm. The body is oval, very dense. There is a large fatty lump on the head, which sometimes protrudes beyond the head.

On sale, you can find flower horns of various colors: red, pink, gold, gray. On the general background of the body, there are shiny spots of irregular shape. There are hardly two identical representatives of these cichlids in the world. 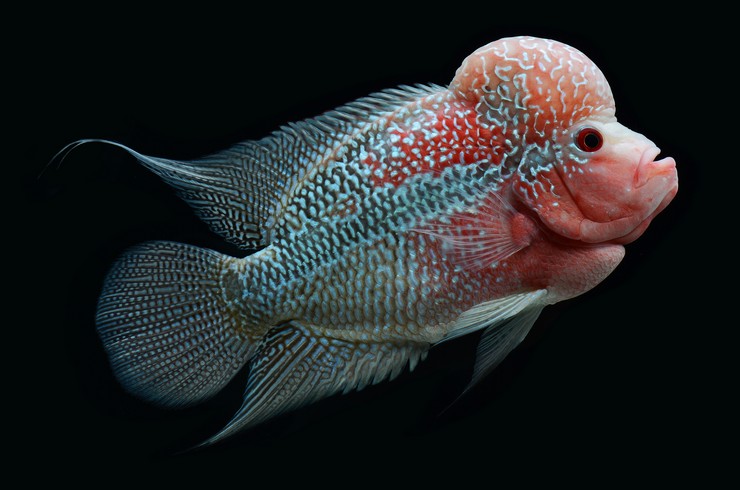 The flower horns have an interesting feature: young individuals can change color during the growth process. This means that beautiful fry may not retain their juvenile color when they grow up. To avoid such surprises, it is recommended to purchase already adult fish, the body color of which has already been fixed. But if you look from the other side, there is always a chance to get an individual with some rare color from the fry, so you can take a chance.

The mouth is large with fleshy lips, always ajar.

The Flower Horn is an artificial fish that does not occur in the wild (with the exception of individuals that were accidentally or deliberately released by the aquarists themselves). The progenitors of the hybrid are the famous cichlids of South America.

At present, a wide variety of forms have been obtained, which, depending on a number of characteristics (cone size, color, etc.), are classified into several groups. The most popular of these are KamFa, Malau, Zhen Zhu, and Thai Silk.

Every fan of flower horns should understand that a fish needs a spacious aquarium due to its size. It is best if one individual will have at least 150 liters of water. But the real fish will reveal its beauty only in a huge species aquarium of 800-1000 liters.

It is recommended to keep these cichlids in pairs, while it is imperative to monitor the behavior of the male. For various reasons, he can attack the female and harm her. If you have a suitable aquarium and want to keep several pairs of flower horns, then be sure to zone the area and install a large number of hiding places to minimize conflicts between fish. 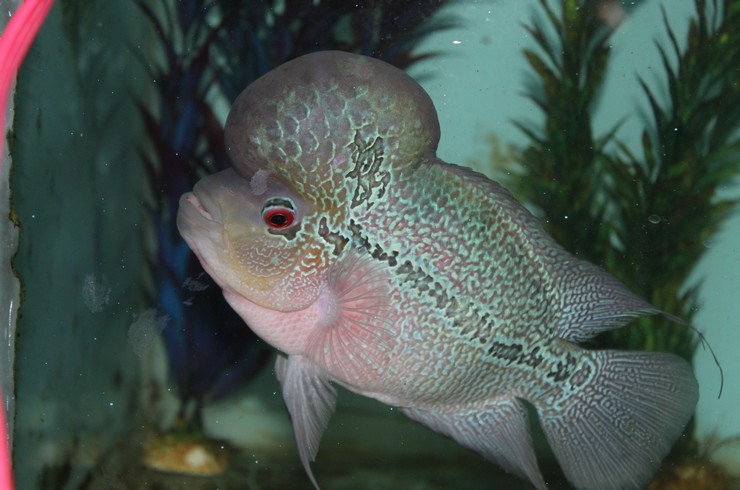 Flower Horns are incompatible with living plants. Almost any greenery will be eaten or dug up. Therefore, it is advisable to select a larger soil and make a larger layer, because the flowers love to dig at the bottom. For the same reason, any decorations must be firmly fixed and positioned so that if they fall, they cannot damage the walls of the aquarium. Most often, compositions with stones and snags are used.