Often the main goal of divers is to encounter something large underwater. Moreover, the more this “large”, the better. In the tropics, stingrays and sharks become such an attraction. But there are other interesting marine animals as well. For example, the inhabitant of the Sea of Japan is Doflein’s octopus. Divers can watch this most interesting animal for up to half an hour if you know the place.

You can meet this octopus while diving at the stone heaps. It is there that this owner of the local land lives. Given its size and intelligence, it is hard to believe that it is a close relative of the scallop or snail. It is in these territories that his home is located, he patrols them in search of food and communication. 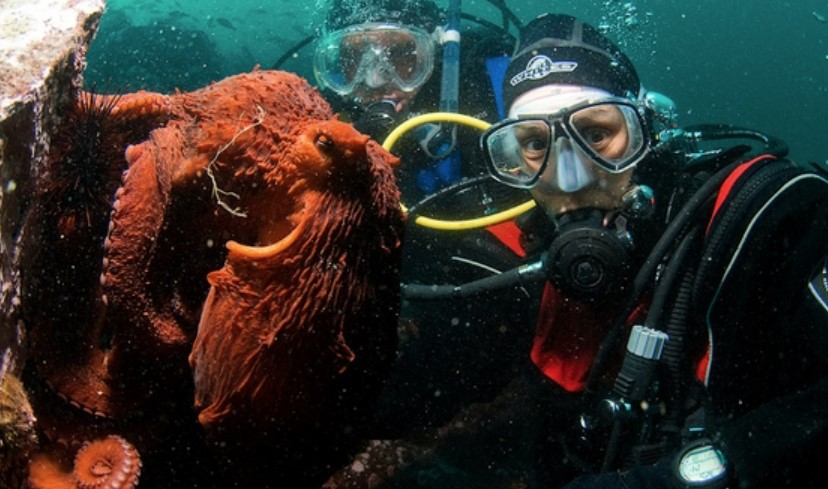 The most interesting thing in such meetings is the possibility of full-fledged communication. The octopus also perceives a person as an equal, as an object for study, he shows a very definite interest in divers. The octopus can be stroked, and he will also be happy to talk to you. You can take a picture for memory, you can dig out a shell and give him to earn noticeable gratitude.

There are several dozen species of octopuses in the world. Among them is Doflein’s stocky octopus. It is also called the giant Pacific octopus with a size of about a meter and a weight of about 20 kg. There are also individuals that are human-sized and weigh more than 40 kg. And among the record holders, the length reached 4-5 meters in length, and the weight was more than 150 kg.

Like all cephalopods, in the octopus, the front part is an oblong head with an internal cavity – a bag-like mantle in which the internal organs are located. The back part is represented by 8 muscular tentacles, which simultaneously act as arms and legs.

Eight tentacle legs are connected by a thin membrane to each other. Each bottom has 200 suction cups arranged in two rows. In this case, the “combat” suckers, the largest, are located closer to the center, and to the ends of the tentacles, the suckers become much smaller.

Most often, the octopus sits at home during the day, where it can be easier to catch than on a walk. The house is like a hole under a stone. First, the octopus chooses the desired stone on the dump, then chooses the soil from under it, and settles into the hole. Such a dwelling is easy to find over the mountains of waste. The owner digs up the shells, drags them home, and throws out the shutters next to the burrow after eating.

When the octopus is calm, he sits in the hole leaning out a little, and looks at the world around him. During sleep, the octopus does not close its eyes, it only narrows the pupils greatly. If he senses danger, then he immediately hides in a hole deeper. With the correct behavior of the diver, the octopus takes an active interest, he studies the guest. And first, he examines, and then feels.

With careful groping, the octopus examines all objects. The inner surface of the octopus tentacles, and especially the suckers, is covered with thousands of special sensitive cells. This is how he recognizes the edibility of an object and its taste. The octopus will attach the suction cup better and faster to a flat and solid surface. For example, he is more likely to stick on his bare hand than a neoprene diving glove.

When two octopuses meet, they begin to pull each other by the tentacles, measure their strength, in the manner of arm wrestling. If you do not make sudden movements, then I will let the octopus cling to itself, you will practically force the octopus to come out on its own, to see who is pulling it so persistently but delicately.

Outside the burrow, the octopus can either walk on solid ground due to its tentacles. Or swim in the water column using your own jet engine.

The robe gives the octopus a comfortable jet engine-based remedy. For its work, the octopus sucks water in the head part into the gap under the mantle. Then he pushes it through a special nozzle, due to which jet propulsion is created and a speed of 5-10 km / h develops. Moreover, this nozzle is controlled and can be turned in any direction. That is why the octopus is so agile and nimble. The same jet stream is used to wash out sand from under-stones when building a burrow. Even for military purposes – he practically “spits” a water stream from the hole, being not in the mood.

In case of danger or unpleasant attention, the octopus releases a jet of black liquid, which creates a false target, under the cover of which it hides. Young octopuses are especially fond of this method.

Its mouth is located in the center between the tentacles. The suction cups themselves can hardly do any harm. But the jaws of the octopus are very strong and can even inflict a small wound. The mouth of an octopus is often called a beak because the two jaws resemble the beak of a parrot with a reverse bite. You can even stick your bare hand right into the center, after a while the octopus can scrape the skin and start rubbing it with a grater tongue. It is this mouth mechanism that is the largest solid part of the octopus, so the mollusk can easily crawl into an opening that is 12 times smaller on average, the only condition is that the head just crawls through. 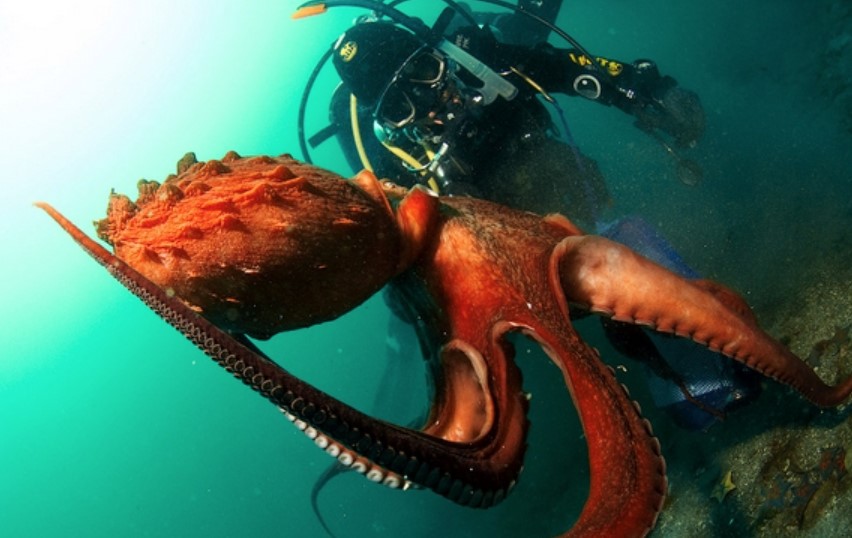 The octopus is well suited for camouflage. Its chromatophores can almost instantly (about 1 second) change color in the body.

The octopus can get rid of annoying visitors in different ways. The main scheme of behavior is to try to disguise and not only merge in color, but also to imitate the relief of the environment. Its skin is quite soft, while rough and bumpy. So in this photo, there is an octopus, you just need to find it.

Each octopus is unique in its own way, with its own character, mood. In addition, these animals have excellent memories. They distinguish and remember divers. And if the diver behaves correctly, then when they meet, the octopus will come out of its hole by itself, feel the guest, demonstrating the joy of the meeting.