Among the cichlids living in Lake Malawi, there are a lot of representatives that have a blue or light blue color. If you are a fan of such shades, then you will certainly be delighted with the content of cornflower blue haplochromis, the very name of which already indicates the unusual and bright color of the fish. Let’s take a closer look at how to create comfortable conditions for this cichlid in a home aquarium.

Cornflower haplochromis or Jackson’s haplochromis (Sciaenochromis fryer) is a freshwater ray-finned fish from the Tsikhlov family. It is endemic to the African lake Malawi, which is famous for its cichlid species diversity. The first specimens of haplochromis were described back in 1926. For one reason or another, the fish changed its specific name several times, and later it was generally moved from the genus Haplochromis, although the historical name is still the most popular.

Males of haplochromis have an outstanding bright blue or light blue coloration. This is a relatively calm cichlid, although territoriality is also not alien to it. 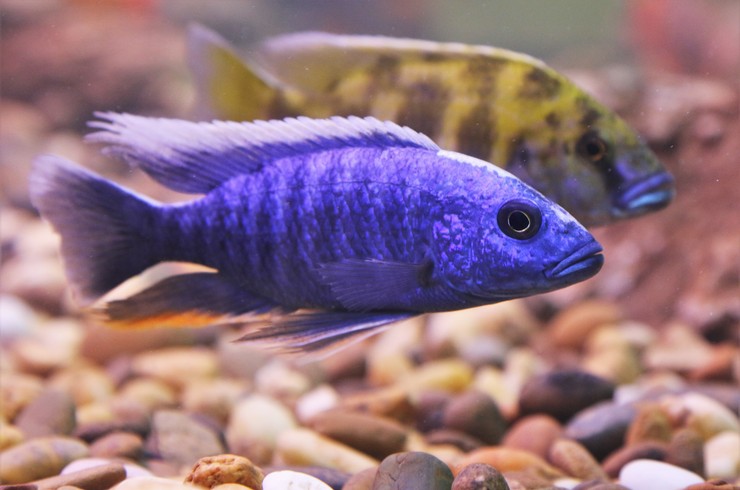 Haplochromis cornflower has a noticeably elongated body, which immediately betrays a hunter in it. The head has large eyes and a large mouth with fleshy lips. The caudal fin is trapezoidal. The dorsal fin is well developed, which runs from the gill line to the very tail and is sharpened at the end. Male haplochromis Jackson can grow up to 20 cm, females usually do not exceed 15 cm.

The birthplace of cornflower haplochromis is the African lake Malawi (Nyasa). This reservoir is of tectonic origin; it was formed at the junction of lithospheric plates. Due to long-term isolation, the lake has become a major center for cichlid speciation.

Haplochromis Jackson is a widespread species; it lives at depths of 10-40 m in transition zones where areas with rocky and sandy bottom intersect. It is an ambush predator that waits for its prey, hiding among the stones.

Cornflower haplochromis should be kept in harems, where there will be 3-4 females for one male. Such a group will need 200-300 liters of water. It is allowed to plant two males in one aquarium only with significant volumes of the aquarium (from 400 liters). The number of females, in any case, should prevail. Only this will help to reduce intraspecific competition and will not lead to the death of a weaker male. 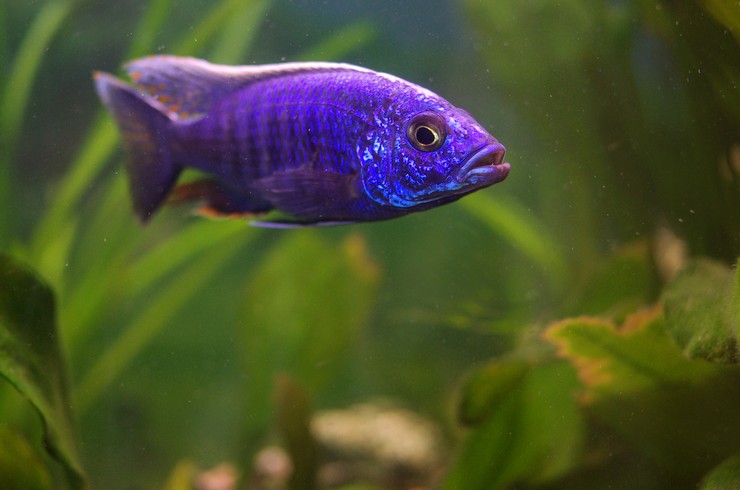 The aquarium must be equipped with a lid so that the fish do not accidentally end up on the floor of the room. Cornflower blue haplochromis look best in compositions reminiscent of the landscapes of Lake Malawi. It is advisable to use sand as a soil, on which firmly fixed piles of stones are installed, forming natural shelters. Planting live plants is in most cases impractical. Often haplochromis are used in compositions in the “pseudo-more” style. Natural corals used to build them increase the hardness of the water, which Malawian cichlids will like to taste. 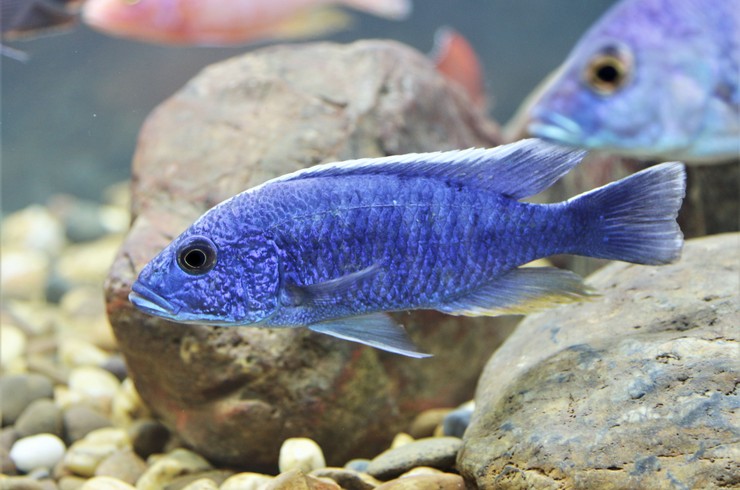 But the quality of water should be approached thoroughly. You will definitely need a powerful external filter and good aeration. Jackson’s haplochromis are thermophilic creatures, so take care of a thermostat of suitable power.

Once a week, a 20% water change in the aquarium is required. Never use water directly from the tap for a change: it may contain hazardous elements such as chlorine or heavy metals. To make it safe instantly, add Tetra AquaSafe conditioner to a bucket of fresh water and you can safely pour it into the aquarium without settling. It is important to remember that the water in Lake Malawi is highly mineralized, so make sure the hardness is at least 10 dGH.

Haplochromis cornflower has a rather livable character and is much calmer than many Malawian cichlids. However, he cannot be called completely docile, because he is a real predator who can easily eat any fish that can fit into his mouth. Therefore, Haplochromis Jackson should be kept only with proportionate cichlids. Representatives of the Mbuna group (melanochromis, pseudotrophies, labidochromis), blue dolphins, aulonocars are well suited. Although you need to be careful with the latter, because males of haplochromis are able to fertilize their eggs, and therefore, hybrid offspring can be obtained. As roommates, African synodontis catfish are suitable. 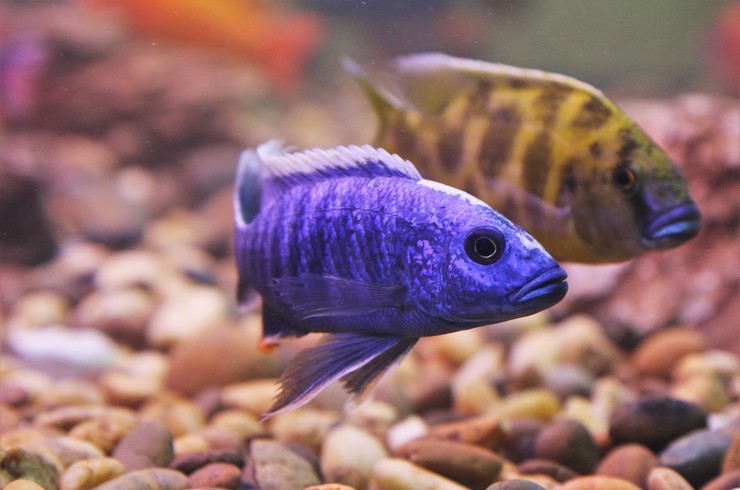 In nature, the cornflower blue haplochromis diet consists primarily of fry of other Malawian cichlids. At home, fish are excellent at switching to high-quality dry food with a high protein content, designed specifically for cichlids. Depending on the size and personal preference of the fish, you can opt for Tetra Cichlid XL Flakes, Tetra Cichlid Sticks, or Tetra Cichlid Crisps. Each of these feeds will fully provide the haplochromis with quality proteins and other nutrients. A special complex of vitamins will give you health and longevity.

It is best to feed the fish several times a day (young 3-4 times) in such a portion that will be completely eaten by the cichlids in a few minutes. Haplochromis are prone to overeating, so once a week you can arrange a fasting day.

Another indisputable advantage when keeping cornflower blue haplochromis is the ease of breeding this species at home. The fish have a highly developed parental instinct, which, however, is not at all uncommon for Malawian cichlids.

To distinguish a male from a female is quite simple: only males have a bright blue color, and they are larger in size. Females have modestly colored: their scales are silver, sometimes with a bluish tint. Fish can spawn at intervals of two months.

In nature, males build conical mounds of sand with a hole at the top as a nest, and in aquariums, they usually dig small holes under the stones. 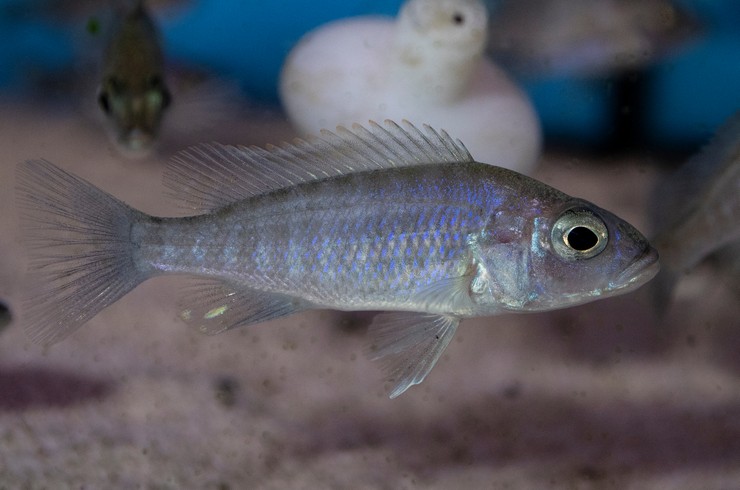 At this time, the female does not eat anything. You can distinguish it by its stretched mouth. During this period, you should not expose the fish to stress, otherwise, it may swallow or lose its eggs.

Incubation takes about 3 weeks, after which fully formed fry of fairly large size are born. If spawning took place in a separate container, the female should be returned to the general aquarium. As the haplochromis fry grows, they should be sorted to prevent cannibalism. At the age of about six months, it is already possible to determine the sex of the fry, and the fish reach sexual maturity when they reach 12 months.