Hippos are called one of the most dangerous animals in Africa. They are quite aggressive territorial creatures. And most importantly large – colossus weighing more than a ton.
But the South African farmer Marius Els managed to find a common language with the hippopotamus. Marius maintains himself on a farm with an area of 160 hectares, two dozen wild animals – giraffe, rhinos, antelope, buffalo. And six years ago, at the age of five months, he also had a Humphrey hippo. 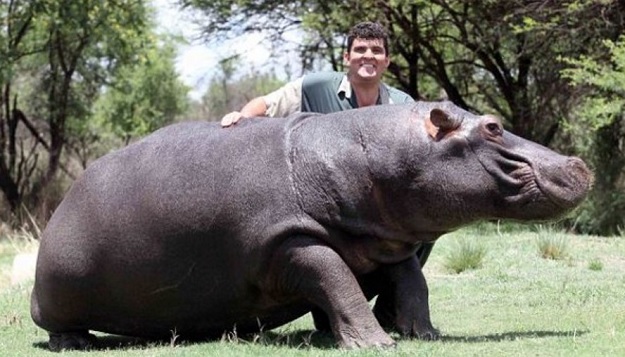 Els managed to tame the animal to such an extent that the hippopotamus moves freely around the farm. The farmer even built a dam and organized a lake of such a size that the pet could freely swim and dive in it. And along with Humphrey, the owner himself swims.

Before riding the pet, the farmer treats him to apples. After that, Humphrey easily allows himself to sit on himself and transports the owner across the lake. True, sometimes he gets tired of it, and he throws Marius off, and he easily plunges into the water.

There are certain difficulties on the farm now. Humphrey is already quite an adult male and would be ready to meet some pretty female hippopotamus. But the owner is afraid to let him go free.

Because there are many wild males in the area who have long been hardened in territorial wars. And it will be difficult for home Humphrey not only to win but even to survive because the owners are trying to find him a tamed girlfriend. And even in Africa, it is not easy to find such a hippopotamus, after all, hippos are not common pets ..