The tiger is the largest animal in the entire feline family, reaching 290 kg. Even the largest African lions are inferior to the tiger in size – they weigh no more than 227 kg. 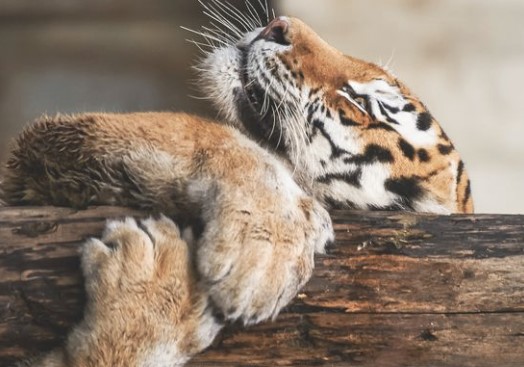 Tiger tracks are well known to many researchers. They measured them many times, photographed them, sketched them, described them.

The average size of the front paw print of a male Amur tiger is 16×14 cm, for a female, 15×11.5 cm, but there are also larger tracks. If the track is 20 cm or more long, it means that it was left by a very large male. By the width of the heel – the metacarpal crumb of the front paw, it is possible to approximately determine 4 age and sex groups of tigers: if the heel width is 10–15 cm, this is an adult male weighing 200 kg or more, if 9–12 is an adult female up to 150 kg, if 6–8 – a young three-year-old tiger, which can weigh from 70 to 120 kg, and if 3–5 cm – with a gain of 30–60 kg (in the deluded tiger, the heel width and the size of the paw print approximately correspond to the size of the lynx track, but at this age the tiger keeps still with her mother). The tigress has a slightly narrower paw print than the male, and the fingerprints are comparatively thinner. In the male, the track is more rounded and the middle thick fingers are especially prominent.

Gender can be easily determined by finding tiger urine. The tigress urinates in one place and a thawed patch forms on the snow, and a puddle forms on the soil. The male sprinkles some protruding objects.

By the difference in the paw prints of various animals, one can judge the fatness of the animals. Healthy tigers have a clear and deep footprint. The skinny ones have shallow prints, and wrinkles are visible on the crumbs of the sole.

The most frequent gait that a tiger uses during transitions is a leisurely pace. Stepping, the beast puts its paws almost in a trace. The step width, depending on the size of the animal and the speed with which it moves, can vary from 50 to 100 cm.