The dragon from the island of Komodo (lat. Varanus komodoensis), aka Komodo monitor lizard, also a giant Indonesian monitor lizard is a lizard with the most impressive dimensions in the world.

The average weight of the giant is 90 kg, and the body length, respectively, 2.5 m, while the tail occupies almost half of the body. And the length of the most powerful specimen, the parameters of which were officially recorded, exceeded 3 meters with a weight of 160 kg.

The appearance of the Komodo dragon is the most predestined – either a lizard, or a dragon, or a dinosaur. And the island natives believe that most of all this creature looks like an alligator, and therefore they call it Boyya Darat, which in translation from the local dialect means a land crocodile. And although the Komodo dragon has only one head and does not spew sheaves of flame from its nostrils, something aggressive in the appearance of this reptile is undoubtedly present. 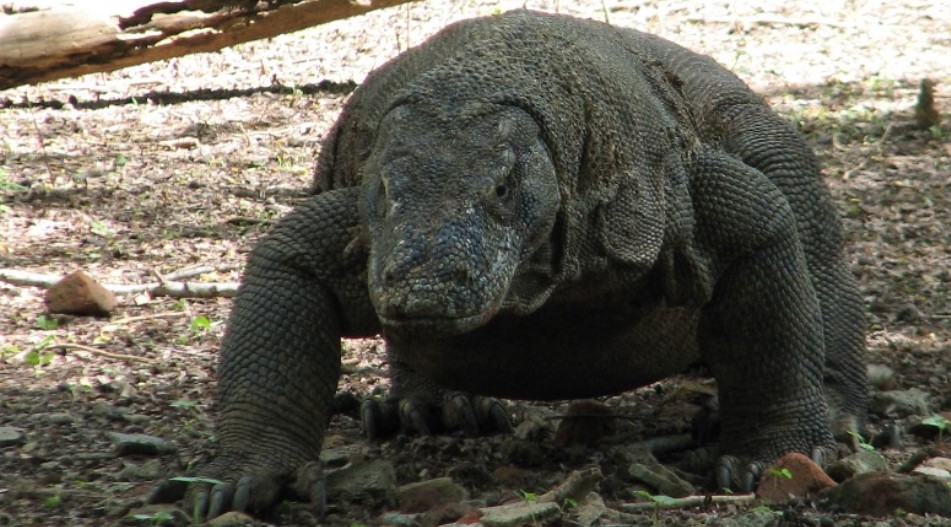 This impression is enhanced by the color of the monitor lizard – dark brown, with yellowish blotches, and (especially!) The appearance of the teeth – squeezed from the sides, with cutting, jagged edges. A quick glance at this perfect arsenal, which is a “dragon” jaw, is enough to understand that the Komodo dragon is not a joke. With over 60 teeth and a shark-like jaw, isn’t this the perfect killing machine?

What is the diet of a giant reptile? No, no, lizards have only a superficial resemblance to vegetarian dinosaurs: the Komodo dragon’s gastronomic preferences are strikingly different from the food preferences of an ancient ancestor. The tastes of the lizard are distinguished by an enviable variety: it does not disdain carrion and readily absorbs any living creature – from insects and birds to horses, buffaloes, deer, and even its own brethren. Maybe it is for this reason that newborn lizards, having barely hatched, immediately leave their mother, hiding from her in the dense crown of trees?

Indeed, cannibalism is quite common among Komodo dragons: in the lunch menu of adult monitor lizards, young relatives, smaller in size, often turn out to be. A hungry monitor lizard can pose a threat to humans, and there are often cases when the prey coincides in its weight category with the attacker. How do the lizards manage to prevail over the prey? The monitor lizards hunt down large prey from an ambush, and at the time of the attack, they either knock down the victim with a powerful blow of the tail, breaking its legs or bite into the flesh of a wild boar or deer with their teeth, inflicting a deadly lacerated wound.

The chances of survival in a wounded animal are scanty since during a bite dangerous bacteria penetrate into its body from the mouth of the lizard, as well as poison from the poisonous glands of the reptile’s lower jaw. The inflammation develops at an accelerated pace, and the Komodo dragon can only wait until the victim is completely exhausted and unable to resist. He stubbornly follows the wounded prey, not letting go of it. Sometimes such tracking lasts up to three weeks – after so much time, a buffalo bitten by a monitor lizard dies.

Those wishing to see such lizards in their natural habitat would have to go to the Indonesian islands since the Komodo dragons live there. However, daredevils who have conceived such a journey should be as careful as possible: monitor lizards have a keen sense of smell, and even a tiny drop of blood from a minor scratch on the body can attract a lizard located at a distance of 5 km with its smell. There have been cases of attacks on tourists, so the huntsmen accompanying the tourist groups are usually armed with long strong poles. Just in case.