The homeland of Korat cats in Thailand. The first written mentions of it date back to the XIV century. The breed is named after one of the country’s provinces. Presumably, the animals originated from the town of Ampur Pimai.

This call cats of the Korat breed – “blue happiness” (si-savant). In the east, he is covered with myths, animals were credited with magical abilities: to bring wealth and good luck to the owners, to protect crops from drought and bad weather.

In Europe, animals appeared in the 19th century. Korats were presented in 1897 at the National Cat Club exhibition in Great Britain. By mistake, the contestants were mistaken for representatives of the Siamese breed and disqualified for not meeting the standard.

Korat breeding began in the United States in 1958. The owner of the cattery Cedar Glen received two kittens of this breed as a gift. By the mid-sixties, the breed is becoming popular. But the CFA received official recognition only in 1966. English technologists recognized Korat cats as an independent breed only in 1976. The champion title Si-Sawat at the British National Cat Show was obtained in 1983. 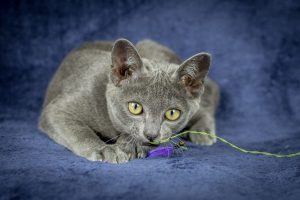 The standard defines the following parameters:

Fractures of the tail, more or fewer toes are not allowed.

Korat cats are short-haired, with short, fine hairs that fit tightly to the body. No undercoat. When the animal moves, the wool is dispersed in “waves” along the ridge.

One-color is allowed – silver-blue. The silvery hairs form a halo. The more there are, the higher the animal is valued.

Kittens can be born with an unexpressed tabby pattern. By the year it passes. 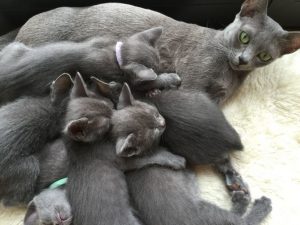 Any deviation from color will result in disqualification. White hairs, spots, medallions are unacceptable.

The lips and nose are dark blues, such as lavender. The standard defines the color options for the paw pads from dark blue to lavender with a pink undertone.

Korats become attached to the owner, need attention and affection. Human society is important as a pet, long-term loneliness has a detrimental effect on the psychological state of cats and cats. The animal will be happy to spend time surrounded by all family members.

By nature, cats and cats are self-confident, purposeful. They are smart, well trained. It’s easy to teach them the rules and routines.

Emotional intelligence is developed in animals. They feel the mood of the owner, help relieve tension.

Animals do not tend to climb to a height. She will attract the cat if she needs to investigate a new object. Korat prefers to follow what is happening, lying on the sofa or the floor, on the lap of the owner.

The representatives of the breed are frightened by loud, sharp sounds. Hiding after the sound of a vacuum cleaner or the sound of a drill. Animals do not tolerate abuse, screaming. An unfavorable emotional climate in the house leads to the poor health of pets.

The attention of all family members is important to Korat. They get along with children but do not tolerate unceremonious relationships. Aggression responds to aggressive behavior. They are annoyed by guests, especially noisy ones. Cats try to hide before leaving.

Korat Cats and cats get along only with their own kind. They are annoyed by representatives of other breeds. They do not find a common language with dogs, they perceive guinea pigs and parrots as prey.

Korat is talkative, but in extreme cases (illness, hunger) they meow loudly. Cats draw attention to themselves with low melodic sounds.

Animals don’t rush into the street. They will not run through an open door or window. But they love to lie on the windowsill and watch the street life. 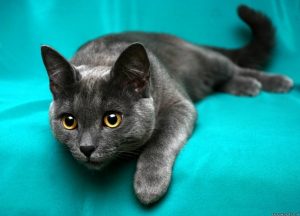 The Korat value comfort. Instead of labyrinths or climbing structures, your pet should buy a comfortable bed. It is better to put the basket in a secluded place.

Cats are smart, quickly get used to the tray, feeding regime. They understand prohibitions. You won’t catch your pet off guard at the dining table. If you have a scratching post, animals do not spoil furniture or wallpaper.

Korats are not adapted for independent walks. Breeders recommend walking your pet on a harness two or three times a week. You can accustom a kitten to such walks after six months.

So that the animal does not get bored, they give birth to two representatives of the breed at once. This makes the Korat easier to tolerate loneliness.

They start raising a kitten from an early age. If you do not teach your pet to discipline right away, he will bully. It is difficult to wean Korat from “bad habits”.

A short, thin coat without an undercoat does not require frequent brushing. It is enough to do this every 5-7 days. A soft natural bristle brush or a special rubber glove will do. During the molting period, the cat is combed three to four times a week.

Cats do not need frequent washing. Water procedures are shown as contaminated. After bathing, the animal is dried with a terry towel, wrapped in it for 5-10 minutes. There is no need to comb the wool. After drying, wipe with a piece of suede.

The eyes and ears of the pet are examined daily. Every other day, they are wiped with a cotton pad dipped in a special solution. A separate cotton swab is used for each eye and ear.

The teeth of the animal are cleaned once a week with a special paste. The kitten is accustomed to the procedure for three or four months. Trim your nails every 7-9 days.