Cornish Rexes are very quick-witted, attached to the owner, perfectly trainable, and even allow themselves to be walked on a leash.

These animals are characterized by innate intelligence and aristocracy: cats do not mark the territory, do not steal from the table, do not rub against everything and everyone. Representatives of this breed are absolutely not aggressive and unforgettable.

Cornish Rex is a cat breed that cannot leave anyone indifferent. The appearance of the animal is so unusual that people are either completely delighted with it, or vice versa – they are horrified. Looking at Rex, many come to the conclusion that he is very similar to a guest from another planet, to such a “velvet alien”. 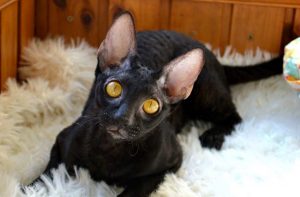 This cat seemed to descend from the wall paintings of the Egyptian pyramids, becoming their living embodiment. And if not everyone is ready to appreciate such an exquisite appearance, then the unique character and affectionate disposition will win everyone’s heart.

Rex is a breed of domestic cats. To date, several varieties of this breed have been bred, each of which is described in detail. The exterior of each species is united by a dense curly wool cover. The fur coat is extremely velvety and shiny, like silk, to which hands involuntarily reach. What makes it so special is the lack of guard hair.

It is not for nothing that the Cornish Rex is called the “royal” breed. Thin bones, slenderness, long legs, graceful movements, straight profile, and expressive eyes – all this is so harmoniously combined with the embossed coat that the appearance of the animal really acquires “aristocratic” features.

The first kitten with close-fitting curly hair and huge locator ears was born on an ordinary English farm. The cat’s owner bred rabbits; By a strange coincidence, the main breed on the farm was rabbits with curly coats. There was only one unusual kitten in the litter. Despite its strange appearance, the animal was completely healthy. When he grew up a little, the owner showed the pet to professional felinologists.

Attempts to obtain curly offspring were not immediately crowned with success. When mating a curly cat with ordinary domestic cats, smooth-haired kittens were invariably born. The first successful litter was obtained after a closely related cross. It turned out that the gene for curly hair is recessive and difficult to fix.

In 1957, two kittens with curly hair were taken to the United States. There, representatives of the new breed were actively crossed with orientals: Thai, Siamese, and other cats. As a result, the American line of Cornish Rex was formed, the appearance of which is somewhat different from the European but meets the same breed standards. Today, only Cornish Rex mating is practiced, straight-haired cats and representatives of other breeds are not allowed in the selection process.

Cornish Rexes have an original appearance that fascinates even people who do not like bald cats. The appearance of the ideal representatives of the breed should have the following characteristics:

Males are larger than females. The overall impression is a harmonious, graceful animal with smooth, mesmerizing movements. To the defects extra toes on the paws, “broken” or too thick tail, hard guard hairs, visible in the coat. 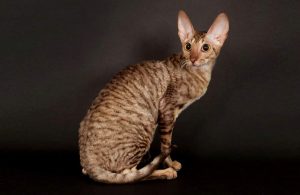 Cornish Rexes have an excellent appetite and are prone to overeating, so the pet’s diet should be monitored. The representatives of this breed have excellent immunity and good health. No hereditary diseases are observed. However, they must be protected from drafts and hypothermia.

A recessive gene is responsible for the curly hair of the Cornish Rex, therefore, at the very beginning of the breeding work, to prevent inbreeding, the Rex was crossed with other breeds – the Siamese cat and the ordinary domestic cat.

Currently, mating Cornish Rex with other breeds is prohibited. According to the breeders, it is not difficult to breed these cats: they have good health, an excellent gene pool, and do not need help with childbirth.