The Kurilian Bobtail is the owner of a unique character and a very special tail, which determines the purebreds of each animal.

Bobtail This group of semi-longhair cat breeds is currently very popular. High intelligence and friendly character, together with an unusual wonderful pompom tail, helped these pets gain fame as one of the best pets. In character, they are very similar to their namesakes – Bobtail herding dogs. They will follow you everywhere and look faithfully in your eyes. There are several cat breeds of Bobtail: Kurilian, Mekong, and Japanese. 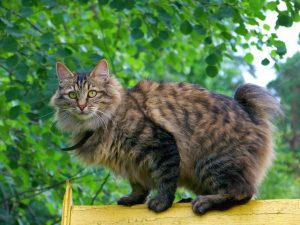 Everyone catches the eye with an unusual tail – in a bobtail, it is small and round like a pompom.

Kurilian Bobtails are semi-long-haired and short-haired. 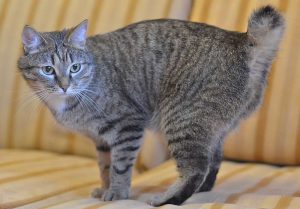 They are sociable, active, and loyal cats, easily amenable to education. Bobtails are great hunters, they are playful and not afraid of water.

Kurilian bobtails are monogamous, devoted to one owner all their lives.

Adult cats are noticeably larger than cats. The weight of cats can reach 7.5 kg, while female bobtails weigh an average of 4-5 kg.

Both shorthaired and semi-longhaired cats of this breed do not need special care. They have a dense coat that is not prone to clumping.

The short-tailed gene does not affect the body of cats, they have no health problems.

The nature of the Kuril bobtails has endowed not only with pompom tails. Life in the harsh conditions of the Kuril Islands demanded special courage from cats. Probably, this is the origin of an extraordinary firmness in gaze and inhabits – fantastic confidence and phenomenal ingenuity. Apparently, such a complex natural training to some extent determined increased stamina, patience, endowed these animals with exceptional intelligence.

Living for many years in the harsh conditions of the wild, the animal has developed the qualities of a brilliant, unsurpassed hunter, a calm animal with a stable psyche, an adequate, good-natured, but at the same time, independent, dignified pet. Like all cats, bobtails are unusually curious and inquisitive. Wits, combined with the irrepressible energy of this cat, will revive any home.

Kurilian Bobtails are very jumpy due to strong hind legs and strong muscular body, mobile, and active animals. But it is worth noting that such jumping ability does not cause trouble for the owners – it is more than compensated for by the intelligence and good manners inherent in this breed. You must make sure that the kitten has space where you can play, climb and jump as much as possible.

The “smokers” have a brilliant intellect! Communication with this cat, observing its habits, pranks, tricks, and leprosy, close contact with the animal – all this can bring the owner incomparable pleasure. They have some kind of mysticism, some kind of mystery, completely inexplicable, but bright charisma, the natural charm of a wild beast.

Kurilian Bobtails are very friendly cats. Having been guilty and having received punishment, they will never conceal resentment and evil against you, but on the contrary, they will begin to follow you and look with such a captivating look that your conscience will torment you – why did you punish such a cute creature. They are not at all rancorous and are very well trained, attentive and intelligent: it is enough to point them out once or twice to the existing prohibition, and they will understand everything and get used to ordering.

Another of the nice features of the Kurilian Bobtails is their individualism. Each cat, each cat is unique, one and only.

The Kurilian Bobtail kennel or even just a house where several pets are kept – this is a whole gallery of characters! And affectionate cuties, and grumblers, and pronounced leaders, and capricious, and phlegmatic, and lively. And whatever your animal is – it is always charming and beautiful. Even their meows can be incredibly expressive! By the intonation of the voice, you can understand what mood the pet is in, what he wants, and what he is trying to “tell” us. 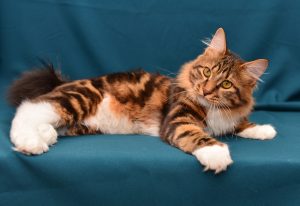 In some character traits, bobtails are similar to dogs: they easily master aport (bring a toy or a ball to play), are suspicious of strangers, can defend their territory and owner, always warn in advance about dangerous situations (there are many cases when the Kurilian Bobtail persistently warned a person about a gas leak, a short circuit, and even an impending earthquake). Being in a good mood, “Kurilets” gladly fulfills the commands-requests of the owners, which it recognizes instantly.

Animals distinguish and understand up to 1.5 thousand words, phrases and expressions. As a result of observations of various individuals of this breed, we can confidently assert that they have logical thinking. To get what they need, to get your attention, they will do their best, and if the first attempt fails, they will undertake the second, third, but with changes/additions made to their actions.

The Kurilian Bobtail has a pronounced hunting instinct. He is an unsurpassed catcher of everything that moves, flies, and crawls! So there is no equal in catching mice, butterflies, flies … There are simply no bobtails! But if they are pets, then the bobtail will never touch them. It can gently lick and hug rat and budgerigar puppies. Smoked, appearing in your house, will immediately become the main animal. All other breeds of cats recognize the primacy of even the little Kuril, who knows his own worth. They not only get along with dogs but also become best friends.

From the first moment the animal appears in the house, you will feel that he is a full member of the family. One of the features of bobtails is their attachment not to the house, but to the person. The location of the smoker must be earned! He chooses from the family “Head” for himself – the owner.

The Kurils love people very much, follow them steadily and all the time with them, like a shadow. 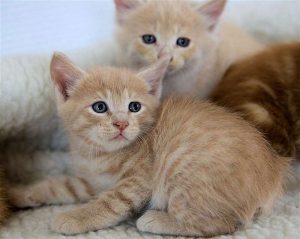 Kittens are easy to learn. Using the natural inclinations of the animal, you can easily learn to bring a stick “fetch”, as well as light slippers. Your pet (if he is in the mood) will do it with great pleasure!

If a person is lonely, then he will not find a better companion than a Kuril one: a bobtail will keep you company both on a walk and on a visit. Both the owner and the cat will get real pleasure from such close communication.

The Kurilian Bobtail has a sense of tact, very subtly feels the inner state of a person, does not irritate. But if you are upset or just sad, you will immediately catch the pet’s questioning glance. Your cat will immediately make it clear that he is around and you are not alone.

He will always greet you from work or from a walk, and if he feels that you are in the mood for this, he will speak in your ear for a long time or quietly about what happened in your absence. In the morning, he will gently wake you up by licking his cheek in a friendly way. Many cats like to “slap” the owner on the cheek or stick their muzzle for a kiss. Well, if you want to play with him – get a charge of good mood for the whole day! From an early age to adulthood, bobtails spend a lot of time playing and learning about the world around them.

Also, Kurilian bobtails are great nannies for well-feeling children. They will never scratch the child. They will always be somewhere around, watching him. And if suddenly the child cries, they will go and call you. Since bobtails are very mobile, they actively participate in children’s games and entertainment. And since they have logical thinking, they will always find something to entertain your child (or how to have fun with him). Teach your child to handle the cat correctly (do not hit, do not offend) and you will not find better friends than your child and your pet!

Like their wild cousins, Kurilian Bobtails reach sexual maturity at the age of 5-12 months (as in puberty children). During this period, they try to choose their status in the family clan and distribute places for family members according to the chosen ranks. They usually assign themselves a leadership role, while family members assign minor roles. During this period, it is especially important to show the bobtail that it is you and your family members who are taking higher steps than your pet. This must be done carefully, BUT STRONGLY. Having received a worthy rebuff, these smart cats choose the best option for themselves – the place of everyone’s favorite.

Any color is acceptable, except for point, like in Siamese, and also brown, chocolate, and lilac, like in Burmese. Complete taillessness is considered a defect of the breed.

Crossbreeding with long-tailed breeds is prohibited by the standard.