Lyalius striking in its color will become a worthy decoration of any aquarium. Its calm nature and affordability make it a good fish for both experienced and novice aquarists.

Lyalius (Colisa lalia) is a popular aquarium fish that looks great both in the species and in the general aquarium. It was originally assigned to the genus Colisa, but nowadays many biologists are inclined to consider it a representative of the genus Trihogaster due to the presence of pelvic fins modified into thin sensitive filaments (like in the closest relatives – gourami). They allow the fish to navigate in troubled waters. 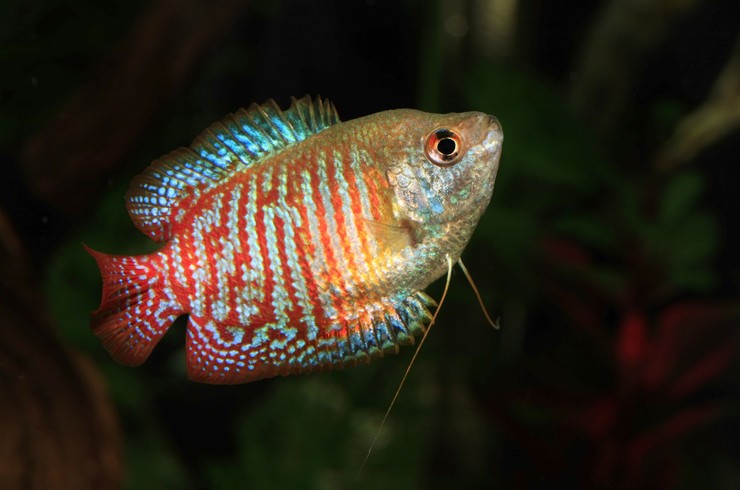 Lyaliusi is labyrinth fish. In the head of the fish, there is a special organ – a labyrinth, consisting of plates densely braided with blood vessels. It allows atmospheric air to be swallowed and used for breathing. Thanks to this, Lalit is able to survive without any problems in reservoirs poor in oxygen, even such extreme ones as irrigation canals and rice fields.

Keeping in the aquarium will not be difficult, while the imposingly swimming flock of Lalius will always be in the spotlight.

Lyaliu`s is a relatively small fish, males grow up to 7.5 cm in aquariums, females are slightly smaller – up to 6 cm. The body is compressed from the sides, narrow, fins are large. In the process of evolution, the pectoral fins have evolved into thin threads that serve as the organ of touch. 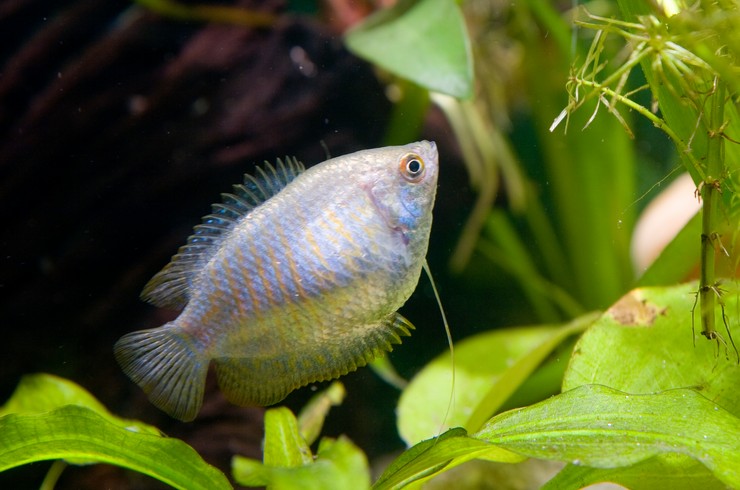 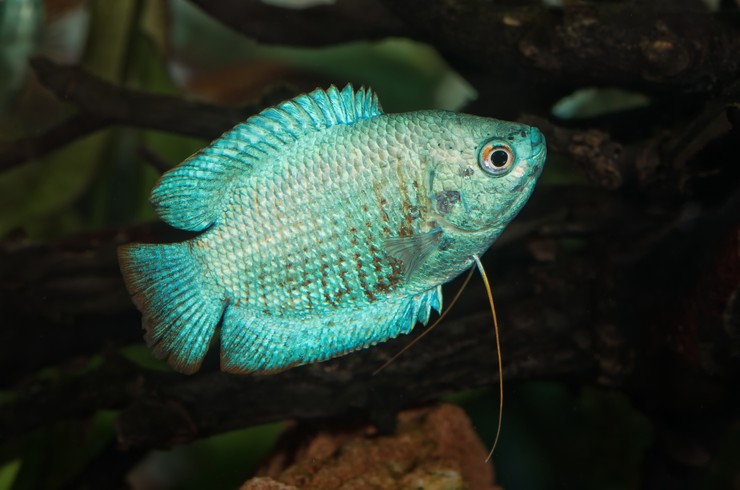 The famous researcher Francis Hamilton first described lalius in 1833. The historical homeland of fish is the reservoirs of Pakistan, India, Bangladesh. Typical biotopes are slow-flowing streams, rice fields, irrigation systems, overgrown lakes. Timid by nature, lalius prefers to live in places with dense thickets of plants, which serve as a natural shelter from enemies.

Given the small size of the fish, not much space is required for lalius. The minimum volume for a couple of fish is 20 liters. However, for a more comfortable existence, it is recommended to stop at a capacity of 40 liters or more. The aquarium must be installed in a quiet, calm place because the fish is very shy and does not like loud sounds. The lighting should be intense, then the fish “flash” very brightly and attract the eye even more.

The presence of a labyrinth organ in Lalius allows them to do without forced aeration, but it is better to install a filter so that the water is clean and transparent. Just don’t create a very strong current. Lyaliusi is weak swimmers, and they will be uncomfortable in a strong stream of water.

It must be remembered that for the breathing process, lalius have to regularly float to the surface in order to capture a new portion of air. Therefore, it is necessary that the fish always have access to the atmospheric air, and that its temperature does not fall too low – this can lead to diseases of the fish.

It is better to choose dark soil, on it the fish will look brighter and more interesting. In the aquarium, it is imperative to create a corner with densely planted plants: valid are very fond of swimming in the thickets. 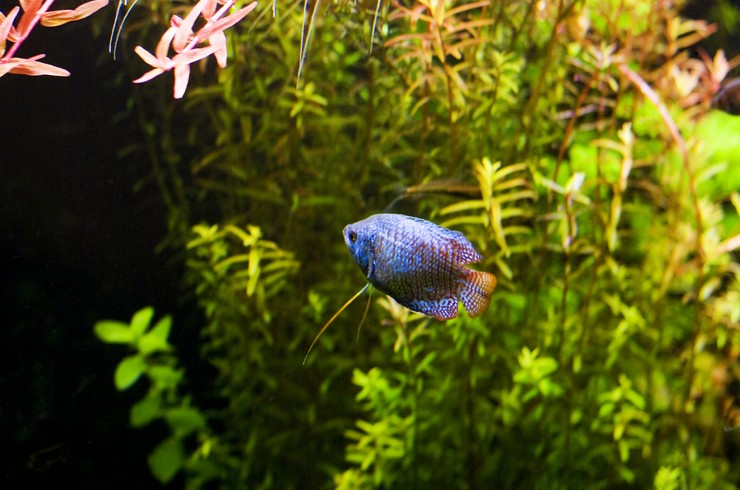 It is desirable to keep it in small groups with a predominance of females to avoid males.

The average life expectancy is about 4 years, but with good care, they can live longer.

Lyalius are great for keeping in shared aquariums. The main thing is not to add him to large and aggressive fish. Neighbors need to be selected close in temperament because too fast fish can eat all the food, while the timid Lalius understands what’s what. Lalius are very calm about other fish.

In the presence of a spacious aquarium, good roommates will be gourami, scalars, calm barbs, irises, labels, corridors, ancistrus. Care should be taken to the content along with the cockerels, often serious disputes flare-up between the fish.

The number of females in the aquarium should always exceed the number of males. If you plant fish in pairs, a particularly active male is able to kill his girlfriend. Therefore, do not neglect the planting of thickets of living plants and other shelters.

The basis of the diet of lalius in nature is insects, their larvae, fish fry, plankton. Fish do not disdain the juicy parts of green plants.

Like their closest relatives, the gourami, laliues have an interesting way of obtaining food – they are able to hunt insects flying over water. From the outside, the process looks like this: the fish freezes near the surface of the water and waits for its prey. As soon as the victim is found and appears within reach, Lalius releases a stream of water and knocks down the insect.

When keeping lalius in an aquarium, it is necessary to provide them with a complete, balanced, and varied diet. When feeding, it must be borne in mind that the mouth of the fish is small, so the food should be of such a size that the fish can easily swallow it. In the assortment of Tetra, you can easily find a dry food that will fully satisfy the nutritional needs of lalius.

TetraPro Color is an innovative food in the form of chips, made using gentle low-temperature technology, which allows you to preserve even more nutrients. Thanks to this, lalii receive food with an optimal ratio of proteins, fats, carbohydrates, and vitamins. Excellent digestibility of food reduces fish waste, and therefore, the water in the aquarium will stay cleaner for a longer time. Chips contain a concentrate of natural dyes that enhance the natural color of the fish, making the male lalius look even brighter.

Do not forget also that plant components should be present in the diet of lalius. TetraPro Algae is well suited for this purpose. In its composition, it contains the algae spirulina, which helps to diversify the diet of fish. Both feeds crumble perfectly in the hands, which allows you to choose the right fraction for feeding fish of any size.

It is necessary to feed lalius several times a day with such an amount of food that they can completely eat in a few minutes. 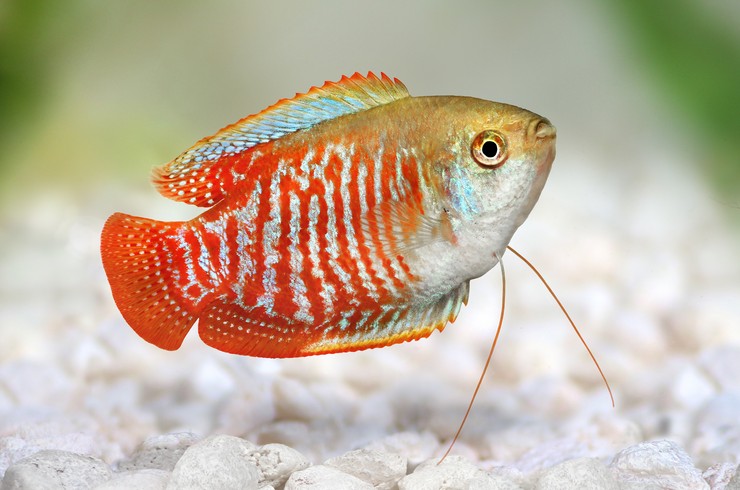 As noted earlier, the sex differences in Lalius are very striking. Therefore, if you want to start breeding these beautiful fish, it will not be difficult to pick up a couple. And the relative ease of breeding allows even novice aquarists to try their hand.

First of all, you need to arrange the correct spawning grounds. The optimal volume for it is at least 40 liters of water. Water is poured into the spawning box to a level of 15 cm. There is no need to fill a full aquarium. Firstly, a low water level additionally stimulates spawning, and secondly, it allows lalius fry to survive until the formation of the labyrinth apparatus. The fish have adapted to live in a fairly wide range of water parameters, but ideally, the water should be soft and neutral. It is imperative to create shelters for the female in the container. Lalius males, ready for breeding, are very aggressive and can beat an unprepared female to death.

It is recommended to plant live plants in the spawning area. The water temperature must be raised to 26-28 ° C. Spawning begins with building a nest. Both the female and the male are involved in this. The nest consists of bubbles and is held together by parts of floating plants (riccia, duckweed, etc.). Individual pairs are able to erect significant nests, which can occupy a quarter of the water surface and have a height of up to 1 cm. With all the apparent fragility, such nests are quite strong and are able to maintain their shape even after spawning is complete.

After the creation of the nest, courtship dances begin, and the male invites his chosen one to spawn. The eggs are deposited directly into the water, where they are inseminated by the male and float to the surface.

The new father collects eggs in the nest and jealously guards it. It is better to plant the female at this time. The first fry usually appears within 24 hours. The tiny larva spends several days in the nest, and after a week is ready to swim on its own. At this time, it will be useful to plant the male, because constantly scurrying young can provoke him to eat the offspring.

Most often, lalius fry dies in the first days after spawning due to hunger. Juveniles can be fed with brine shrimp nauplii, micro worm, ciliates. TetraMin Baby food will have a positive effect on the development and growth of fish. It is necessary to feed young fish several times a day.

It is important to regularly sort the fry by size. Otherwise, more developed individuals will calmly feast on younger brothers.

You can switch to an adult flake food after the fry grows to a size of 1 cm.