To diversify the population of their aquarium, hobbyists often have a variety of invertebrates. Not the last place in the list of such pets is taken by snails. Among them, there are both small “weedy” species and very beautiful large mollusks. In our article, we will tell you about the maintenance of the mariza – a cute striped snail that aquarists love, even despite the gastronomic love for live plants.

Mariza (Mariza Cornuarietis) is an aquarium snail that is famous for its exorbitant appetite. The mollusk originates from South America. It is a close relative of the well-known ampulla.

A typical herbivorous species that should not be planted in a herbal tank. At the slightest lack of food, snails will take up living plants and can eat them at the root. The mollusk appetite is even used in some countries to control invasive plant species.

However, the snail has a spectacular appearance thanks to its large shell and contrasting stripes on it.

Mariza snails have a dense spiral-wound shell of 3-4 turns. It is flattened and its width can reach 2 cm, height is about 5 cm. The lid covering the mouth is small enough and completely retracts into the shell.

The shell color is variable and varies from yellow to brown with a number of longitudinal stripes. There are forms with a single color without stripes. The body itself is chocolate or flesh-colored, often with small specks. 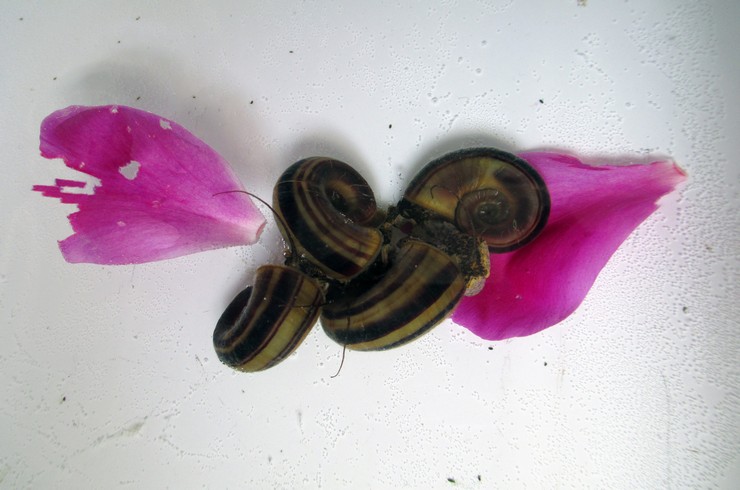 The mollusk breathes with the help of gills or lungs. For the latter to work, the marizes are forced to rise to the surface of the water and throw out a short (up to several millimeters) breathing tube. Proboscis-shaped mouth. In the head part, there are movable tentacles, at the base of which are the organs of vision, which, however, are able to distinguish only dark and light areas.

If you need to feast on the protein film on the surface of the aquarium, the marizes twist the sole of the foot like a funnel and swallow food with their mouth.

Marise’s leg is muscular. Thanks to her, the mollusk is able to develop a sufficiently high speed.

The birthplace of the mariza snail is South America. It lives in fresh, slow-flowing waters in Brazil, Venezuela, Honduras, Colombia, Costa Rica, and Panama.

It can be found in irrigation systems, swamps, lakes, and ponds. Marizes live at a shallow depth among dense thickets of aquatic plants. Occasionally, snails are found in brackish waters. It has been established that marizes tolerate increased salinity well, but cannot reproduce in such water.

Thanks to the artificial settlement, the area of ​​the mariza has expanded significantly. Currently, the snail can be found in the southern states of the United States and Cuba.

Keeping Marize snails at home does not present any difficulties. The minimum recommended volume for a group of shellfish is 20 liters. The aquarium should be equipped with a lid since the marizes are fans of the “floor” journey.

Good filtration and aeration are encouraged.

Particular attention should be paid to the parameters of the water in the aquarium. The water of medium hardness (8-25 DH) with a slightly alkaline reaction (pH = 7.5-8.0) is best suited. This requirement is explained by the fact that in soft and acidic water, marizes have problems with shell development. 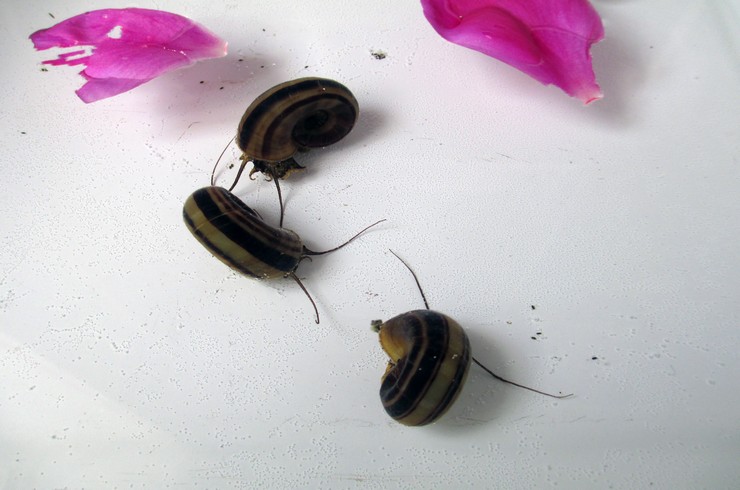 Marizes are tropical snails, so they like warmer water. The comfortable temperature for mollusks is 21-25 ° С. At higher rates, the metabolism, activity, and reproduction rate are accelerated in marizes, but the life span is reduced.

Marizes are peace-loving snails that will not attack fish. In danger, perhaps, only caviar, which can become a clam meal. Otherwise, there are practically no restrictions on the joint residence. It is recommended to exclude from this list only large cichlids, as well as well-known snail-eating snails – bots, tetragons. Snails go well with goldfish, which are usually kept without living plants.

It is not recommended to use Marizes in aquariums with a large number of live plants: snails will most likely chew on them.

Marizes are omnivorous snails, so there will never be a problem with their food. They eat dead plant debris, filamentous algae, bacterial plaque, fish eggs, and, of course, dry food. Sinking tablets with a high spirulina content – Tetra Pleco Spirulina Wafers are especially suitable. Given the excellent appetite of the Marize, they should be fed regularly.

Marizes are dioecious snails. The color of the leg allows you to distinguish the male from the female: in females it is chocolate, and in males, it is beige with spots.

Mating is long, sometimes stretching for several hours. It should be noted that the process takes place only in warm water (25-27 ° C). The female lays eggs in a gelatinous cocoon on the leaves of plants or decorations. The eggs appear as white spots no larger than 1 mm. But they gradually increase to 4 mm. 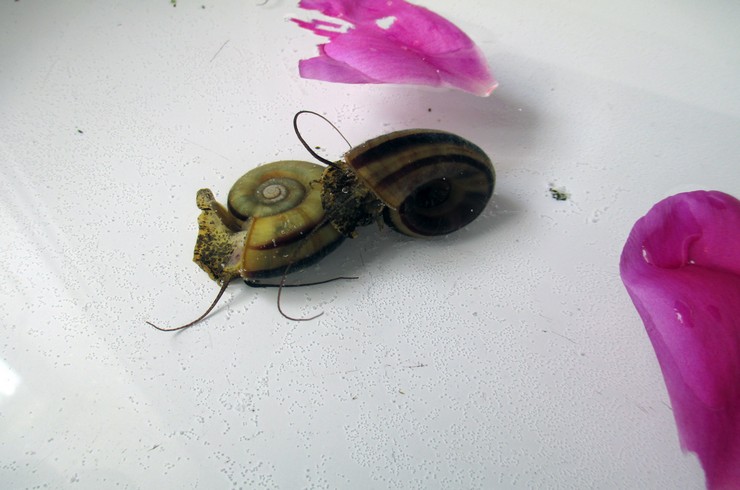 The incubation of eggs lasts two to three weeks, after which the fry eat away the shell of the cocoon and go outside. At first, they keep in a group and eat up the remains of their old house, after which they crawl around the aquarium in search of food. Despite the fact that there may be more than a hundred eggs, not all snails survive. Some die from lack of food, some are sucked into the filter.