The Neapolitan Mastiff is a massive dog with thick folded skin, a fierce guard who scares off strangers only with his formidable appearance and at the same time the most loyal and loyal family friend.

The Neapolitan Mastiff (or as it is also called – Napolitano Mastino) is a brutal and massive dog with a sad expression of a folded muzzle. Huge watchdogs that accompanied the army of Alexander the Great on campaigns have more than 2000 years of history of the formation of the breed. Not suitable for beginner breeders. 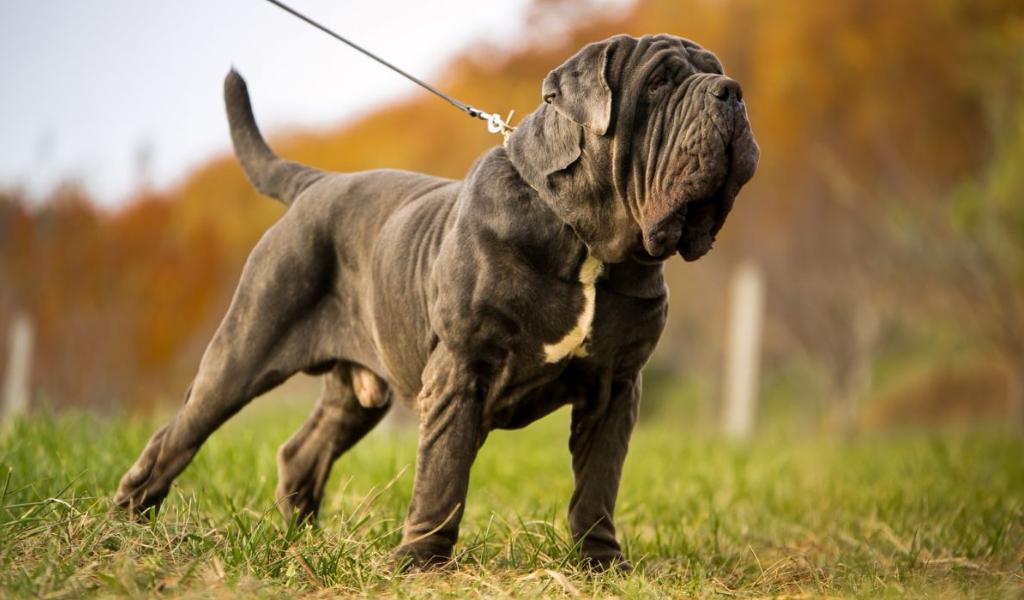 The ancestors of the Neapolitan Mastiff were ancient fighting dogs that fought alongside the Roman legionaries and spread throughout Europe in direct proportion to the expansion of Roman influence. The ancestors of the casino performed in the circus arena and were used for hunting. The breed is a close relative of the Cane Corso. The modern type of casino emerged in 1947 through the efforts of the breeder P. Skanziani.

The breed was recognized by the international dog registry, the Federation Cynologique Internationale (FCI), in 1949. By the early 1970s, the Neo had gained some popularity in Europe. The first Neo known in the United States was imported by Jane Pampalone in 1973, although Italian immigrants may have brought some of the dogs with them as early as the 1880s.

Some dogs can be smaller or larger than average. 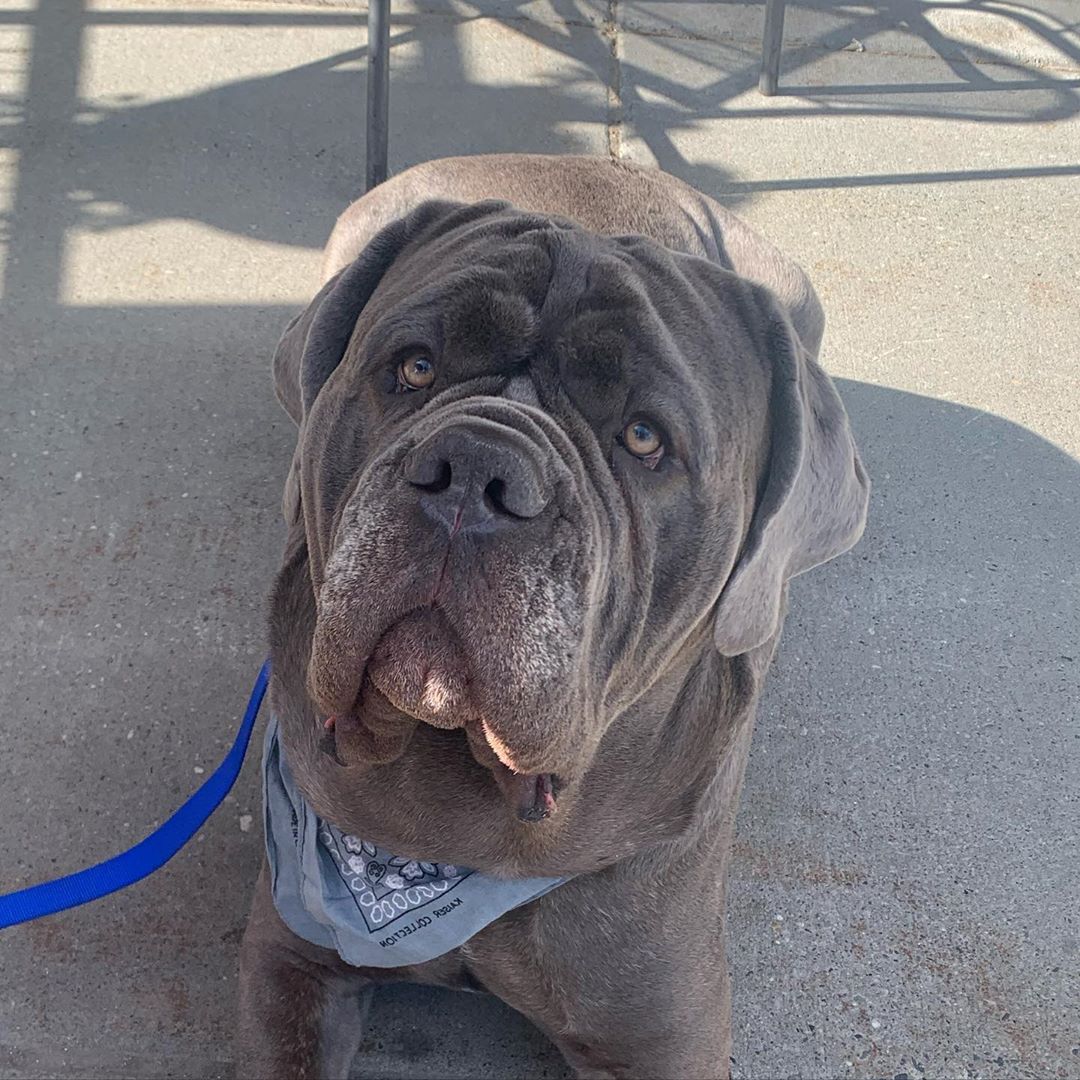 The Neapolitan Mastiff belongs to the group of Molossian mastiff dogs. The body is of an extended format, massive, powerful, with a loaded neck with a double chin, deep and voluminous, very powerful chest, sufficiently prominent ribs, wide withers and back, and slightly sloping powerful, wide croup.

The head is short, massive, with a pronounced transition from the forehead to a short muzzle with powerful jaws, a large nose, and drooping, fleshy, thick lips. The skull is flat and wide. The eyes are dark and round.

Ears set high, drooping along the cheeks, flat, triangular in shape, small, mostly docked to the shape of an equilateral triangle.

The tail is thick at the base, slightly tapering and tapering towards the end. Hangs down to the hock, docked 1/3 of the length. The limbs are massive, muscular, with large, rounded paws with arched, tightly clenched toes.

The coat is short, hard, dense, smooth, and dense.

The color is black, gray, lead-gray with black, brown (to red), red, fawn, sometimes with small white spots on the chest and legs. Brindle is possible (against the background of any of the above colors). 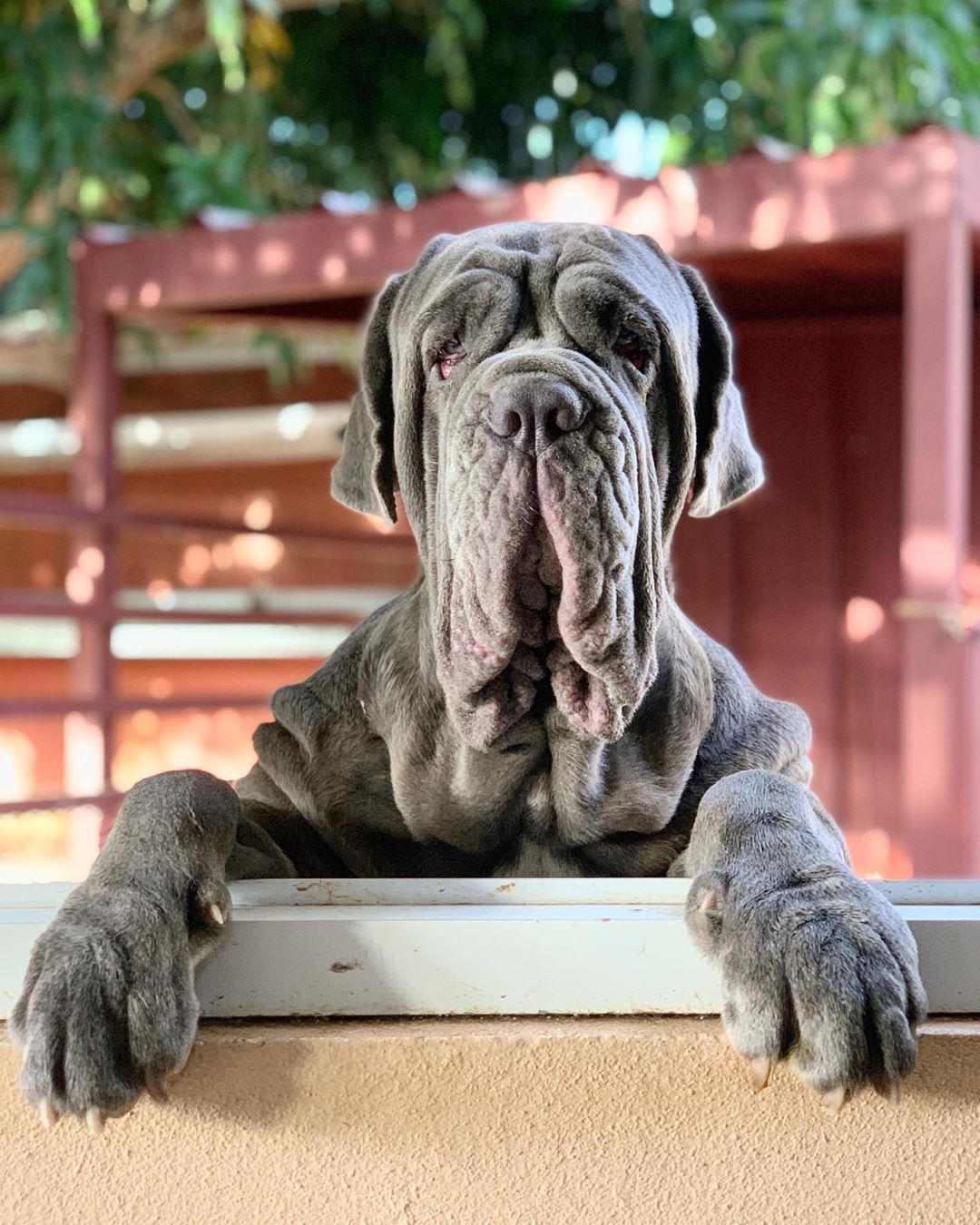 The Neapolitan Mastiff is a non-aggressive, balanced, obedient, alert, calm, fearless, loyal, and noble dog. She is friendly and sociable in a homely atmosphere. Has an excellent memory. Good for all family members. Very rarely barks, distrustful of strangers. Likes to dominate other dogs. Education and training are required from a very early age.

Steady and solid as an oak tree, the Neo is a guardian rather than an attack dog. They’re always alert and aware, even if it looks like they’re relaxing.

If you aren’t home, they simply won’t let anyone onto your property. And really, who’s going to argue with them?

When you welcome someone, though, your Neo will accept that person as well, although they’ll probably remain aloof. This isn’t a “hail fellow, well met” kind of dog.

The Neo is affectionate toward their family, but they’re also strong-willed–and big enough to have their own way. Begin training early, be firm and consistent, and use positive reinforcement techniques, such as praise and food rewards.

The Neo is best suited to a home with a fenced yard. Although they’re a homebody and not prone to wandering, a fence will help them to know the limits of their property, an important bit of knowledge for a guard dog. 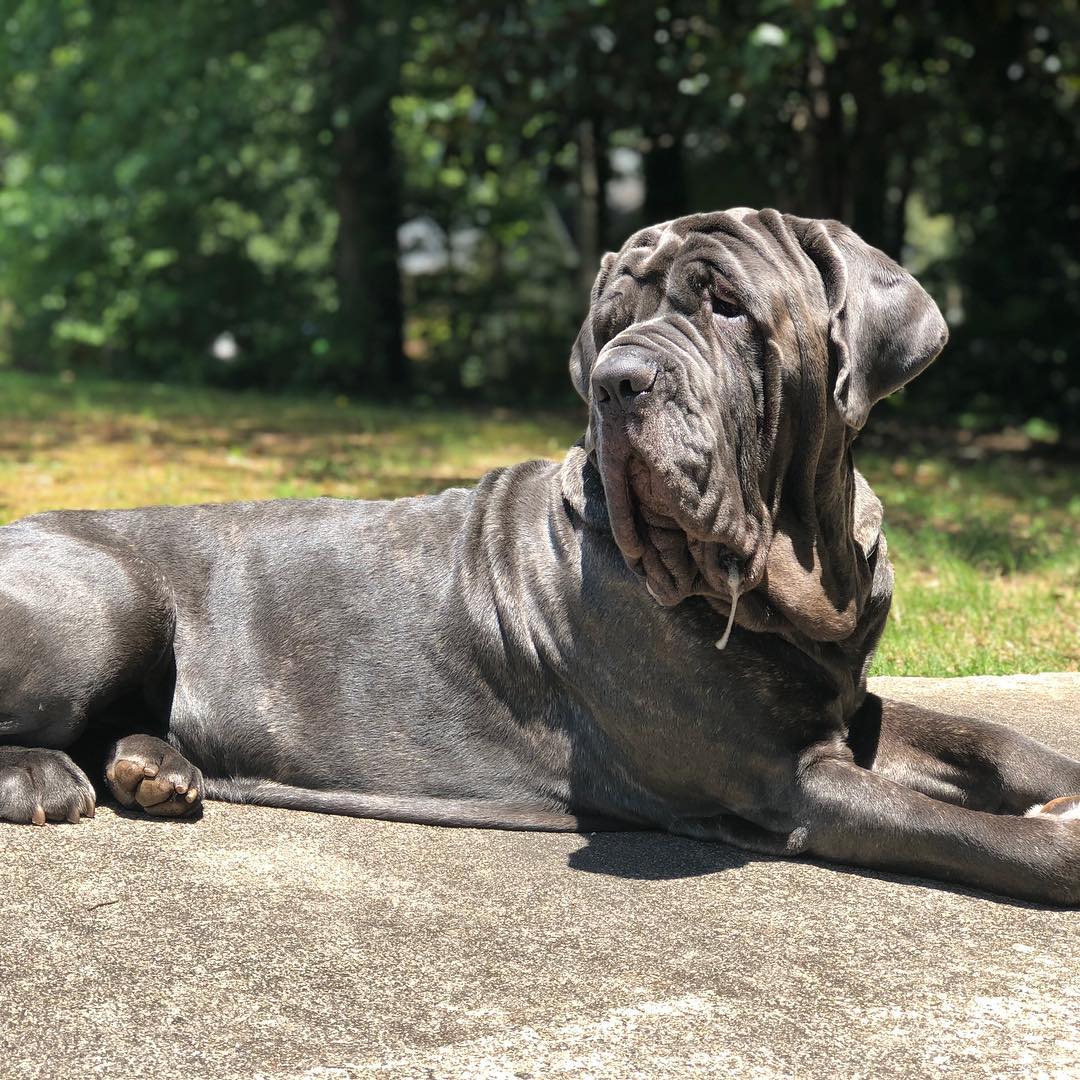 It’s critical to understand your Neo puppy’s physical limitations; exercise them in a controlled manner so their bones and joints don’t undergo too much stress during the formative period.

This means short periods of free running and play and short walks on leash only. Stairs are another hazard for the Neo puppy. They’re clumsy and can easily fall and hurt themselves. Carry them up and down the stairs for as long as possible, and try to restrain your dog from running on them.

Avoid roughhousing or wrestling. You never want your adult Neo to think it’s okay to play rough with you. It might have been cute when they were a puppy, but it can be dangerous once they’re full-grown.

Neapolitan Mastiffs don’t make great jogging companions and are usually happiest when curled up on the couch. An adult Neo will benefit from a couple of short to moderate daily walks, however. They’re sensitive to heat and humidity, so schedule walks for cool mornings and evenings, and be sure they always have a cool place to rest and plenty of freshwaters.

If you have a pool or spa, restrict your Neo’s access to it unless you’re there to supervise. This is a top-heavy dog that doesn’t swim well and has difficulty keeping its head above water. 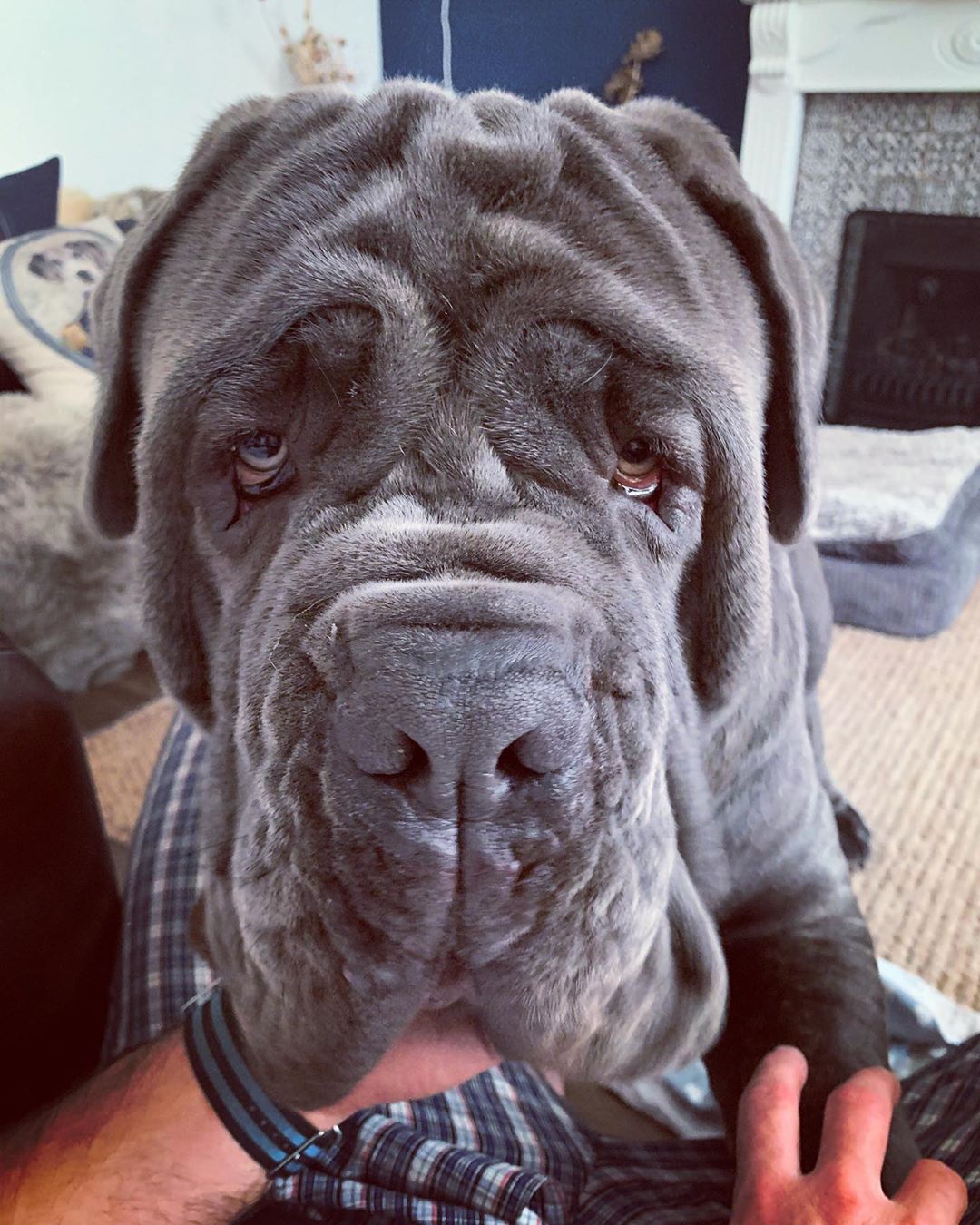 Neo is suitable for families with older children, but they can be too big and clumsy to spend a lot of time with the little ones. Although they never intentionally harm them, this dog can easily knock them off their feet or step on them.

Make it a rule that children should never run and scream in front of Neo. The noise and activity can turn them on and are simply too large to be allowed to chase or play roughly with children.

They may also feel the need to protect “their” children from other children, especially if they are struggling or otherwise appear to be fighting. Always keep an eye on the game so your dog knows you are in charge.

Teach your child never to approach dogs while they are sleeping or eating, and do not try to steal dog food. No dog, no matter how good-natured it may be, should be left unattended with a child.

No don’t like dogs they don’t know, but they get along well with the cats and dogs they grew up with.

This breed is used as a guard dog. An excellent companion for a physically active person. Needs a lot of space and serious physical activity. Regular brushing and care of skin folds are essential.

If you’re interested in adopting an adult Neapolitan Mastiff who’s already gone through the destructive puppy stage and may already be trained, a rescue group is a good place to start. Here are a few nonprofit rescues you can try: