The dragon is the great-grandfather of all monsters. He precedes all evil spirits from demons to vampires. The image of the dragon can be found in rock paintings 25,000 years ago, in which the dragons are somewhat reminiscent of dwarf mammoths.

The dragon is present in the legends of the Chinese of the Shanxi province 8000 BC. He persecuted the Sumerians and Babylonians, the Aztecs worshiped him, the Celts feared him.

In the east, he is a sparkling rain god, in the west, he is a monster that spews fire and devours girls.
The dragon is included in every culture on Earth. The immortal dragon launched its fangs and claws deep into the psyche of humanity. 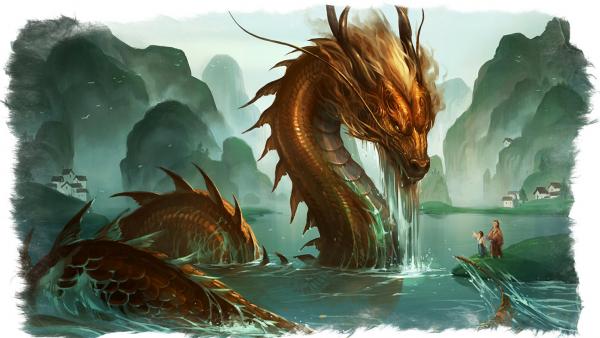 The dragon appears before us in various forms. The most famous dragon in the West is the fire-breathing serpent. This is a classic dragon: a giant reptile on four legs, with huge wings like bats. Armed with razor-sharp teeth and claws, a mighty tail, the dragon preferred to use its most formidable weapon – a jet of red-hot flame, directing it at its victims.

These magical monsters were able to read the minds of people, take the form of animals and people, and restore their damaged organs.

They were covered with impenetrable scales, without a single vulnerable spot.

The Wyvern dragon was very similar to the classic European fire-breathing dragon. At the same time, Wyvern was somewhat smaller in size, rarely breathed fire, and had one pair of paws.
It carried a deadly sting in its tail and could spread disease and pestilence.

The dragon Lindorm or worm was a huge reptile with limbs. Instead of breathing fire, he spat poison or spewed poisonous gas. He could also crush prey by wrapping his steel rings around it.

Basilisks, or snakes, were the smallest but most deadly members of the dragon clan.
They are rumored to have hatched from eggs hatched by toads or roosters.

Basilisks resembled a tiny snake with the comb of a rooster. Their gaze brought instant death. Interestingly, they could kill themselves with a glance if they saw their reflection. The great deserts of the Middle East were inhabited by hordes of sinister Basilisks.

Modern sightings include descriptions of huge, winged reptiles that terrorized the valleys of San Antonio, Texas for several months in 1976.

The dragon, the size of a house, with a long neck, scaly, green, with huge teeth, ate fishermen and animals at Lake Wembury.

In Tibet, about five hundred witnesses in July 2002 saw a black-horned dragon near Lake Tianchie in northeastern China.

Some dragons have been observed much closer to England.

In the early 19th century, folklorist Maria Trevelyan interviewed many elderly people living in the Glamorgan area of ​​Wales.

They told her the memories of their youth (early 19th century) – dragons from the race of winged snakes, according to their words, still inhabit the forest around the castles of the Penllyne area.
The snakes were bright and shiny as if covered with precious stones. They rested, coiled on the ground.

One woman recalled that her grandfather shot one snake after he attacked him. The skin of the slain snake hung for years on the wall of her farm.
Tragically, it has not survived to this day.

In the Church of Cleveland hung the skin of a dragon – a worm killed in the forest by a knight, during the time of Cromwell it was destroyed.

Part of the dragon’s skin – a worm was allegedly kept in Lampton Castle. This specimen was lost when the castle was destroyed in the eighteenth century.

One of the most troubling dragon stories comes relatively recently, when the northeast of England was under Danish rule.
Norwegian sailors were then very afraid of the sea dragon known as Shawnee.

They said that they donated a member of the ship’s crew to appease the beast. After drawing lots, the unfortunate victim was thrown overboard. Shawnee had to eat the victim and let the Viking ships pass.

The dragon, as the story goes, collected sacrifices over the course of many worships, and this barbaric custom persisted for a long time even after the time of the Vikings.

According to local researchers, the cult of worship of this dragon collected human sacrifices in England in the 20th century, which seems amazing.

In the early 1980s, something started killing sheep in a very strange way in North Wales. The killed animals were found to have two punctures in the flesh. Corpses were always near water. Veterinary tests showed that they were all killed by the poison. Sometimes a large snake’s footprint was seen in the grass or mud next to the victims. Strangely, the killers never ate sheep. The strange murders stopped as suddenly as they began, leaving unsettling secrets behind.

Many theories have been created to explain the phenomena of dragons.
All of them are divided mainly into two groups of the camp.
Some believe that dragon legends are based on real creatures of flesh and blood. Giant reptiles or something like that.

Others refer to dragons as paranormal.

Consider the first group of ideas. They are built on the assumption that the fossil remains of dinosaurs and other large animals were the basis for dragon legends.

While they may be logical in some cases, the most common dinosaur fossils are too fragmentary to explain the legends.

We must also remember that many ancient texts specifically spoke of dragons as living beings interacting with humans.

There are some species of living reptiles that can give the impression of dragons. Crocodiles can be huge and deadly predatory. The largest, Indo-Pacific crocodile (Crocodylus porosus) can reach 10 meters (33 feet) in length and weigh 3 tons. She can easily kill buffalo, tigers, and even a shark. The ancient Chinese called such a creature “water dragon”.

In 1950, scientist James Montgomery investigated the legends of a huge monster that lived on the Sagami River. The locals considered the monster to be the father of the devil and threw silver coins into the water when it appeared.

He found him sunbathing in the shallows. The monster turned out to be a giant crocodile. Montgomery realized that the effectiveness of his rifle against such a target would be about the same as that of a toy gun and hastily retreated. He later returned and measured the shallows. It was nine meters (30 feet) long. Since the crocodile’s tail was in the water, its total length was about 10 meters (33 feet).

Another giant is hiding in the waters of the Lumber River. Known as a serial cannibal, he was revered by the Ibad tribe as the king of crocodiles. This crocodile was seven and a half meters (25 feet) long.

The African Nile crocodile can exceed 7 meters (23 feet) and can kill a lion with a single bite. He was worshiped by the Egyptians as the god giving life to the Nile. A seven-meter sample of such a monster is currently stored in Malawi, at one time it ate 14 people.

These armored giants can bite with an effort of 10,000 Newtons. That’s twice the bite force of a great white shark!

The green anaconda (Eunectes murinus) can exceed eight meters (26 feet) and is far more formidable than any python. There are legends about monstrously large specimens of anacondas living in the impenetrable jungles of South America.

The infamous Komodo dragon (Varanus komodoensis) is currently found only on three small Indonesian islands. At three meters (10 feet), it is the largest known lizard in the world.
Komodo kills large prey (such as a deer) with its poisonous saliva. Chinese pottery found on Komodo Island shows that this animal has been known to Eastern sailors since ancient times.

However, this Komodo dragon looks tiny compared to the prehistoric monitor lizards that lived in Australia during the Pleistocene and reached nine meters (30 feet).

Megalania was thought to have died at least 10,000 years ago, but Aboriginal legends and white settlers claim that these giant lizards are found in the Australian outback today. Even a herpetologist (reptile expert) claimed to have personally seen such a monster.

In 1979, herpetologist Frank hunted small lizards in the mountains of New South Wales. After a fruitless search, he returned to his car.

Near him, he noticed a huge raptor about 9 meters (30 feet) long. This scientist was just one of many witnesses who reported such reptiles in the Australian outback.

Some even speculate that the mysterious disappearances of people in the hinterland may be related to the activities of these lizards.

Peter Deakins suggested that dragons may have evolved from huge carnivorous dinosaurs. Their wings evolved from a change in the rib cage.

Perhaps dragons were much weirder. Maybe the dragon exists in a reality that is different from our own reality.

This could explain how they appear, terrorize society, and then disappear again.

Another idea is that dragons are massive, collective, subconscious thought-forms.

None of these explanations fully explain the dragon phenomenon. But keep in mind that when your parents told you that there were no such things as dragons, they lied to you.