Notobranchius is a truly amazing fish, which is distinguished not only by the beauty of its coloration, reminiscent of the pattern of an orchid flower but also by its unusual life cycle, closely associated with regular drought and the rainy season.

Nothobranchius sp. Is a group of fish from the order Carpodiformes, also known as “killifish”. Their main feature is an unusual life cycle, evolutionarily associated with the arrival of the rainy season. For this, they received the name seasonal fish.

As soon as the first drops of rain begin to fall on the territory of tropical Africa after a long dry period, then in almost every puddle filled with water, beautiful fish immediately appear, which grow very quickly and begin to reproduce in a couple of months. They need to lay eggs as soon as possible until the life-giving moisture disappears again. The eggs of Notobranchius are very strong and are capable of being in a state of diapause, or hibernation, for a long time. In this form, they can do without water from six months to a year. The duration depends on the humidity and temperature in the surrounding air. With the arrival of the rainy season, fry hatch again from the eggs, and the cycle repeats.

Unfortunately, this evolutionary adaptation also has a certain disadvantage for aquarists – Notobranchius do not live in an aquarium for more than a year. But even despite this, bright fish do not lose their popularity at all and have been decorating aquariums around the world for over 100 years.

According to estimates by various scientists, the genus includes from 30 to 60 species. This range is due to the wide variety of color morphs that live in nature. It is possible that interspecific hybrids may also be found on sale. Almost every year, new specimens appear on the market, which are either color variations of already known species, or new, undescribed species. Some of them, by analogy with loricariid catfish, are assigned numbers, for example, U-5. 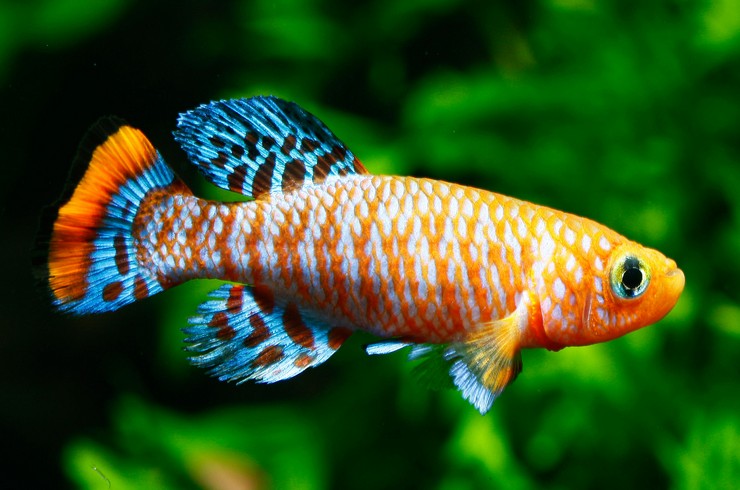 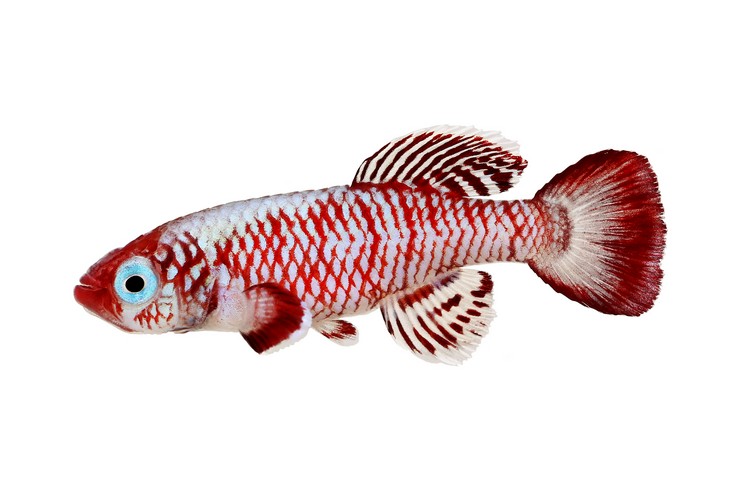 The color of fish (especially males) is very diverse and consists of amazing color combinations. The main body coloration is usually blue, green, or reddish with numerous dark stripes and dots. The caudal fin is decorated with borders in black, red, blue, orange, and yellow.

Females are colored much more modestly – they have a gray-brown body without shine and a border on the fins.

Various species of Notobranchius are widespread throughout Africa. They can be found from Sudan to Zimbabwe. At the same time, in some species, the range is limited to only a few kilometers, while other species are found almost everywhere.

More than a third of Notobranchius species live in Tanzania, which for a long time was the main supplier of fish to Europe and other countries. The great color diversity of Notobranchius in nature is explained by the fact that the fish live mostly in hard-to-reach places in small isolated reservoirs, forming local populations that differ in color.

A typical biotope of Notobranchius is a small, non-flowing body of water. Usually, this is just a puddle or ditch in the floodplain of the river, which has no connection with it and is filled with water only during the rainy season.

The bottom of the reservoirs is a loose silty-sandy substrate with a large amount of organic matter, due to which the water is rich in humic substances and has an acidic reaction.

Such reservoirs are often attracted by a large number of animals, which not only quench their thirst but also cool in the water. As a result, the content of nitrogenous compounds exceeds all permissible norms, however, Notobranchius live and reproduce even in such extreme conditions.

It is allowed to keep several males, but in order to reduce intraspecific aggression, there should be enough shelter in the aquarium. Fish prefer to swim in the lower layers of the aquarium. 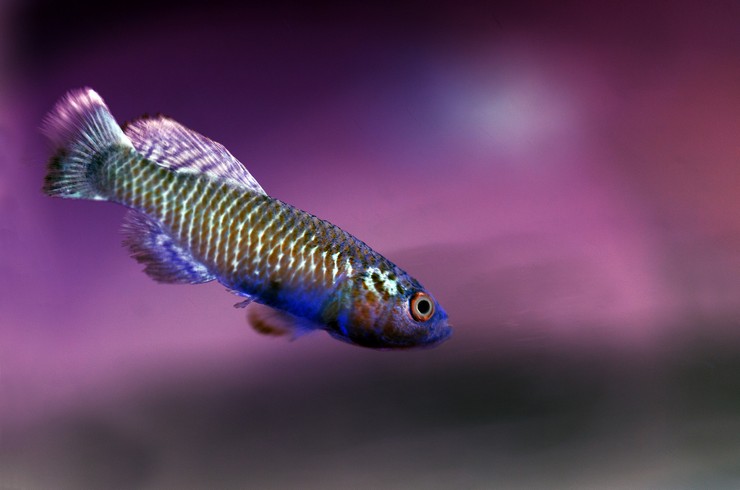 It can be kept in aquariums from 50 liters, water is required soft, its level should not exceed 25 cm. It is advisable to install a large number of shelters. 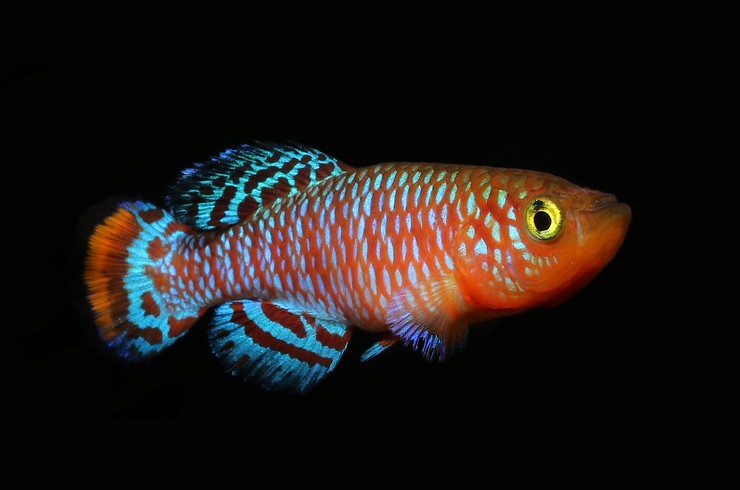 Notbranchius – fish is quite unpretentious to the conditions of detention. Keeping a small group of these killifish doesn’t require a large aquarium. For a group of a male and a pair of females, 40 liters will be enough. Dark sand or small pebbles are used as soil. Natural driftwood and stones will become a reliable shelter. Notbranchius do not like bright light, so it is better to dim it with the help of plants floating on the surface. Of other plants, it is better to choose shade-tolerant species: Javanese moss, microsorium fern, some types of Cryptocoryne.

The aquarium should be equipped with a filter, but a strong current, to which the fish are not accustomed, should not be created.

Serious attention should be paid to water quality. Ideally, it should be very soft, but practice shows that fish adapt well to life in harder water.

The water temperature in the aquarium should not go far beyond the above limits: at lower values, males lose their bright color, and higher values shorten their life.

Caring for Notobranchius is no different from caring for other fish. Regular water changes up to 30% of the aquarium volume are required.

The ideal option for keeping Notobranchius is a species aquarium with one male and 3-4 females. Keeping several males is allowed, but in this case, skirmishes cannot be avoided. You will be able to regularly observe how the males, inflating their gills, approach each other, after which they unfurl their fins and imitate their blows. Sometimes the fish interlock with their jaws during the fight. But usually, these skirmishes do not cause any serious damage. 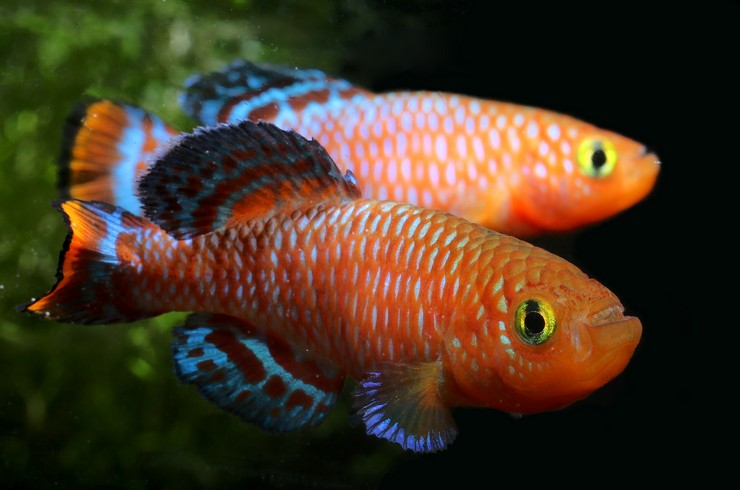 Other killifish, small tetras, rasbora, etc. are well suited as neighbors in a common aquarium. You should not add Notobranchius to fish with veil fins, nimble killifish will not mind biting them at all.

In nature, Notobranchiuses eat numerous insects and their larvae that fall to the surface of the water. A more comfortable grip of food is facilitated by an upward mouth. When kept in an aquarium, many people practice feeding Notobranchius with live and frozen food. However, they do not fully provide the fish with nutrients, and they can also be potential sources of infection.

Therefore, the ideal choice for feeding fish will be high-quality dry food, completely devoid of the disadvantages of living and frozen. The most suitable form of food would be flakes and chips floating on the surface:

Due to active metabolism, Notobranchius should not be left without food, even for several days. It is best to feed them twice a day in small portions, which the fish will eat completely in a couple of minutes.

Breeding of Notobranchius has some peculiarities and therefore requires more thorough preparation. Sexual dimorphism in fish is pronounced, there are usually no problems with the selection of producers. Spawning can occur both in the general aquarium and in a separate spawning tank. In the second case, two weeks before the expected date, the male and the female are seated and actively fed. 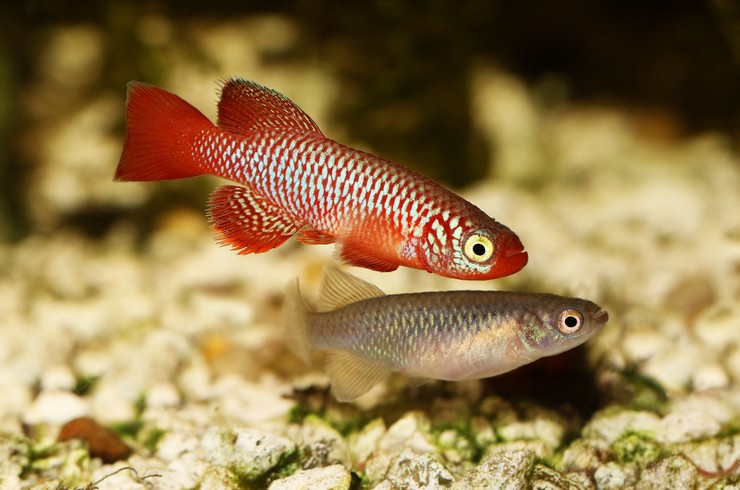 A spawning aquarium should be at least 30 cm long. Neutral peat is laid at the bottom, the water level does not exceed 10 cm. Females spawn in peat, after which it must be carefully removed together with eggs every three weeks, dried, and carefully folded into a jar. The moisture content of the peat should be moderate. The eggs are periodically checked and the dead are removed. The development of eggs takes from one month to six months. You can determine the readiness of caviar by examining it under a magnifying glass. If the eyes of the embryos have a silvery tint, then the peat, along with the eggs, is transferred to the aquarium with water, the level of which should not exceed 3 cm.

The incubation time depends on external conditions. Caviar develops faster at a temperature of 28-30 ° C. The fry grows unevenly and must be sorted regularly.