The Pit Bull is an American fighting dog breed with English roots and rich history. For a long time, these dogs were bred exclusively for victories in bloody sports, which is why many are perceived as aggressive and uncontrollable dogs. Today they are more versatile and sporty. Pit Bulls are famous for their strength, fearlessness, and confidence, they are really difficult to educate, but in the hands of an experienced, strong character of the owner, they will become reliable and loyal companions. 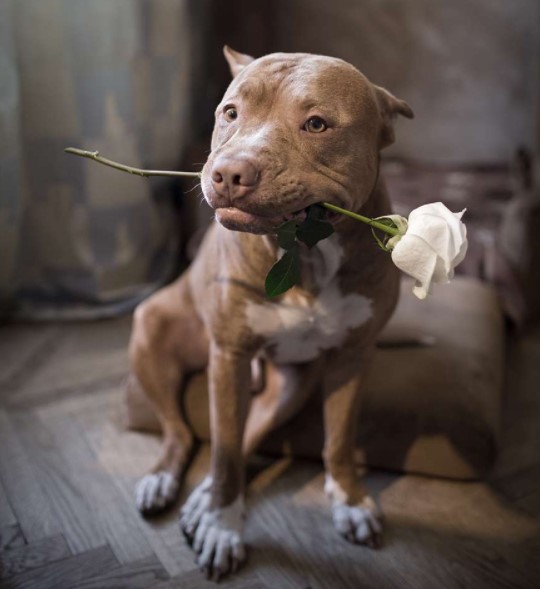 Pit Bulls have a rich past that goes back over 300 years. Bulldogs and Terriers were first actively crossed in the UK for use in combat. Which breeds were involved in breeding work is a topic for numerous discussions, but apparently, they were different in each region. Together with the colonialists from the Old World, the dogs came to America, where they found a new homeland. The name American Pit Bull Terrier has come into use since 1898, until that moment, dogs were called Pit Dogs, Bulldogs, or Pit Terriers.

In America, the breed has always been loved and deservedly so, but after the ban on dogfighting, there were people who wanted to cash in on illegal sports and continued to use mainly Pit Bulls for this. As a result, organized a whole campaign, which turned into a “witch war” and swept the country. Black times have come for the breed. Fortunately, common sense prevailed, people realized that in cases of a dog attacking people, one can only blame the owner, whom the animal seeks to please in every possible way. The breed’s badly damaged reputation has begun to gradually recover, but in a number of countries, including some states in the United States, the distribution and maintenance of Pit Bulls are still subject to severe restrictions.

The pedigree book of American Pit Bull Terriers has been kept since 1898 in the UKC (United Kennel Klub). This association was organized by the breeder Chauncey Z. Bennett, it was supposed to become the main register of working dogs, including fighting dogs, and was conceived as an alternative to the only active at that time – AKC (American Kennel Klub), which was more interested in breeding by appearance. Bennett gave the breed its official name – American Pit Bull Terrier, and the first registered pit bull in the book was his male named Ring. 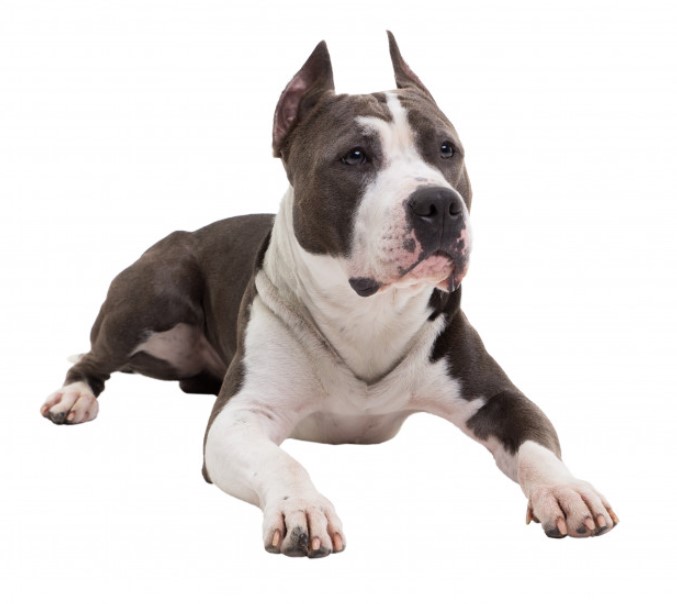 The American Pit Bull Terrier is a powerful, athletic, medium-sized dog with smoothly contoured, well-developed muscles. The preferred weight is 16-28 kg for males, 14-23 kg for females. But for a Pit Bull, it is not the exact correspondence with the numbers that are important, but the correct body proportions and good condition.

The unique head of the Pit Bull is considered a key element, it gives the dog a sense of strength, but is not disproportionate. The head is wide and large; seen from the front, it has the shape of a blunt wide wedge. Seen from the side, the topline of the skull and muzzle are parallel and connected by a moderate stop.

The muzzle is wide, tapering slightly towards the nose. The jaw is wide and deep. The lips fit tightly. Nose with wide-open nostrils, large. The pigmentation can be different. Complete teeth with a correct bite. The eyes are medium in size, round or almond-shaped, set wide apart. Any color is allowed, except blue and heterochromia. The ears are set high and can be cropped. Uncropped ones should be semi-erect, folded in the shape of a rose. The neck is of medium length, with a slight curvature at the nape.

The body length is slightly greater than the height, the females are of an even more stretched format. The length of the forelimbs is approximately 1/2 of the height. The chest is wide, but the width should not exceed the length. The back is strong and firm. The topline slopes slightly from the withers to the flat, broad back. The loin is slightly arched and the croup is moderately sloping. The limbs are strong, muscular, set fairly wide apart. The feet are round with curved toes. The tail is a natural continuation of the topline, tapering smoothly towards the tip. In a relaxed state, it is carried low and reaches the hock joint. When moving, it rises above the line of the back, in an excited state it can rise up, but should not be thrown over the back in a ring.

The coat is short, dense, and shiny, the hair is smooth, moderately hard to the touch, there is no undercoat. Color: any shade or combination with the exception of merle.

The merle (marble) color appeared in the breed many years ago as a result of crosses with other breeds, such as the Leopard Dog. Crossbreeding was aimed at improving the quality, and as a result, the Pit Bulls got into a lot of problems. The color is prohibited in the breed since the presence of merle is associated with the risk of developing a number of ophthalmological and ear diseases, as well as psychological, neurological, immunological, and other health problems. 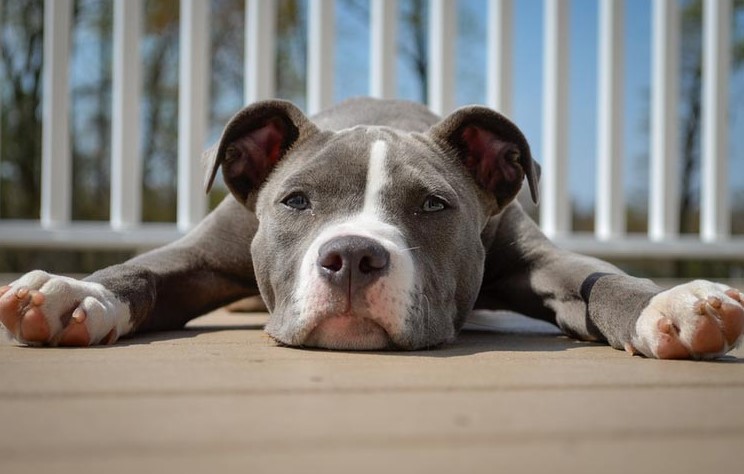 Pit Bull temperament is perhaps the most important aspect of the breed. The standard tells us that the inherent characteristics of a dog are self-confidence, strength, interest in life. And indeed, Pit Bulls move lively and fervently, with a confident posture, with all their appearance they express their readiness for new and exciting exploits. Pit Bulls are interested in what is happening and are friendly, in no case should they feel fear or aggression towards a people.

Modern trends in the breeding and sale of Pit Bulls are associated with the presentation of this breed not as an athlete and fighter, but as a companion, nanny, but the American Pit Bull Terrier is not. This is not a soft plush toy, the content of which can be compared with the content of a decorative dog. Pitbull is a dogfighter, capable of going through any test despite psychological physical fatigue or trauma. A dog that loves to win, hardy, courageous, strong, and intelligent. These are the qualities that the modern American Pit Bull Terrier should have, they have been carefully honed by breeders over many generations. The hallmark that makes a Pit Bull a Pit Bull is self-confidence. Quietly dozing on the owner’s lap, in a minute he will go to attack a bear or lion with full dedication.
We can say that the character of a Pit Bull is largely created by the owner and the environment in which the puppy grows up, which is why so often you can hear opposite opinions about their temperament. Of course, breeders also play a significant role in this, choosing dogs with certain characteristics, in particular by temperament, for breeding. Some adhere more to the ADBA standard, while others believe that the Pit Bull should become a family dog ​​in the near future. 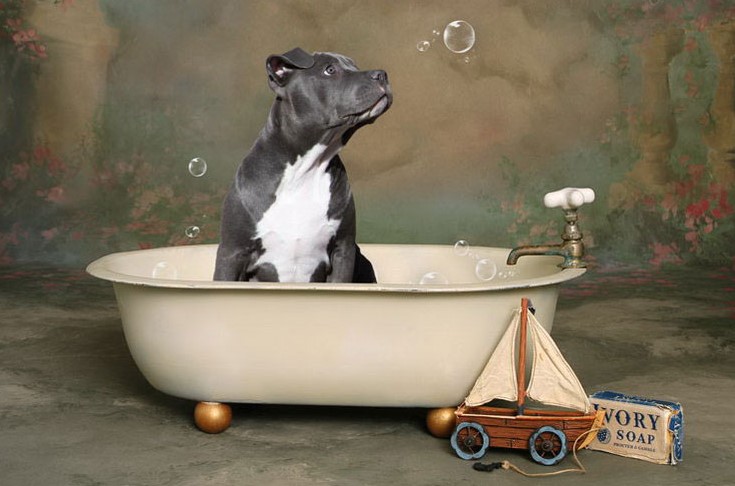 Care the dog is simple, the molt is average, most pronounced in the off-season. Brushing the dog with a brush or a special shorthaired mitt is recommended once a week. After walking in dirty weather, the wool can be wiped off with a damp cloth, bathing the dog no more than once every two months. Use shampoos for short-haired breeds.

The ears are regularly examined for contamination and cleaned as needed. The eyes also need to be kept clean by removing the secretion that has accumulated in the corners. The dog will not have to trim the claws if it grinds them off on its own during walks. Otherwise, the length is removed with scissors-sectors of a suitable size. To prevent plaque and calculus, teeth can be cleaned with a paste 1-2 times a week, or you can give your pet special toys and treats that help cleanse the tooth enamel. 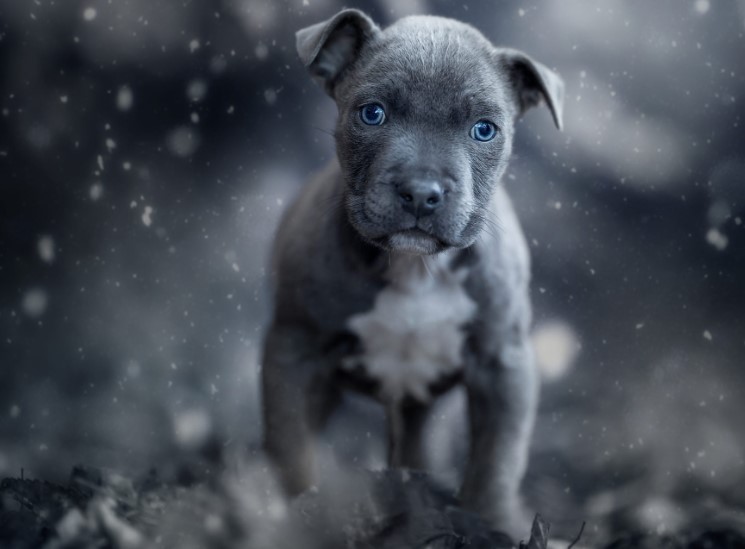 Representatives of the breed, as a rule, are distinguished by good health, they are strong and hardy, their life expectancy is usually 10-12 years.

A number of genetic diseases are distinguished in the breed: