The Staffordshire Bull Terrier was bred with the qualities of a brave and strong fighter, but later the breed underwent changes that were aimed at making the dog an excellent companion and loyal friend. This is one of the few breeds that have a mark of exceptional loyalty to children in the standard. In Sweden, Bull Terriers were actively involved in agility. Country of origin – Great Britain. 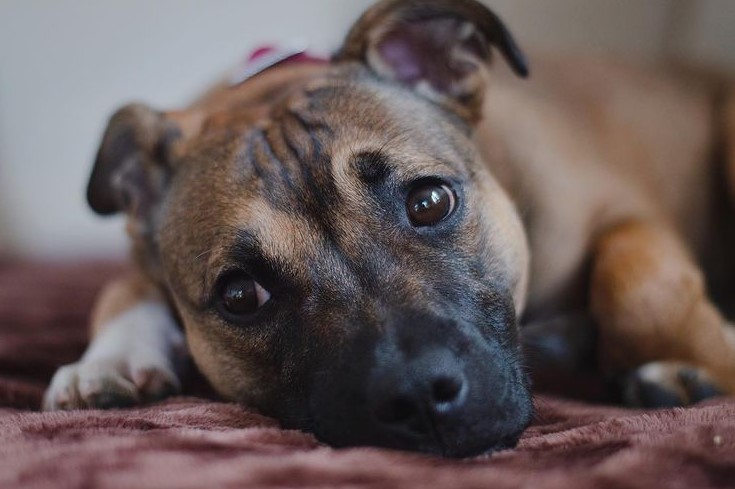 There are historical mentions that dogs of this breed existed in ancient times. The modern Staffordshire Terrier was first recorded in England, in Staffordshire in the 16th century. In the representatives of the breed, the blood of the Old English Mastiff and Bulldog flows. In the name “bull terrier” there is a mention of bulls. This happened because of the nature of the dog. She is considered one of the most fearless and was used for amusement to bait angry bulls.

At the initial stage of selection, piebald Bulldog breeds were the most popular. In modern Bulldogs, this color has been preserved, while in Bull Terriers it has passed to brindle. The first breeder of English Staffordshire Bull Terriers is the Duke of Hamilton. His goal was to breed a hardy and fearless fighting dog. Over time, dog fights began to take place on a regular basis, and the Stafford were the main participants. In the late nineteenth century, dogs of this breed were also used to catch rats and other small rodents. As entertainment, rat-catching competitions were then organized. For quite a long time, all dogs that were used to bait other animals were called in one word – “Bulldog”. The Staffordshire Bull Terrier had a significant difference from all Bulldogs – its forehead was not so massive and wide.

Lovers of this breed of dogs first created and registered their own club in 1935. A year later, the breeders held their first show. Officially, the English Staffordshire Bull Terrier was registered as a breed only in 1939 by the English Kennel Club. The dog is considered an excellent companion. Breeders consider friendliness and loyalty to be the main character traits of the animal, and all aggressive fighting qualities are a thing of the past.

In 1974, an official breed standard appeared, and a clear division of the English and American Staffordshire Bull Terrier into two separate breeds. The American is taller, has an average weight of about 10 kg more, and has cropped ears. The English Staffordshire Terrier became a real pet and an excellent companion, and in 2006 it won the status of the best family pet. Today, the popularity of this dog in England, as well as throughout the world, is constantly growing. 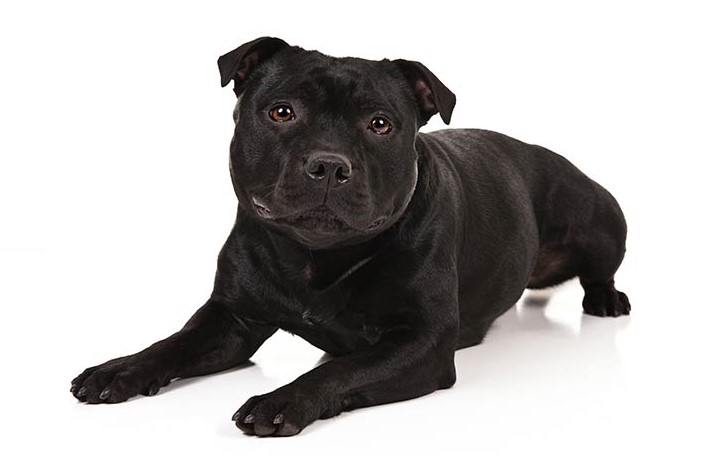 There are two different breeds: English and American Staffordshire Bull Terriers. An English Staffordshire Bull Terrier must meet FCI standards, which describe him as a lean, robust, graceful, and proportionate animal. The only thing is that the paws on such a strong body look a little short, which is also the breed standard. Dogs look very massive with well-developed muscle relief. Males are usually larger than females.

The average height of the Staffordshire Bull Terrier at the withers ranges from 35 to 40 cm. The average weight of a dog is 17.3 kg, that of a female is 15.4 kg. The coat of the English Staffordshire Bull Terrier is short and harsh. The skin is thick. The coat and skin protect the dog well from the opponent’s fangs in battle. There are standard breed colors that are sometimes combined with white spots:

The pet’s skull is rather short but wide with prominent cheekbones. The nose and lips must always be black, regardless of the color of the animal. The jaws are strong and closed. The ears have a semi-erect. Eyes of medium size are set straight on the muzzle, their color may vary depending on the color of the dog. The neck of the Staffordshire Terrier is powerful and short, smoothly merging into the body. The skin is dense and thick, there are no wrinkles at the withers. The loin is massive, the chest is wide, the ribs are rounded. Feet strong, short, parallel. 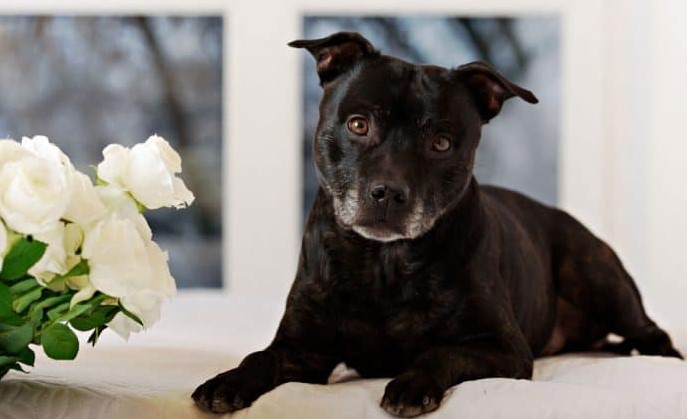 Breeders love these dogs for their high dignity in behavior: unnecessarily, the animal never shows aggression and does not bark. At the same time, the Staff is always ready to protect their master and join the battle. Despite its harsh appearance, the Staffordshire Bull Terrier loves affection and active games. In education, he must be kept in strictness and limitations. A spoiled animal, in an unpredictable situation, may not obey the owner and show aggression towards other animals or a person who does not like it. If the Staff is properly educated, then he unquestioningly obeys the commands of the owner. The dog can make an excellent company for children, takes part in long active walks and games with pleasure. Long-term selection made it possible to breed modern representatives of the breed as intelligent, judicious, easily trained, without unnecessary aggression. The Staff studies a stranger or animal with caution but does not show malice. Despite its strong character, this breed of dogs obeys the will of the owner.

A properly training Staffordshire Bull Terrier will never attack first, but a clear threat to the owner can quickly throw the dog off balance. In a relationship with a person or another dog, strives for leadership. Often he conflicts with the male he lives with in order to take a dominant position in the “pack”. From an early age, a puppy needs to be socialized and educated, not to encourage manifestations of intemperance. Only under such conditions, the Staff becomes an excellent companion, both for humans and for other pets. 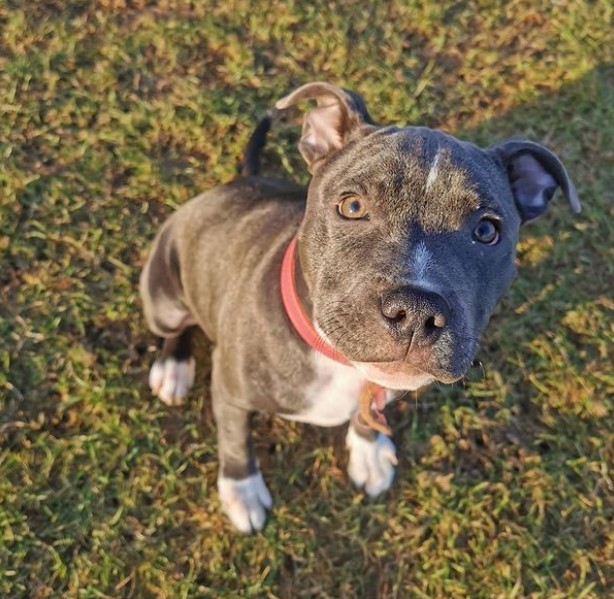 Caring for Staffordshire is quite simple and does not require special knowledge. As with any breed, you should monitor your pet’s coat, claws, teeth, eyes, ears, and physical condition. At first, it seems that it is not easy, but in fact, the Staff is unpretentious in care.

The dog always has a very good appetite, and he can eat absolutely any food. Therefore, first of all, you should take care of his physical condition. It is important not to overfeed the dog, to provide it with uniform physical activity and sufficient activity. Outdoor games provide uniform development of muscles and the formation of a beautiful body. After active exercises, a specific dog smell appears. You can fight it by wiping the dog with a damp towel, napkins, or brushing it out with a thick brush. Care of the Staff’s coat is quite simple. You need to get a soft, thick brush and periodically comb out dying hairs of wool. So the skin is cleansed, and young hairs appear in the place of the old wool.

It is important to keep your pet’s ears clean. To clean the ears from the appearing dark plaque should be a dry cotton pad or swab, without using force. It is strictly forbidden to use cotton swabs. Unexpected turning of your pet’s head can cause injury to your dog’s hearing system and even loss of hearing. Keep your eyes dry and clean at all times. They should also be wiped with a dry cotton pad.

Caring for your nails is to keep track of their length. Usually, dogs that walk a lot, especially in urban asphalt conditions, grind their nails on their own. If they began to bend inward, and the dog began to bang its claws on the floor, then using a special tool they should be shortened. If it does not work out on your own, then you can contact the services of a specialist so as not to injure the fingers of the animal. 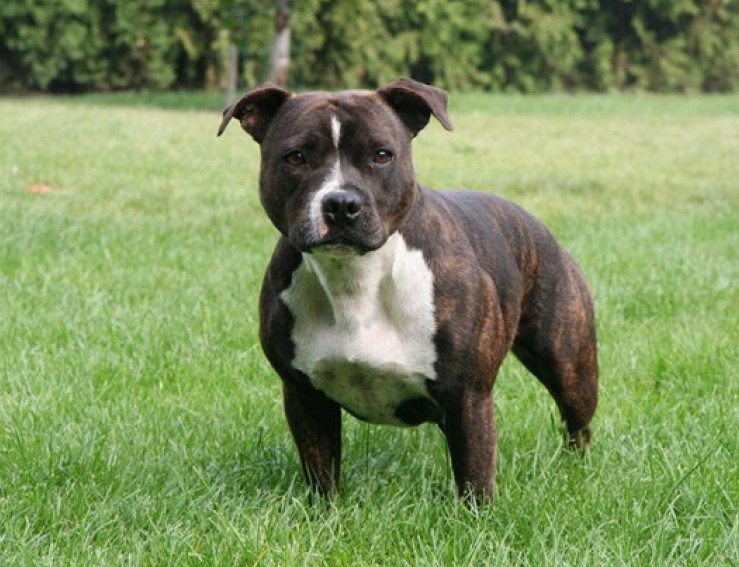 The Staffordshire Bull Terrier is not prone to certain types of disease. Like other breeds, these dogs face the following health problems:

It is important to periodically carry out prophylaxis of the dog against worms.