Ragdoll is an amazing breed of cats, the main feature of which is the ability to muscle relaxation. A cat of this breed takes any position, spreading in the hands of the owner. Translated “Ragdoll” means “rag doll”, which best describes the breed.

Ragdolls have a slightly reduced muscle tone, therefore, when falling, they do not group and do not land on their paws. This also affects the threshold of sensitivity: in representatives of the Ragdoll breed, it is lower than in other cats. Besides, they have an unusually calm and patient character, somewhat similar to the temperament of the Persians. 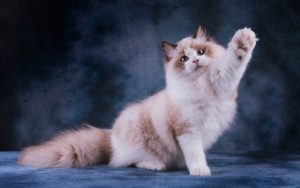 Ragdolls are the favorites of children. Thanks to their equanimity, cats allow them to hug and kiss themselves, swaddle, dress up and generally do whatever they want. Ragdolls play with pleasure, but they are not imposed and do not require constant attention.

The Ragdoll breed itself originated in the USA, in California in the 1960s. The history of the appearance of this type of cat is shrouded in a whole legend.

It is believed that an American named Anna Baker had an Angora cat named Josephine, but tragedy struck. Anna’s cat had an accident. After the incident, the animal managed to survive, but the owner began to notice strange features behind her pet. The cat became less playful and calmer, although before this incident she liked to play actively. Any cat’s aggressiveness was minimized. Muscle tone and pain threshold also decreased.

Anna liked the cat’s docile nature and softness. She decided to cross her cat and a Burmese cat, which has always been distinguished by a balanced and melancholic character. As a result, kittens were born that can take almost any posture and not feel any inconvenience at the same time. Calmness and calmness were passed on to the kittens from the Burmese dad.

Ragdoll is one of the largest domestic cats. Adult ragdoll cats can weigh up to 12 kg and grow up to 1 meter in length. Females are usually 2-3 lighter than males.

This breed is delightfully beautiful, the standard speaks for itself: 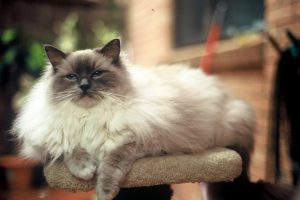 By selection, 3 varieties of ragdolls were bred by color type:

Ragdolls have semi-long hair that is not as difficult to care for as the Persians but still needs to be combed daily. Cats don’t like water and should only be washed when necessary.

Feline pets of the Ragdoll breed are very healthy, they do not have a genetic predisposition to any diseases.

At birth, kittens are completely white, the spots show through slowly. To see the real color, you need to wait about two years. Acceptable colors for ragdoll markings are the seal (black), blue, purple, and chocolate. Variants of their location: color-point (dark spots on the legs, tail, and ears), mitted (white bib, jaw, “gloves” on the front legs, “boots” on the back), and two-color, with ears, tail, and “mask” »Dark, the body is lighter, and belly, collar, and legs are white.

Crossbreeding of Ragdolls with cats of other breeds is standard.