Russian blue cats are noble, loyal, calm, not too trusting of strangers, but friendly and affectionate with the owner. They are unobtrusive, do not require attention, and are very gentle if they want to communicate. 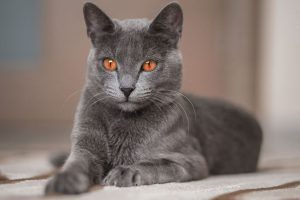 The origin of Russian blue cats is shrouded in legends and secrets. It is believed that representatives of this breed were the favorites of all the monarchs of Europe and Russia.

Already, Peter, I had a fluffy pet – a gray-blue cat, who played the role of the court rat-catcher. The king became so attached to the cat that he ordered his entourage to fulfill any whim of the pet. The pet, in turn, did an excellent job with its simple service.

The daughter of Peter I, Elizaveta Petrovna, ordered to have more cats to fight annoying rodents. So, about 300 fluffy mouse-catchers settled in the royal palace.

Catherine II did not like cat pets, although she realized the value of the amazing Russian blue cat breed. As a result, she endowed the royal families of Europe with fluffy graceful creatures. Besides, English and Dutch sailors, who were often at court, took Russian blue cats to all corners of the world.

Therefore, it is now difficult to judge whether the Russian Blue Cat really appeared in Russia. Undoubtedly, the main feature – a soft bluish coat with a thick undercoat – was introduced into the breed by cats from the northern regions of Russia. But the northern mousetraps differed from their tribal counterparts in their strong build, stocky build, round yellow eyes, and short legs.

Where does the Russian blue have such a graceful physique? It is believed that high paws, large erect ears, and light green almond-shaped eyes give blue Russians a Maltese or Spanish origin. However, in southern cats, the coat is much less rich.

The first documentary records state that Russian blue cats descend from two animals brought to Great Britain by the breeder Carew-Cox from Arkhangelsk in 1893. In 1903, in one of the English books, this breed was recorded as the Arkhangelsk blue.

The Russian blue cat received its modern name in 1935. At the same time, breed standards appeared.

In the XX century, during the wars, the breed was almost lost. For the sake of its preservation, breeders crossed animals with Siamese cats. However, nothing good came of it. Therefore, in the 50-60s. active work began to restore the original appearance of the animals. In the 70s. the breed has been completely restored. 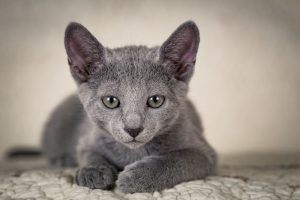 Caring for cats of this breed is simple. Russian blue cats do not tend to genetic diseases. They are distinguished by good health and with good care, they live long enough.

The claws should be trimmed twice a month for the kitten and once for the adult, but not too short, so as not to touch the blood vessel inside the claw. The operation is painless but associated with the infringement of the freedom of the cat. No need to pay attention to her displeasure. It is essential to trim your nails before a show or visit the vet.

The ears of fluffy pets must be cleaned two to three times a month with an ordinary cotton swab. Cats get genuine pleasure from this operation (unless, of course, they dig too deeply).

The Russian blue cat is capable of taking care of its fur independently and fully from early childhood. It is necessary to bathe pets in cases of severe pollution (for example, when they were brought from a summer cottage) or a week before the exhibition. For normal washing, any mild shampoo will do, and before the show use a show shampoo and an appropriate conditioner.

To make Russian blue wool look perfectly well-groomed, it is recommended to periodically smooth it with a natural bristle brush. This allows not only to remove fallen hairs but also to make a light massage that stimulates hair growth. Cats like this procedure to such an extent that they can cling to your hand from an excess of feelings (“love bite”). Punishing a cat is unacceptable!

Anthelminthic prophylaxis in spring and autumn, as well as annual vaccination, are mandatory regardless of the conditions in which the cat is kept. If you have plans to travel with your cat abroad or to participate in exhibitions, do not forget about the following vaccines: Ask your veterinarian to issue an international veterinary passport for the animal. 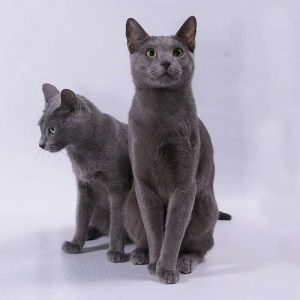 Eating a Russian blue does not present any difficulties – these cats are not whimsical. Every experienced breeder will recommend using only professional Super Premium dry food. According to them, it will cost you less than treatment resulting from the use of substandard or falsified feed.

If you are a supporter of “natural food”, there are a few simple rules to remember – cats cannot be spicy, salty, and oily. From meat, beef, turkey, and offal are preferable, only sea fish is acceptable. Any fermented milk products will only benefit.

There are sprouted cereals (oats, wheat) and not only for pets – this is not a whim, but a benefit for your furry friend. Firstly, greens contain many vitamins and minerals, and, secondly, the blades of grass swallowed by a cat help to free the stomach from hairballs that accumulate there as a result of licking (grooming).

With “natural nutrition”, one should not forget about vitamin and mineral supplements (on the recommendation of the breeder or veterinarian). As a rule, cats perceive vitamins as a treat, so the daily “distribution” can be hailed as a reward for good behavior (or deed), which is very important for educational purposes.

Your blue cat’s water should always be clean and fresh. It is undesirable to give the cat milk – it “weakens”. Oftentimes, cats prefer to drink from the tap – nothing to worry about if the water is really clean. In general, the bathroom is one of the favorite places for feline games: from the cruelest to the serenely contemplative.

Defects of the Russian blue breed of cats are considered to be creases on the tail, deformities of the spine, the curvature of the jaw, strabismus, polydactyly, or, on the contrary, an insufficient number of toes, spots on the coat.

Crossbreeding with other breeds is currently prohibited by the standard.