This cute shaggy shepherd boy was bred in Belgium at the beginning of the 18th century in order to graze cattle and protect the economy of the Ardennes farmers. The ancestors of the Ardennes Bouvier are local dog breeds, some of which no longer exist – for example, Bouvier Ruler, Morman, and Paré. By the way, “Bouvier” in translation from the Flemish language means “cattle driver”. During the First World War, these four-legged friends of man were retrained into messengers and medical orderlies, thanks to which they earned great respect and honor among their compatriots. Unfortunately, almost all representatives of this breed were destroyed by a brutal war, however, by the forces of fans of the Ardennes Bouvier, who were looking for dogs similar to him throughout Belgium, the breed was restored and actually found a second wind. In 1963, the breed standard was approved in Belgium, and the Bouvier Ardennes was recognized by the International Cynological Association in 2006. 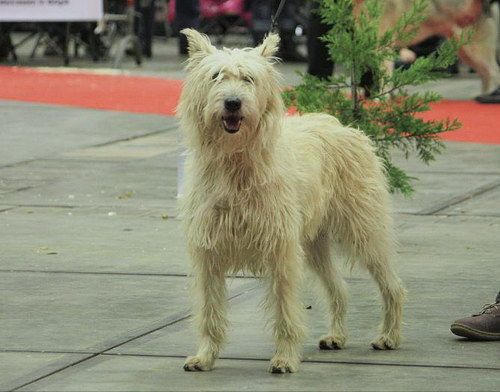 Today, the breed is quite rare in its homeland (and what can we say about other countries), since the number of farms has sharply decreased and the need to use dogs for work has disappeared. However, there are still picturesque corners of Flanders, untouched by modern technological progress, where these hardy and hardworking creatures still obediently perform their shepherd duties. And some of the Ardennes Bouviers changed their specialization and successfully work in the police. The Ardennes Bouvier is a medium-sized dog, it has a height at the withers from 50 to 64 cm, weight – from 18 to 25 kg. She has a fairly large head with a short snout, mustache, and beard made of wool, large erect or semi-erect ears, dark eyes, and a short tail, which is usually docked to the first vertebra. By the way, many puppies of the Ardennes Bouvier are born completely tailless. The color of the breed can be very diverse, there are no strict standards on this matter since during breeding, the external data of this dog was practically not paid attention to, working qualities were always in the first place. Keep in mind that Ardennes Bouviers often have bowel problems (bloating), which is why they can sometimes smell unpleasant. Outwardly, the Ardennes Bouvier may seem harsh and unsociable, and, indeed, there is something similar in his character. This serious dog is wary of strangers, and can even show aggression towards other people’s dogs. But at the same time, he adores his master and is ready to spend twenty-four hours a day with him, and being alone he is terribly sad. The Ardennes Bouvier is serious and brooding. He is endowed with a high IQ, which helps in his quick and easy training. It is better to keep him in a country house since this creature needs space and freedom of movement. In general, he can live in the yard at any time of the year, since his coarse wool cover (about 5 cm long), coupled with a soft undercoat that appears in winter, allows the dog to stay warm even in severe frosts. One of the peculiarities of this breed is its love of playing in the water, and besides, it simply adores wallowing in liquid mud – so be prepared for the fact that you will have to wash your pet after each such reception of “mud baths”.