The scalars are incredibly beautiful fish and the decoration of any tropical aquarium. They are graceful, majestic, and can stand up for themselves. Therefore, the owners of these cichlids have no, no, and the thought of propagating the scalar at home jumps over. This is not to say that it is very easy to get offspring from scalars, but with a little patience, you can achieve a positive experience in this matter.

If a pair of scalar live in your aquarium, then at one point you may find on a plant leaf, filter, or glass a large number of small eggs, near which your cichlids will scurry about, not letting anyone close to the clutch. Unfortunately, in a general aquarium, the chance of getting offspring from these eggs is very small. Most likely, the eggs will be eaten by the neighbors in the aquarium, and sometimes by the parents themselves. Therefore, breeding scalars in a common aquarium is an idea, most likely doomed to failure.

Sexual maturity in scalars occurs at the age of about one year. It is quite difficult to independently form pairs of producers because sexual dimorphism in scalars is very weak. Most often they do the following: they acquire 6-8 young scalars and wait until the fish themselves form pairs.

Unlike much other fish, the scalar should not be kept separately before spawning. This is due to the fact that the maturation of reproductive products in the male occurs only in the presence of the female. 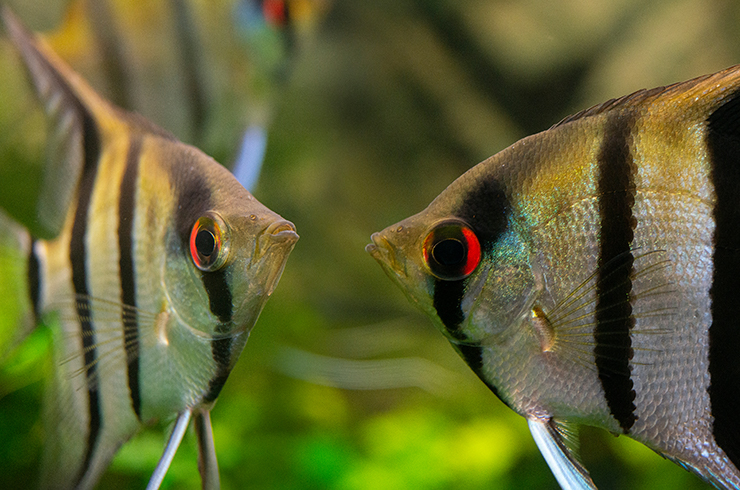 To obtain maximum offspring, a separate spawning tank should be prepared – an aquarium with a volume of 70-100 liters. The soil should not be laid in it, but it will be necessary to organize places where caviar can be deposited. Most often, this role is played by plants with wide leaves, flat stones, plastic plates, etc. It is necessary to install an aeration system, a small filter, and a thermostat.

Two-thirds of the water is poured into the spawning grounds from the main aquarium, and one-third is better to add osmotic. The pair is then ready for spawning planting. To stimulate this process, the water temperature is raised to 27-28 ° C and daily changes of 15-20% are made. At the same time, soft water is used so that the hardness in the spawning aquarium also decreases. 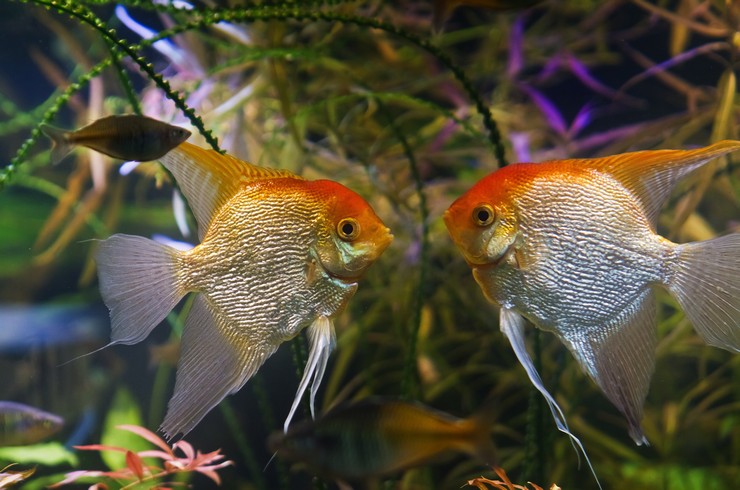 If the conditions are right, then you will soon notice signs of impending spawning: the male will begin to chase the female, and also clear the place where eggs will be laid in the near future.

When everything is ready, the female lays several hundred eggs in the prepared place, which the male immediately fertilizes. This process is lengthy, it can take several hours.

Scalars are fish with a well-developed parental instinct. After the eggs are laid, the newly minted parents take care of the future offspring: with the help of fins, they create a stream of water at the eggs, and the dead eggs are eaten. If spawning occurred in a common aquarium, then the scalars will jealously guard the clutch and drive away any neighbors from it.

But not always “parental feelings” are fully manifested in fish. It is not uncommon for producers to eat their own caviar, although this is rather an exception. However, if you notice an attempt by the scalar to feast on caviar, then it can be carefully collected and, without allowing contact with air, transferred to a separate container, after which you can start breeding it yourself. 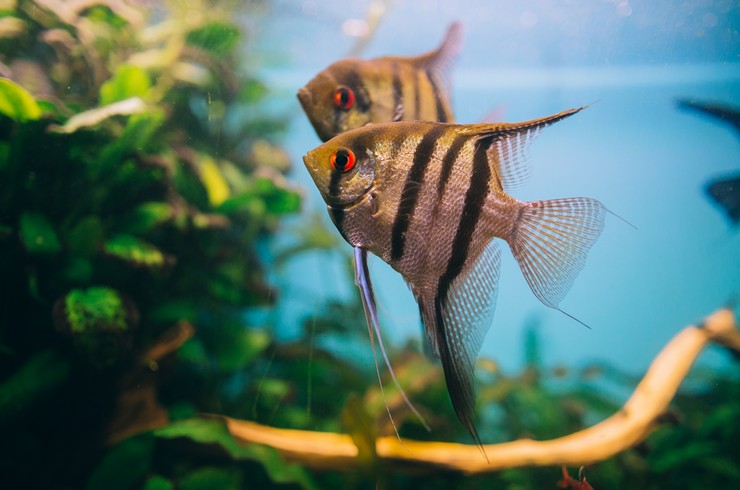 After the spawning process is completed, an antifungal agent must be added to the water to save more eggs. If for some reason you decide to leave the eggs without the attention of the parents, then on the second day after the transfer of the eggs, be sure to carefully remove the dead eggs: they will be white, while the healthy ones will be translucent. 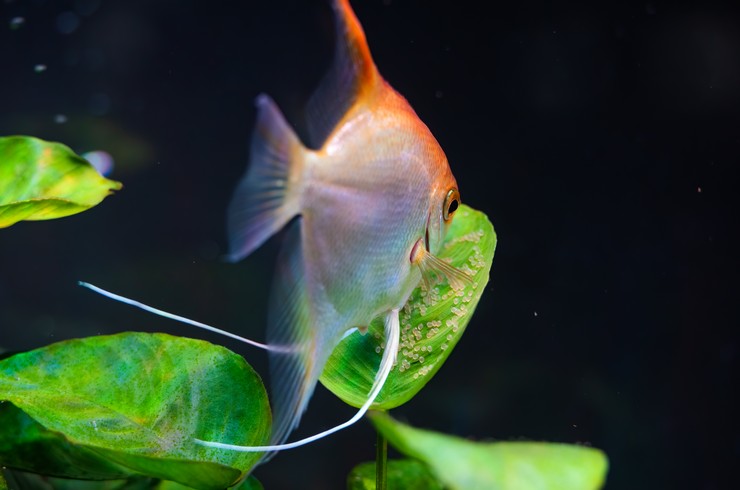 In the worst cases, the eggs completely turn white a couple of hours after spawning. This is most often caused by male sterility or too young/old age of the couple.

The lighting in the spawning aquarium should be around the clock, but the light should not be set too bright.

How to distinguish a female angelfish from a male

One of the main difficulties encountered by inexperienced scalar breeders is determining the sex of a given species. Unfortunately, the sex differences between the male and the female are insignificant. It is almost impossible to determine sex at an early age, but it is worth trying in sexually mature fish. You can pay attention to the following signs:

Determining the sex of scalars by the behavior of fish is not at all so simple. There were cases when, in the absence of a male, two females imitated sexual behavior and even laid eggs, but she, of course, is unfertilized.

It should be borne in mind that scalars are monogamous fish that form very strong pairs. 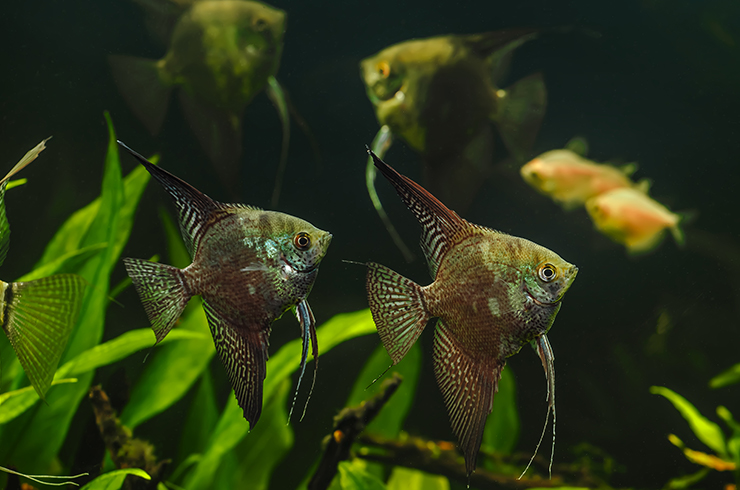 The incubation of scalar eggs lasts about two days, after which the larvae are born. They have tails resembling flagella, which are constantly moved. On the fourth day, you can already distinguish the head and the large yolk sac, which serves as food for the fry in the early stages of development. At this time, you should replace 1/3 of the water in the aquarium with freshwater, similar in temperature and other parameters. 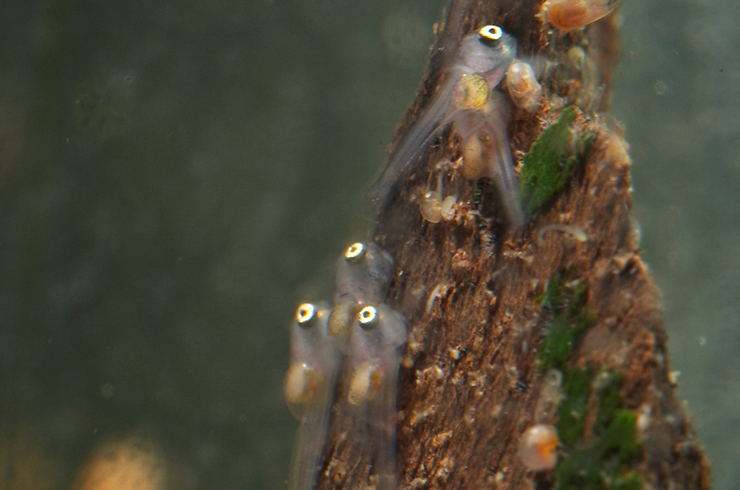 Further, two black spots appear on the head – these are future eyes.

After the supply of nutrients in the yolk sac is exhausted (5-6 days after emergence), the larvae become fry and begin to swim and feed on their own.

Starter feed for scalar fry is Daphnia, Cyclops, Ciliates, Artemia nauplii. It is better to transfer slightly grown-up individuals to high-quality dry food for fry – TetraMin Baby. Fish should be fed often (up to 5-6 times a day). However, make sure that all feed is eaten. If you accidentally give an excessive amount of food, then its remains should be removed with a siphon 5-10 minutes after feeding. As they grow, if there is a lot of fries, they should be planted in different aquariums. Excessive crowding of fish can lead to an outbreak of ammonia and the death of most of the offspring.

The fry begins to take on the characteristic “triangular” shape at the age of about 30-45 days.