In the aquariums of amateurs, you can find a wide variety of mobile fish – barbs. The scarlet barb is rightfully considered one of the most beautiful representatives of the genus.

The scarlet barb (Pethia padamya) is a fish from the carp family, which got its name from the bright and wide scarlet stripe on the side of the males. The edging of each scale and the spots on the fins give the fish a special charm. At the same time, the scarlet barb is the same unpretentious species in content, like its other relatives, and it can be recommended to novice aquarists without any problems. 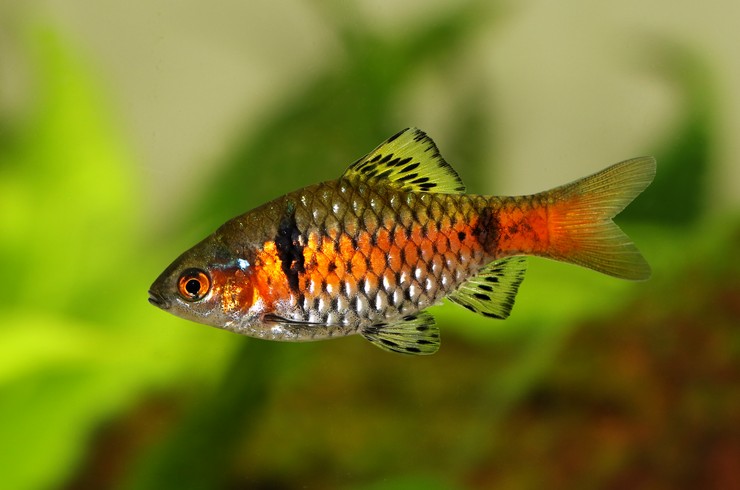 The species received its official status only in 2008, before that it was considered a species of the Barbus tikto (Pethia ticto). The Latin name of the species comes from the Burmese “ruby-colored little fish”. In many catalogs, it is still listed as a ruby, or red, barb. The fish also has one more name – the Odessa Barbus, common in our country. And this is due to the fact that it was through Odessa that the first copies reached the CIS countries.

Considering the peacefulness and bright color of the fish, as well as the ease of keeping and breeding, it will be an excellent decoration for any aquarium.

The scarlet barb is rightfully considered one of the most beautiful representatives of the genus. The size of this fish is small, usually 5-6 cm. The body is oval, flattened at the sides, and covered with dense scales with a pronounced mesh pattern. The main body color is silver with a metallic sheen, the back is greenish-gray, the abdomen is lighter. The caudal fin is red, the rest are transparent with clear black strokes. Dark spots are located behind the operculum and at the base of the tail. 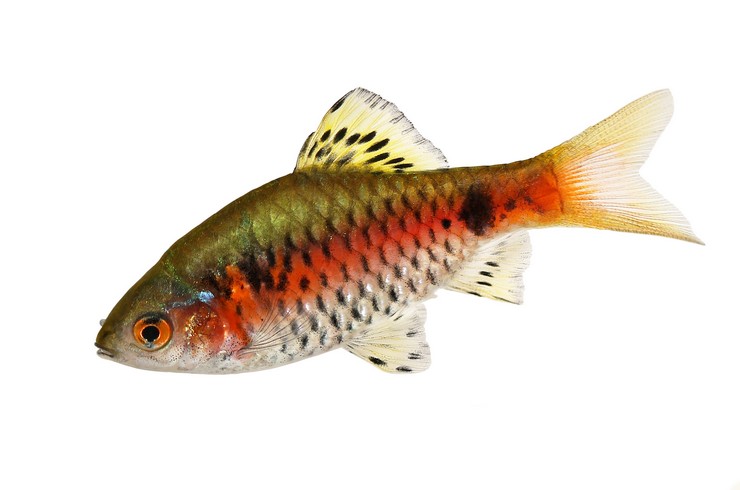 The males of the scarlet Barbus are the brightest. A wide red stripe runs along the sides of the body from the eyes to the tail. It becomes especially bright during the spawning period. Females are much more modestly colored and do not have a bright stripe, but they are larger than males.

Habitat of the red Barbus

The scarlet barb is widespread in the countries of Southeast Asia. It was first discovered in Myanmar, in the Ayeyarwaddy River and its tributaries. However, wild populations are found in India, China, Burma, Laos, Pakistan, Nepal, Bangladesh.

Although the fish is found in the channels of large Asian rivers – the Mekong, Chao Phraya, and others – for the most part, the scarlet barb prefers dams and backwaters of small bodies of water with a silty or pebble bottom and a large amount of aquatic vegetation.

The scarlet barb is a schooling fish; it is recommended to keep at least 6 individuals in the aquarium. Solitary keeping gives barbs discomfort and can provoke aggression or weakening of the immune system due to constant stress. In the flock, all the charm of this fish is revealed, hierarchical connections are established, interesting behavior is observed.

For a small flock, you will need an aquarium of 60 liters or more, it is better if it is extended in length because barbs are very active fish and like to swim quickly. For the same reason, it is better to cover the container with a lid to prevent the fish from jumping out.

It is best to use medium-sized dark pebbles as soil, barbs will look more contrasting on it. The color of fish is best manifested also in conditions of dim lighting and a large number of living plants planted along the back wall. Long-stemmed and small-leaved plants such as Vallisneria, elodea, cryptocoryne, hornwort, ambulia, hygrophila, lemongrass are well suited. It is best to leave the front of the aquarium free so that the fish can frolic there. Any decorations can be used, but it is advisable to use natural stones and driftwood when decorating. 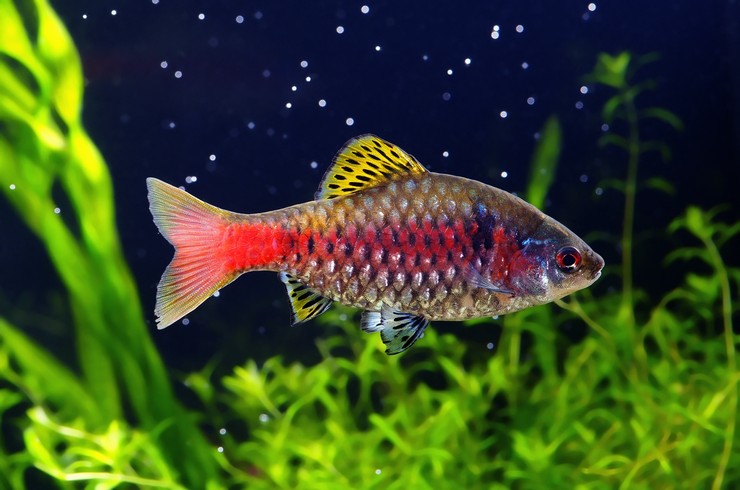 Scarlet barbs love clean and oxygen-rich water, so a proper filter and compressor must be installed in the aquarium. The thermostat is optional equipment because the fish feels great at a temperature of 20-25 ° C. It is recommended to create a moderate current with the help of a filter, the fish love it very much. Change 25-30% of the water in the aquarium once a week.

The scarlet barb is perfect for keeping in common aquariums with other species of fish, as it has a calm character. Ideal neighbors will be, first of all, other types of barbs: Sumatran, mutants, Denison, cherry. You can also organize cohabitation with zebrafish, congo, tetras, swordtails, neons, etc. Barbs also do not pay attention to bottom fish – catfish and loaches – as well as shrimps.

It is not recommended to keep scarlet barbs with slow fish species, as well as with fish that have veil fins. Despite their peacefulness and focus on intraspecific relationships, barbs can sometimes bite off fins.

Of course, you cannot plant barbs with large aggressive species, nimble and bright fish will sooner or later fall prey to predators.

In nature, the diet of the scarlet Barbus is diverse. It includes insects and their larvae, worms, and other small invertebrates. Fish will not give up on the delicate parts of green plants. In an aquarium, barbs willingly eat any kind of food. But do not forget that live and frozen food can become a source of dangerous diseases and do not contain a full range of nutrients, so it is better to give preference to high-quality dry food:

It is necessary to feed the fish several times a day in small portions. It is useful to arrange a fasting day once a week.

Breeding a scarlet Barbus is not the most difficult process. Sex differences in this fish are noticeable: the female is larger, has a less bright color, the scarlet stripe is absent.

Scarlet barbs are spawning fish that do not care about their offspring. To breed them, you will need a small aquarium of 10-15 liters, on the bottom of which you need to put a net and small-leaved plants. The water level should not exceed 15-20 cm. A protective net is necessary to protect the eggs from being eaten by the parents. 8-14 days before spawning, it is better to plant the producers and feed them abundantly. When the female’s abdomen is strongly rounded, spawning should be started, which can be both paired and group (there should be twice as many males). 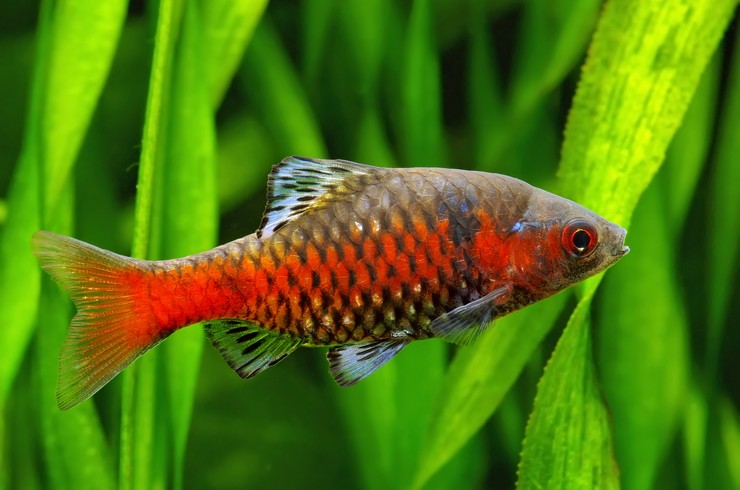 It is better to use aquarium water in the spawning grounds; to stimulate the process, you can raise the water temperature to 25 ° C. It is necessary to arrange weak aeration, which will not interfere with other fish. Caviar of scarlet barbs does not like direct sunlight, so it is better to darken the aquarium.

Spawning usually begins at dawn. After a short courtship ritual, the female lays eggs, and the male fertilizes them. Having fallen outside the separator grid, the eggs become unavailable for eating by newly-made parents. At the end of the process, the producers are returned to the general aquarium. The fertility of one female can be 150-200 eggs. It takes about a day to incubate eggs, and 3-4 days after hatching, the fish are able to feed on their own.