Siam is unusually active, sociable, do not like loneliness, and requires maximum attention. They are very attached to the master and follow him everywhere. These cats are quick-witted, easily understand what is required of them, but can be stubborn. They have a gentle melodic voice and love to “talk”, thereby expressing emotions.

The Siamese cat has a very distinctive appearance, which is characterized by a slender, long, pipe-like body. The head is in the form of a long wedge, large almond-shaped obliquely set eyes of bright blue.

The large ears, wide at the base and pointed at the ends, are set in such a way that an equilateral triangle forms between the nose and the tips of the ears.

The coat of the Siamese cat is short, tight to the body, without an undercoat.

A very long, whip-like tail, thin from the very base with a pointed long tip. 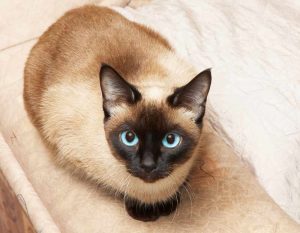 The birthplace of the breed is Siam (modern Thailand). These animals lived in temples and royal families. The first Siamese were brought to Europe in 1884 by the English consul, to whom they were presented by the King of Siam.

In 1902, the first standard was approved, but due to excessive genetic dilution of the breed, Siamese cats practically ceased to comply with it. Modern representatives, bred after the restoration of the breed, look thinner than their predecessors.

Since Siamese is a cross between shorthair and ultra short hair cats, caring for them is easy. They should be brushed out once a week or even less often. Bathe as needed. The presence of a scratching post in the house is required. Siam is a fairly healthy breed, among the congenital defects they have only squint.

Currently, a large number of varieties of Siamese cats have been recorded by coat color. Among them, individuals stand out both with monochrome (black, blue, purple, red, cream, etc.) markings, and with various tortoiseshell, marble, and tabby spots.