Affenpinscher is one of those breeds that they say: “Small, but daring!”. These funny kids are bright and distinctive creatures. In his homeland, in Germany, where the Affenpinscher was bred at the beginning of the 17th century, he gained fame as a clever and fearless rat-catcher (in fact, the breed was bred to catch pest rats). The closest relatives of the Affenpinscher are the Brussels Griffon, Schnauzer, and some terriers. Initially, the Affenpinscher was larger than modern representatives of the breed, but over time the dog became more and more miniature and short-faced. Translated from German, the name of the breed means “monkey pinscher” (“affen” in German means “monkey”, and indeed, the funny face of the Affenpinscher with a protruding chin bears great resemblance to the appearance of human ancestors. 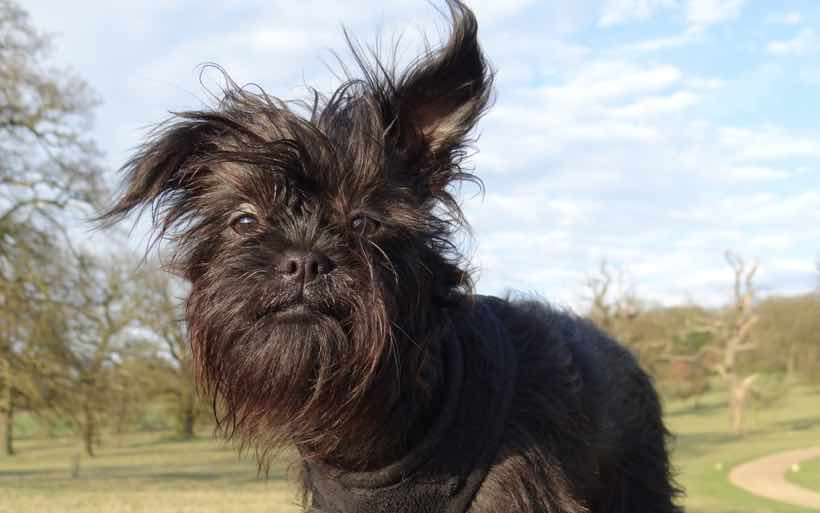 Today, the Affenpinscher is considered a rather rare breed, but he boasts loyal and adoring fans who will not exchange him for any other. This ape-like dog is popular mainly in Germany, Austria, the USA, France. By the way, for his outstanding appearance the French call this baby “mustachioed devil”. Images of Affenpinscher can be found in paintings by world-renowned artists Anton Van Dyck and Albrecht Dürer Externally, the Affenpinscher is a compactly built dog with a square body, a round head, a short muzzle with a protruding lower jaw, a beard with a mustache, and thick eyebrows that cover the eyelids; mischievous and at the same time serious lively black eyes and small, tall about set triangular ears. The height at the withers of an affenpinscher is usually 23 – 27 cm, weight – from 3 to 5 kg. Affennincher’s coat is shaggy, rough, and rough to the touch, with a length of 1.5 to 3 cm, but because of this it does not look rustic or sloppy (of course, with regular grooming). His fur must be combed out 2-3 times a week, otherwise, it will get tangled. On the chest, belly, limbs, muzzle, and neck, the hair is usually longer than on the whole body. The undercoat is soft, fairly dense, and slightly wavy. The most desirable color for this breed is black, dark gray, blue, red, red, black and tan or even tricolor (a combination of red, black and white) are also acceptable. A black mask and small white markings on the chest are acceptable. Affenpinscher simply cannot stand being alone, so he is always where you are. Not a single family gathering can do without this fast pup. And if they accidentally forgot about him, he will be able to attract attention so that you drop everything and rush to play with your demanding pet. He is a real comedian and with one expression on his monkey face, he can make even the most serious person laugh. Affenpinscher is a very smart and cunning dog, so when raising him you will also have to use cunning. He quickly gets bored with the repetition of monotonous commands and tricks, so try to diversify the learning process as much as possible. Try not to make these workouts long and make them fun games rather than boring obedience lessons. This cute baby is an ardent defender of his family: he will meet with loud barking anyone who seems suspicious to him. A sociable affenpinscher can easily make friends with other animals, but by nature, he is an owner and does not like to share his food, toys, and even more so, the attention of his beloved owner with someone. You can easily take your pet on a trip – it usually behaves well on the road and does not bother you and your neighbors. He loves both walking and traveling in any form of transport, where he always becomes the object of increased attention and affectionate glances and exclamations. Affenpinschers are very mobile creatures and love to run, jump and overcome various obstacles (for example, jumping over a fence or climbing a tree). With the appropriate mood, they can chase cats or attack their four-legged brother, which may turn out to be several times larger than himself. For the monkey pinscher, all this is a game – and nothing more, since he is not aggressive at all and will not get involved in a “fight for the sake of a fight”. Without physical activity, this mischievous person becomes capricious and naughty, so try to take interesting walks with him and play outdoor games as often as possible.