The Corded Poodle, contrary to all opinions and beliefs, is not a separate breed or a kind of poodle. Cords are just a way of styling wool, nothing more than a hairstyle.

Corded poodles look impressive, undoubtedly attract attention, but they are quite rare due to the difficulties of grooming the coat and forming it into cords.

The fashion for corded poodles began in the second half of the 19th century. Then at the shows, they were even evaluated separately from the rest of the poodles, but later this approach was recognized as incorrect, since the harness is a way of laying, and there were no other differences between the dogs. Gradually, interest in animals disappeared due to the complexity of care. Indeed, in those days there was no opportunity to keep such a dog clean, it was necessary to smear the harnesses with petroleum jelly and other oils to give them elasticity and proper appearance, as a result, the wool became oily, an unpleasant odor appeared, there were difficulties both with washing and drying the hair. 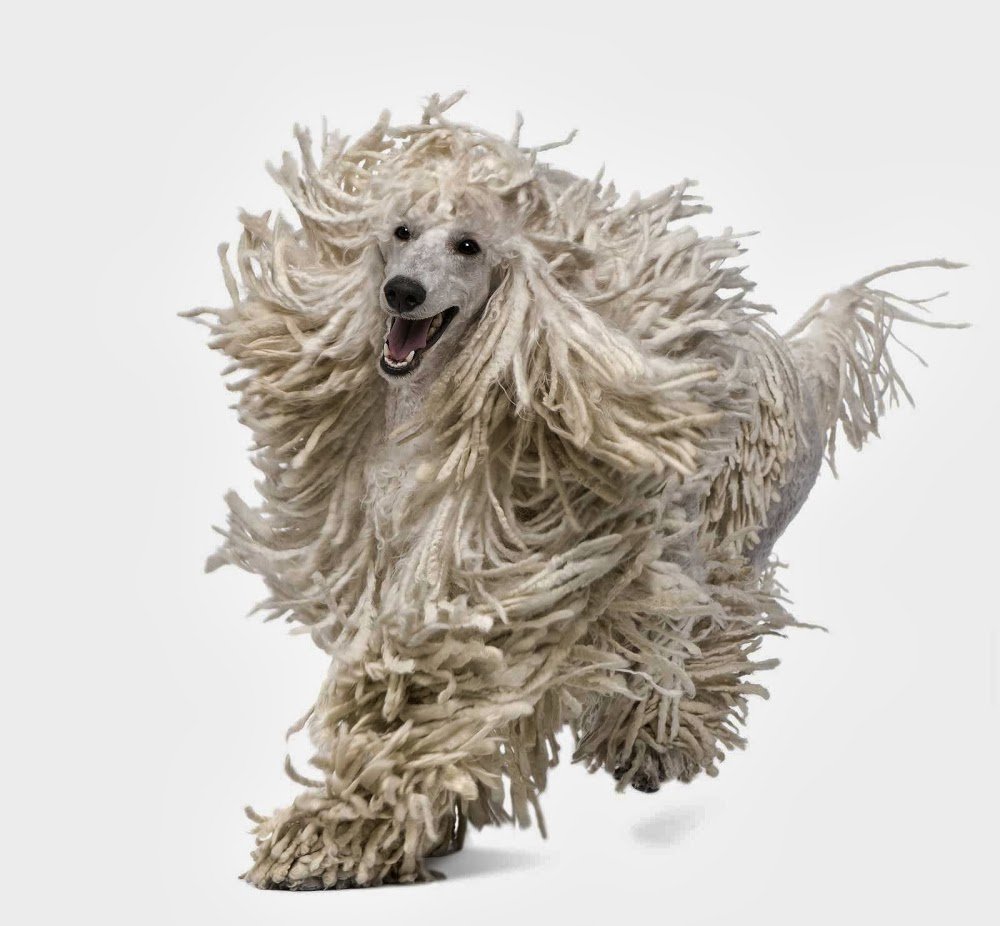 Every Poodle can be made into a Corded Poodle, but it takes time and patience. In addition, the quality of the wool should be taken into account, otherwise, the bundles will turn out to be ugly.

Most often, harnesses are formed on large (royal), less often small poodles. The most successful cords are obtained in white, black, black, and white, less often dark brown poodles, with very fast-growing, elastic guard hair and abundant, not too delicate undercoat. It is possible to create harnesses for poodles and other colors, but dead hair will be clearly visible, which looks dull compared to living, which means that the general appearance of the poodle will not be very attractive. The fur coat turns out to be especially unsuccessful in dogs with slow hair growth and a sparse undercoat.

How to Cord a Poodle Coat

It should be remembered that the process of forming beautiful long cords takes years and requires regular, sometimes many hours of maintenance.

The preparation of the dog begins from puppyhood, carefully combing the coat, especially during the first serious molt at the age of 8-10 months, when the young coat changes to adult. Combing the coat completely stops after its final change to an adult coat.

Immediately before the start of the process, the dog’s hair is shortened on the face, as well as under the tail, around the anus. This is done for hygiene purposes and so that it is not so hard for the dog, since the cords give an additional load.

To set the basis for the formation of beautiful cords, they begin with a thorough combing of the coat, otherwise, the curls will form unevenly. After combing for 2-3 days, the wool is allowed to form into curls, locks. After 2-3 days, the poodle is washed using soap (shaved baby soap, diluted in water) or dog shampoo, which makes the coat heavier and harder. They wash so as not to destroy the already formed strands.

After washing, the wool is gently dried, removing excess moisture with absorbent or regular dry towels. Wool should not be dried with a hairdryer, as it may fluff. Then the poodle is allowed to shake and wrapped in a dry sheet, and on top with a woolen blanket or blanket. The poodle should be in such a wrapped state for about 1-2 hours, after which the final drying is carried out with a weak stream of a hairdryer, keeping it at a distance and directing the air stream in the direction of wool growth. When drying with a hairdryer, you must not lift the wool, fluff it. It is enough to gently touch the curls with your fingers during the drying process. If the procedure for shaping curls takes place in the warm season, then after washing it is not necessary to dry it with a hairdryer, the dog will dry out naturally.

At least once a week, the strands are carefully sorted out, preventing them from tangling together at the base. Each cord should be separated by a parting. Most often, the wool gets tangled and does not form beautiful curls in the area of ​​elbows, limbs, tail, hips, ears. These places should be given more attention. You can disassemble tangled cords using a metal comb, but it is used not for combing, but for separating the strands.

While the cords are just beginning to form, the poodle does not look very attractive, it may even look miserable and unkempt at first glance, but over time the pet will grow a beautiful corded fur coat.

The cords are formed within 1-4 months, depending on the rate of hair growth, but even after all this time, they will not yet acquire the desired density.

The most difficult thing in creating a corded fur coat is the first few months when you need to regularly sort out the strands, make sure that they do not get confused. The harnesses will gradually thicken, and the pet will turn into a real handsome man.

Later, when the cords are finally formed, they are sorted out once a month, carefully separating those that are locked at the base.

Washing the Corded Poodle is part of the maintenance. Water procedures are carried out approximately once every 2-3 months, while the dog is not combed or brushes are used for washing. The most common way to wash Corded Poodles is as follows. Warm water is taken into the bath, baby soap is diluted in it (without soap bars, it is better if a concentrated soap solution filtered through a sieve is prepared in advance) or a special shampoo for dogs. There should not be a lot of soap in the water, otherwise, it will take a long time to wash off the hair.

Then the poodle is placed in the bath for a few minutes (on the back) so that the soap does not get on the face (eyes, mouth). Then the dog is seated in the bathroom and the coat is washed with light massaging movements, after which each strand is thoroughly washed under the shower. After washing, apply a leave-in balm or conditioner to give the tourniquets elasticity. Conditioner can be applied after drying.

After applying the balm, the wool is blotted with a towel and gently dried with a hairdryer, keeping it at a distance of at least 12 cm. During the drying process, the cords are carefully separated from each other, because they usually stick together. Drying with a hairdryer takes up to 8 hours, depending on the length and density of the braids. Drying can be done in other ways, such as placing the poodle in a drying cabinet like the one used in dog parlors or leaving it in a room with a heat fan. It is important that there is no draft during drying, otherwise, a poodle with wet lines may catch a cold.

It is worth noting that the longer and tighter the cords, the longer they dry. Therefore, it can take 2-3 days for the coat to completely dry, subject to natural drying, or 1-2 days when drying with a hairdryer or fan.

When the hair is completely dry, the bundles are touched again with your hands, and then, if no balm was used after washing, a spray is used to soften the strands and a pleasant smell. 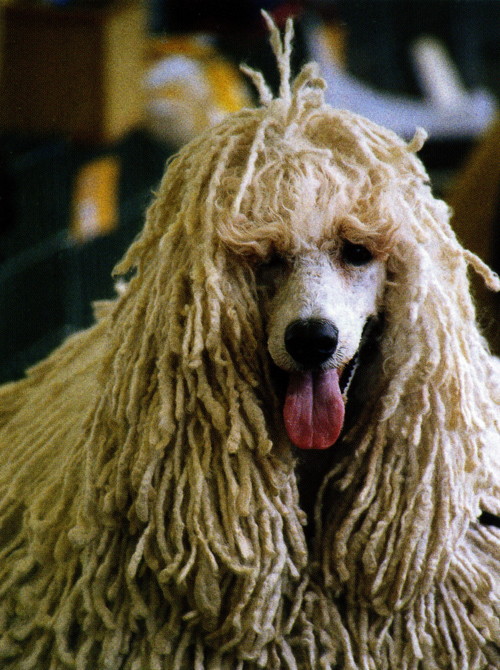 It is believed that the longer the cords, the better. The optimal length of the harnesses should be more than 20 cm, but poodles with cords longer than 40 cm are known. Remember that long and dense twisted strands give an extra load to the dog since their weight can be up to 3 kg.

During walks in rainy weather, the cords are saturated with moisture, and if they are not dried, an unpleasant musty smell appears.

After walks, you need to sort out the cords, because leaves, grass, insects can get entangled in them, dirt can stick.

Usually, the cords are cut after the end of the show career or if the owner just wanted to remove them. In this case, after clipping, the wool grows back and easily gives in to another style.