Over a thousand-year history of breeding goldfish, amazing in appearance forms have been obtained that could never exist in natural conditions, but decorate the aquariums of many amateurs. You will learn about the conditions of keeping the “goggle-eyed” rock – the telescope, which is also called the “dragon’s eye” – from our article.

The telescope (in Asian countries is called “Demakin”) is a short-bodied selective form of a goldfish, a distinctive feature of which is the huge bulging eyes on the sides of the head. They can differ in shape: some are rounded, and some look like a cone, which makes them look like binoculars or a telescope. But despite the size of the eyes, they see quite poorly, besides, the fish often damage them, so it is necessary to carefully approach the selection of neighbors and decorations in the aquarium.

Bulging eyes are a stable trait that is inherited and often persists even when crossed with other breeds. 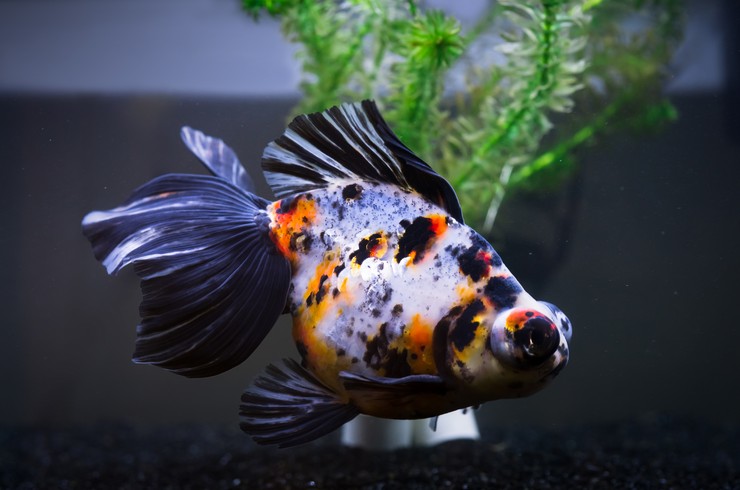 It should be noted that juveniles do not have characteristic bulging eyes; they begin to appear only by six months from the moment of birth. In some telescopes, the stems can be up to 2 cm long.

Like other goldfish, telescopes prefer cool water and can live in decorative garden ponds during the warmer months.

The body is short, ovoid, swollen. Outwardly they resemble a veil tail, the only difference is in the unusually developed eyes. The tail is bifurcated, in the form of a “butterfly” or “skirt”. Fins can be regular or veiled. The dorsal fin may be equal in height to the body.

The eyes are large, varied in size, shape, and direction of the axes. Most often there are spherical and conical, less often – in the form of cylinders. The eyes are directed to the sides or slightly forward.

Telescopes are classified into scaly and non-scaly. The latter does not have a pronounced metallic luster; the fins are usually white.

Many color variations of the telescope were obtained: orange, white, pink, calico, and the most popular black. 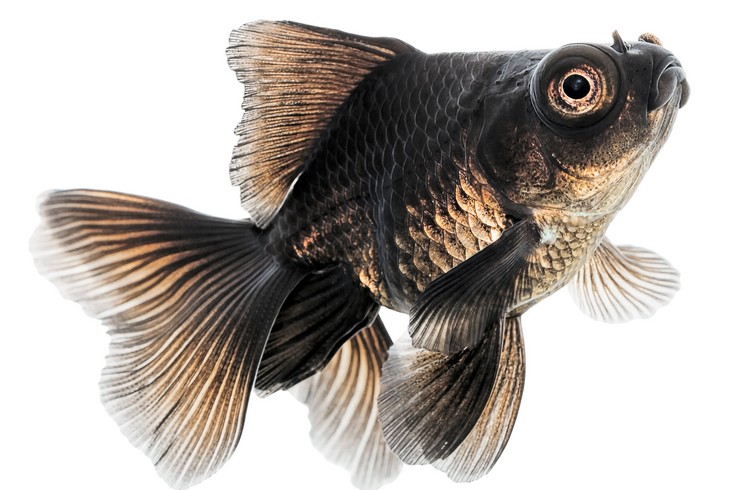 In Japan, telescopes are painted with hieroglyphs with the initials of the fish owner. This is done with a brush dipped in a weak chlorine solution. Not the most humane way, but the embossed lettering looks very impressive.

Telescopes are not found in the wild. This form was obtained through the painstaking work of breeders.

It is believed that the first fish was obtained in China in the 18th century. A little later, it was brought to Japan, and it was the Land of the Rising Sun that became the cradle of a huge variety of telescope shapes and colors. 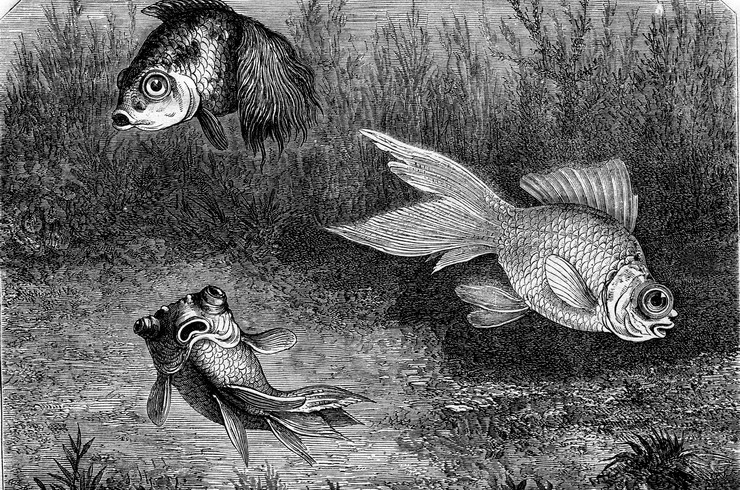 In 1872, several specimens of the telescope were brought to Europe, in the collection of the famous aquarist Pierre Carbonear. He did a lot to spread these fish throughout European countries. In the same year, he presented two females from the collection to the Russian aquarist Meshchersky.

Thanks to their unusual appearance and unpretentiousness in keeping the fish, they quickly got hold of an army of fans.

It should be noted that by the beginning of the 20th century, unique selection telescopes were obtained in Russia. For example, the Moscow black telescope was highly regarded throughout the world. In 1941, a Moscow amateur, Andrianov, developed a kind of black telescope with ruby-red eyes.

The telescope belongs to unpretentious fish, but its content is specific.

Given the large size of the fish and their ability to quickly contaminate the aquarium, the minimum volume should be 60-80 liters per pair of fish. Popular round aquariums are not suitable for keeping such fish at all. It is best to use coarse soil, as fish like to dig at the bottom and can accidentally swallow small pebbles. When choosing decorations, it is necessary to ensure that they do not have sharp edges on which the fish can damage their delicate eyes. Usually, artificial plants, driftwood, large stones are used. It is advisable to leave more room for swimming. The lighting can be bright.

It is necessary to pay close attention to quality filtration and aeration. In this case, it is advisable not to create a strong current, because telescopes are unimportant swimmers. A weekly change of 1/3 of the water in the aquarium is required. 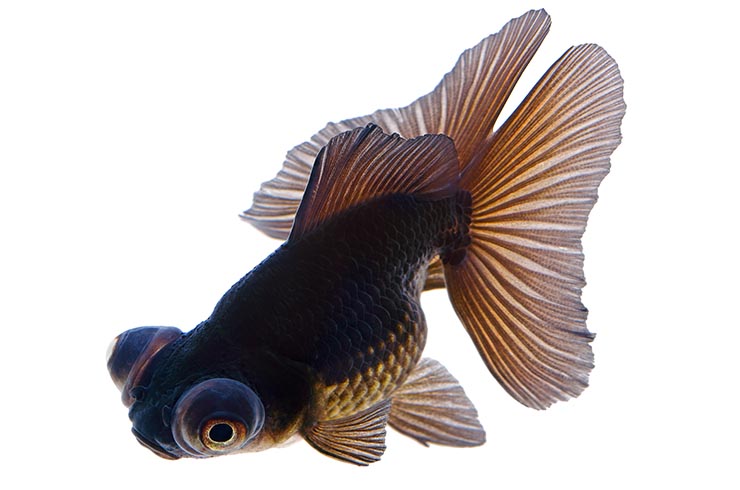 They are able to live in decorative ponds. Water parameters do not play a special role, but you can focus on the following values: pH = 6.5-8.0, GH up to 20.

Living plants are not very compatible with telescopes; they like to pick off delicate leaves and dig in roots. If you wish, you can plant anubias, cryptocorynes, nymphs, only you need to protect the root system from the “digging” of fish.

Telescopes are best kept in a species aquarium or with other types of goldfish. Moreover, it is best to give preference to short-bodied breeds (veil-tails, oranda, stargazers, water eyes.). The fact is that telescopes have very poor eyesight, which does not allow them to quickly find food. When kept with active relatives, they will lose in the competitive struggle and remain hungry. 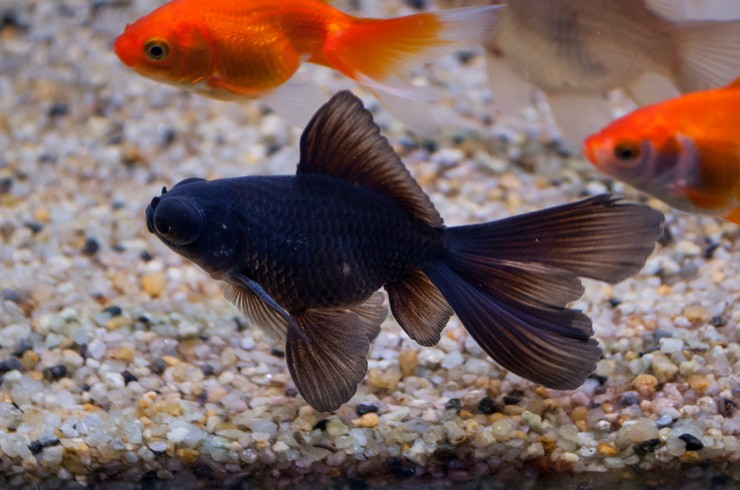 Most tropical fish are incompatible with telescopes due to the difference in comfort temperature. It is undesirable to plant them with barbs, cichlids, irises, as well as harassing (thorns, neons, etc.) – all these fish will not mind biting the long fins of telescopes or damaging their eyes.

Telescopes are unpretentious in food. They perfectly eat any kind of feed of a suitable size. Good quality dry food for goldfish is the best choice for your main food. For example, Tetra Goldfish Gold Japan has been specially formulated for breeding goldfish from Japan. The food in the form of mini sticks gradually sinks to the bottom. This is where the fish usually prefer to look for food. It is rich in plant components that are very important for the digestion of goldfish.

The basic food for all Tetra Goldfish is also well suited. It comes in several forms (flakes, chips, granules, sticks), among which it is easy to choose the one that pets like the most.

And for “dessert” you can offer the fish Tetra FreshDelica Daphnia – Daphnia in nutritious jelly. Your telescopes will definitely love it.

The use of high-quality ingredients in the production of Tetra feed ensures maximum digestibility and a reduction in fish waste, which allows the water to remain clean for a long time.

Telescopes need to be fed several times a day, with a portion of food that will be completely eaten in 2-3 minutes. It is recommended to arrange a fasting day once a week.