Tufted Puffins (Lunda cirrhata) nest on the shores of the North Pacific Ocean. There are separate populations of them both in the seas of the Far East and in the Arctic Ocean. They spend most of the year wandering in the open ocean spaces, and in the spring for 4 months they return to their native nesting sites. 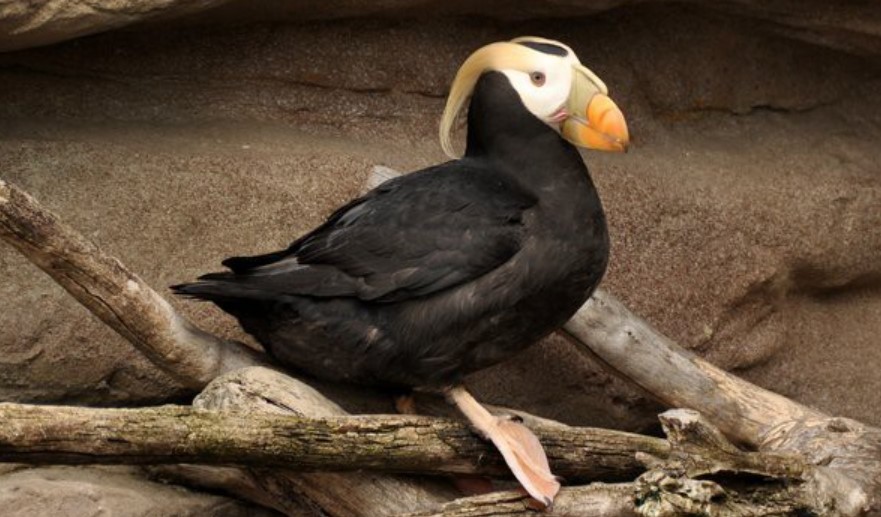 The maps of Kamchatka and Sakhalin are dotted with many islets of various sizes, named after these bright birds. In the Commander archipelago, there is Tufted Puffin Island, on which the largest settlements of 100 thousand pairs on 12 sq. km are recorded.

In May, Tufted Puffins begin to build nests. To do this, they dig holes in soft ground with their strong beak and scoop out construction waste with their wide paws. It is in this hole that the only egg will be laid, from which a chick with a thin long down will hatch.

Small fish and sea crustaceans form the basis of the diet of the Tufted Puffin. But it is not always possible to deliver the catch to the nest; robbers-seagulls lie in wait on the way.

Fish have to be caught far out at sea, which is certainly not a problem for excellent flyers and swimmers. But still, carrying one fish at a time is not effective, because each bird is gaining a full beak of prey. A record catch of 29 fish was recorded.

Heavy storms whip up real foamy mountains filled with green algae on the surf. It becomes a gourmet bird snack.