He’s not much of a lap cat, but the Van will be happy to cuddle next to you and sleep in your bed. 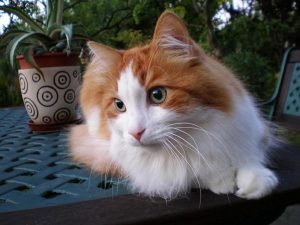 Known as the swimming cat for his propensity to play in bodies of water—or at least to enjoy splashing his paws in it—the Turkish Van is an ancient breed thought to have originated in the Lake Van area of Turkey. The mountainous and rugged landscape and cold climate of the region no doubt contributed to the development of Van’s cashmere-like coat and solidly built body.

The Turkish Van is a natural breed and has probably existed in his homeland for centuries. Legend has it that he swam ashore from Noah’s ark, which tradition says landed on Mount Ararat in Turkey, not far from Lake Van.

How did the Van come by his spots of color? Both Jewish and Islamic traditions say that the cats were the recipients of a divine touch that imparted color to their formerly white coat. On the ark, a door slammed on the cat’s tail, turning it red, and God reached out and touched the cat on the head, leaving a spot where his hand rested. In the Islamic version, Allah touched the cat on the back, and the spot that is sometimes seen on a Turkish Van’s back is known as the thumbprint of Allah.

However he came to be, the Van has been attractive to many of Turkey’s invaders and visitors over the years. At least a few probably made their way to Europe as “souvenirs” in the past millennium.

It wasn’t until the 1970s, though, that a Turkish Van was first brought to the United States. The International Cat Association recognized the breed in 1985, and the Cat Fanciers Association began registering it in 1988. In Turkey, the cats are considered national treasures, and their preservation is overseen by the Turkish College of Agriculture and the Ankara Zoo. 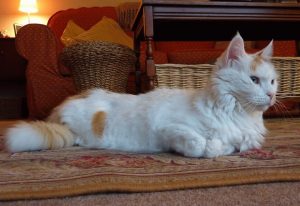 When he is properly socialized in kittenhood, this is a social and affectionate cat who is strongly attached to members of his family, although he may choose one or two as his favorites. He is highly active and athletic, remaining playful into his senior years. Athletic doesn’t mean graceful, however. The Van is big and ungainly; this is one cat who doesn’t always land on his feet.

Turkish Vans are highly intelligent and can learn tricks and games, including playing fetch. They like teaser toys that allow them to mimic pouncing on prey. And if you can’t find your Van, look up; he is probably perched overhead, as high as he can get. Don’t put anything on display that is easily broken; the Van has a wicked sense of humor and may enjoy pushing items off a shelf just to see what happens. Or sometimes he’s just clumsy.

The Van may or may not be a good traveler. Trips to the veterinarian often involve the cat vomiting, peeing, or pooping in the car. If you like to RV or take road trips with your cat, ask the breeder if cats in her line are prone to carsickness.

The Van’s love of water can lead him into trouble. Put down toilet seats and cover swimming pools and spas if you aren’t there to supervise his aquatic excursions. And resign yourself to finding your faucets dripping. He can easily learn to turn them on so he can drink from them or play in the sink. It’s not unusual for a Van to simply enjoy lying in the water, especially during hot weather.

A Van dislikes being held or restrained, and it is a rule at cat shows that the cats are displayed on the table instead of being held up in the air. Most notably, if you are ever unsure of how a Van is feeling, pay attention to his Vanometer. That pretty shell-pink nose will start to turn red if your Turkish Van is upset. If his nose shading from pink to crimson, heed the warning and leave him alone.

He’s not much of a lap cat, but the Van will be happy to cuddle next to you and sleep in your bed. He will also give firm direction as to the proper way to pet him. 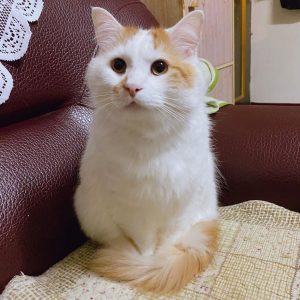 Both pedigreed cats and mixed-breed cats have varying incidences of health problems that may be genetic in nature. Turkish Vans are generally healthy, although some have been reported to develop a form of heart disease called hypertrophic cardiomyopathy. In some breeds such as the Maine Coon, HCM is inherited, but that has not been proven in the Turkish Van.

The Turkish Van has a single coat with a silky texture. Because there’s no undercoat to cause mats or tangles, it’s easy to groom with weekly combing or brushing with a slicker brush. It sheds very little except during spring and fall when the old coat is falling out or a new coat is coming in. Older cats may have difficulty grooming themselves thoroughly, so it can be a good idea to brush or comb them more often. The Turkish Van‘s coat is water-resistant, so be glad that baths are rarely necessary.

Brush the teeth to prevent periodontal disease. Daily dental hygiene is best, but weekly brushing is better than nothing. Trim the nails every couple of weeks. Wipe the corners of the eyes with a soft, damp cloth to remove any discharge. Use a separate area of the cloth for each eye so you don’t run the risk of spreading any infection.

Check the ears weekly. If they look dirty, wipe them out with a cotton ball or soft damp cloth moistened with a 50-50 mixture of cider vinegar and warm water. Avoid using cotton swabs, which can damage the interior of the ear.

It’s a good idea to keep a Turkish Van as an indoor-only cat to protect him from diseases spread by other cats, attacks by dogs or coyotes, and the other dangers that face cats who go outdoors, such as being hit by a car. Turkish Vans who go outdoors also run the risk of being stolen by someone who would like to have such a beautiful cat without paying for it. 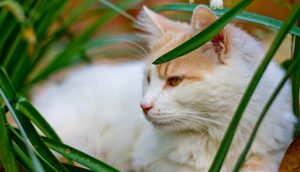 You might think that the Turkish Van is a white cat with patches of color, but genetically you would be wrong. He is, in fact, a colored cat with very large patches of white, a pattern caused by the piebald white spotting gene. The result is a cat whose body is mostly white, with colored markings on the head and tail. He may also have random spots of color on the body and legs. This type of coloring is sometimes seen in other breeds and is known as the Van pattern.

Colors seen in the breed include red, cream, black, blue, tabby in red, cream, brown and blue, and various shades of tortoiseshell. Nose leather is pink, as are paw pads, although they can sometimes have color spots.

The Turkish Van has a broad, wedge-shaped head with a rounded muzzle, moderately large ears with slightly rounded tips, and moderately large rounded eyes that can be blue amber or one of each color. As befits a cat who was formed to survive in a rugged landscape and climate, he has a strong, powerful body with a broad chest and shoulders and long, muscular legs. Males are much larger and more muscular than females.

Keeping the Turkish Van cozy is a soft, semi-long single coat with feathering (longer hair) on the ears, legs, feet, and belly, a ruff around the neck, and a fully plumed tail. Kittens and young adults have a less developed coat than mature adults. The coat doesn’t achieve its full length until the cat is at least two years old. In summer the coat is short, but it becomes substantially longer and thicker in winter.

This is a large breed; it can take three to five years to reach its full size. 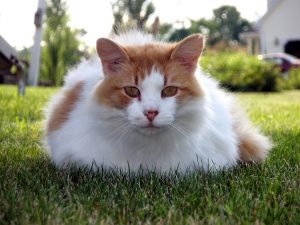 The Van who has been well socialized is comfortable with kids, making him a good choice for families with active children who will enjoy running around with a teaser toy, throwing a ball for the cat to fetch, or teaching tricks. Supervise young children to make sure they pet the cat nicely and don’t pull his fur or tail.

The Turkish Van is happy to live with cat-friendly dogs, too, as long as they recognize that he’s in charge. When it comes to cats, he prefers the company of his own kind, but he will accept other cats, especially if he is brought up with them from kittenhood. In any case, introduce pets slowly and in controlled circumstances to ensure that they learn to get along together.