The Tonkinese is the love child of the Siamese and Burmese breeds. The two breeds from Southeast Asia were crossed in an attempt to create a cat with a moderate body type, a less piercing voice than the Siamese but with loving nature and intelligence shared by both the Siamese and Burmese. But the story of their affair began with a case of mistaken identity. 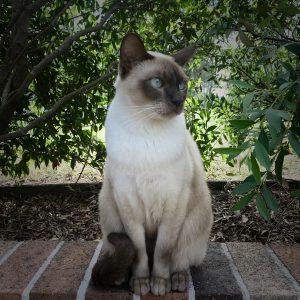 Wong Mau, a small, dark-brown cat, belonged to Dr. Joseph Thompson. A sailor, knowing of Dr. Thompson’s interest in felines, had brought him the cat, acquired in a far-away port. Wong Mau was at first thought to be a Siamese with a chocolate-colored coat. Such Siamese wasn’t unheard of. “Chocolate Siamese” was described in the 1880s. Their bodies were tan or brown, and they had seal-brown or nearly black points. The seal-point Siamese, also known as royal Siamese, had lighter bodies that contrasted with their dark points and were preferred by breeders and the public. The chocolate-colored cats eventually disappeared in Britain, but they still existed in Thailand and Burma (now known as Myanmar), where they were probably the offspring of natural (as opposed to human-directed) matings between free-roaming Siamese and Burmese cats. Wong Mau was one of them. It was her destiny to become the matriarch of two new breeds: the Burmese and, later, the Tonkinese.

The first deliberate crosses between Siamese and Burmese began in the 1950s with Milan Greer, who called the cats “golden Siamese.” He didn’t continue his breeding program, but other breeders became interested in producing a dark-brown cat with points and crossed Siamese with Burmese to do so. The Canadian Cat Association began registering the “Tonkinese” in 1967 and other cat associations eventually followed suit, although some, such as the Cat Fanciers Association, did not grant recognition until almost 20 years later, in 1984.

The name under its original spelling of Tonkanese was said to reference the musical South Pacific, which featured an island where no one discriminated against “half-breeds.” There was often confusion about the spelling, however, so in 1971 the name was officially changed to Tonkinese—after the exotic-sounding Bay of Tonkin in Vietnam—even though the cats had no association with that country. 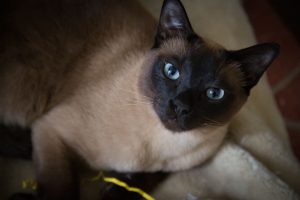 The Tonk feels surprisingly heavy when picked up and can weigh six to 12 pounds or more.

The Tonk, as he’s nicknamed, is friendly, active, and loving. If you think of cats as being aloof and independent, it’s only because you haven’t yet met a Tonkinese. He demands attention and affection and won’t rest until he gets it. This is a cat who will follow you around, ride on your shoulder, and be involved in all family activities. He likes meeting people and is not the type of cat who will be satisfied to stay home alone all the time. If you work during the day, it’s a good idea to make sure he has a friend to keep him occupied, whether it’s another Tonkinese or another cat, or even a dog.

Like his forebear the Siamese, the Tonk is brainy and active. He likes to jump up to high places, retrieves as if he were born to it, masters puzzle toys instantly, and will learn to walk on a leash if you so desire. Teach him tricks and provide him with a rotating assortment of interactive toys to keep his mind and body exercised. Tonkinese can be stubborn in their quest to get their own way, but their clownish behavior is so endearing that it doesn’t really matter.

A Tonk is talkative, although his voice is not as loud and raspy as that of a Siamese. The Tonk also has a softer side. He loves sitting in a lap and will claim yours just as soon as you sit down. 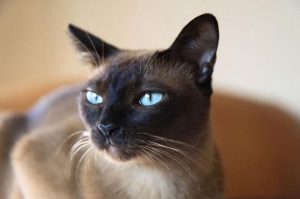 Both pedigreed cats and mixed-breed cats have varying incidences of health problems that may be genetic in nature. Tonkinese is generally healthy, although they can be prone to gingivitis and may be sensitive to anesthesia. Because they descend from the Siamese, albeit relatively far upon their family tree, they may also develop some of the same diseases that affect the Siamese, including the following: 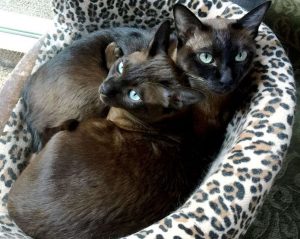 The soft, short coat of the Tonkinese is easily cared for with weekly brushing to remove dead hair and distribute skin oil. A bath is rarely necessary.

Brush the teeth to prevent periodontal disease. Daily dental hygiene is best, but weekly brushing is better than nothing. Wipe the corners of the eyes with a soft, damp cloth to remove any discharge. Use a separate area of the cloth for each eye so you don’t run the risk of spreading any infection. Check the ears weekly. If they look dirty, wipe them out with a cotton ball or soft damp cloth moistened with a 50-50 mixture of cider vinegar and warm water. Avoid using cotton swabs, which can damage the interior of the ear.

Keep the litter box spotlessly clean. Like all cats, Tonkinese is very particular about bathroom hygiene.

It’s a good idea to keep a Tonkinese as an indoor-only cat to protect him from diseases spread by other cats, attacks by dogs or coyotes, and the other dangers that face cats who go outdoors, such as being hit by a car. Tonkinese who go outdoors also run the risk of being stolen by someone who would like to have such a beautiful cat without paying for it. 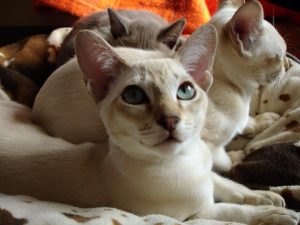 The Tonkinese is a medium-sized cat with a moderate body. Goldilocks would have liked him: he’s not too sleek and he’s not too chunky; for Tonk fans, he’s just right.

A Tonk’s head is a slightly rounded wedge shape, a little longer than it is wide. Medium-size ears are broad at the base with oval tips, and aqua, blue, green, or yellow-green eyes (depending on coat color) are an open almond shape, slanting along the cheekbones toward the outer edge of the ear. The muscular body is supported by slim legs on oval paws. The tail is proportionate in length to the body and tapers toward the end.

The short coat of the Tonkinese comes in a medium thickness and feels soft and silky. It comes in “mink,” solid, and pointed shades in natural, champagne, blue, and platinum, for a total of 12 different colorways. Mink Tonkinese has a body-color that is rich, even and unmarked, shading almost imperceptibly to a slightly lighter shade on the underparts, with a distinct contrast between body color and points. For example, a champagne mink Tonkinese has a buff-cream to the beige body, which may have reddish highlights, medium-brown points, cinnamon-brown nose leather, and cinnamon-pink to cinnamon-brown paw pads.

A natural solid Tonk has a sable-brown body with dark-brown points and nose leather and medium- to dark-brown paw pads. A platinum-pointed Tonkinese has a pearly white body, frosty gray points, lavender-pink or lavender-gray nose leather, and lavender-pink paw pads. At a show, you will most likely see only see mink Tonkinese, but solid and pointed Tonks carry the genes that are necessary for a successful breeding program.

The active and social Tonkinese is a perfect choice for families with children and cat-friendly dogs. He will play fetch as well as any retriever, learns tricks easily, and loves the attention he receives from children who treat him politely and with respect. He lives peacefully with cats and dogs who respect his authority. Always introduce pets slowly and in controlled circumstances to ensure that they learn to get along together.