With a Cymric around the house, you’ve got a “watch cat” who reacts rapidly and will growl threateningly or maybe even go on the attack at the sight or sound of anything out of the ordinary. 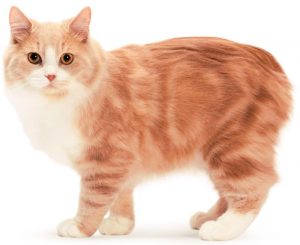 Is it really a cat if it doesn’t have a tail? It is as if it’s a Cymric (pronounced Kim-rick). There are lots of cats with short tails or no tails, but the Cymric (and his sister breed the shorthaired Manx) is the only one specifically bred to be tail-free. Sometimes jokingly said to be the offspring of a cat and a rabbit (however cute the idea, a “cabbit” is biologically impossible), these particular tailless cats are the result of a natural genetic mutation that was then intensified by their remote location on the Isle of Man, off the coast of Britain.

The cats are thought to date to 1750 or later, but whether a tailless cat was born there or arrived on a ship and then spread its genes throughout the island cat population is unknown. The island became known for tailless cats, and that is how the breed got its name of Manx. The Manx has long been recognized by the Cat Fanciers Association, The International Cat Association, and other cat registries. A longhaired version was accepted by CFA as a division of the Manx in 1994. In some associations, the longhaired Manx is called a Cymric and is considered a separate breed.

This is a medium-size cat who weighs 8 to 12 pounds and feels surprisingly heavy when lifted. 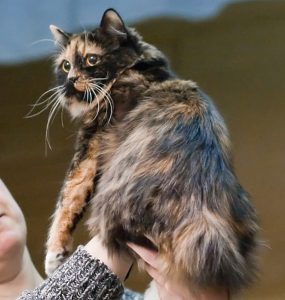 These cats originated as mousers, and whether shorthaired or longhaired they retain their fine hunting skills and alert nature. With a Cymric around the house, you don’t need a watchdog; you’ve got a “watch cat” who reacts rapidly and will growl threateningly or maybe even go on the attack at the sight or sound of anything out of the ordinary. If he sees that you aren’t alarmed, he’ll settle back down.

When he’s not protecting his family and property from mice, stray dogs, or other threats, however, the Cymric is a mellow fellow: an even-tempered and affectionate cat who enjoys serene surroundings. That’s not to say he is inactive. This is a happy, playful cat who likes to follow his favorite person through the house and assist with whatever he or she is doing. When you are ready to relax, though, the Cymric will be in your lap, ready for a comfy nap. If no lap is available, he’ll curl up on the nearest available spot that allows him to keep an eye on you. He “speaks” in a quiet trill and will carry on a conversation if you talk to him.

The Cymric has an adaptable nature if he is exposed to activity and plenty of people as a young kitten. He will enjoy meeting new people, greeting them with a gentle head butt or cheek rub, and can adapt to a new home or family if such an upheaval in his life is necessary.

This is a smart cat who can learn tricks, including fetch and come, and is willing to walk on a leash if taught early. He often likes to ride in the car, making him a great companion on long-distance trips. He is also good at learning how to open doors, so be sure anything you don’t want him to have is under lock and key. Unlike most cats, the Cymric is willing to accept boundaries and will usually respect your wishes if you tell him no when he jumps on the counter or scratches on your sofa. Just be sure you give him an acceptable alternative as thanks for his nice behavior.

The Cymric is highly people-oriented. Choose him only if you can give him plenty of time and attention daily. 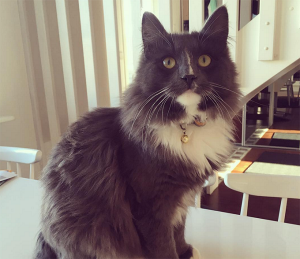 Both pedigreed cats and mixed-breed cats have varying incidences of health problems that may be genetic in nature. Cymric are generally healthy, but the following diseases have been seen in the breed:

The Cymric’s coat is easily cared for with brushing or combing a couple of times a week to remove dead hair and distribute skin oil. Check the rear end closely to make sure feces aren’t clinging to the fur surrounding the anus, and clean it if necessary to prevent the cat from smearing poop on carpets or furniture.

Brush the teeth to prevent periodontal disease. Daily dental hygiene is best, but weekly brushing is better than nothing. Wipe the corners of the eyes with a soft, damp cloth to remove any discharge. Use a separate area of the cloth for each eye so you don’t run the risk of spreading any infection. Check the ears weekly. If they look dirty, wipe them out with a cotton ball or soft damp cloth moistened with a 50-50 mixture of cider vinegar and warm water. Avoid using cotton swabs, which can damage the interior of the ear.

Keep the litter box spotlessly clean. Like all cats, Cymrics are very particular about bathroom hygiene.

It’s a good idea to keep a Cymric as an indoor-only cat to protect him from diseases spread by other cats, attacks by dogs or coyotes, and the other dangers that face cats who go outdoors, such as being hit by a car. Cymrics who go outdoors also run the risk of being stolen by someone who would like to have such a beautiful cat without paying for it. 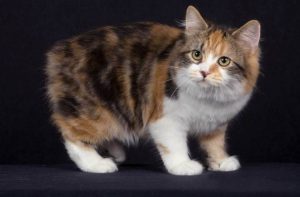 If he is introduced to them in kittenhood, the active and social Cymric is a perfect choice for families with children and cat-friendly dogs. He will play fetch as well as any retriever, learns tricks easily, and loves the attention he receives from children who treat him politely and with respect. He lives peacefully with cats and dogs who respect his authority and can learn to leave birds and fish alone. An adult Cymric may not appreciate children as readily, especially if he is used to a quiet household. Always introduce pets slowly and in controlled circumstances to ensure that they learn to get along together.