The history of Akita Inu dogs goes back to ancient times. The ancestors of the Akita are spitz-like dogs, which were the guards of feudal families in Japan. In addition, tall and large dogs were used to hunt wild deer, wild boars, foxes, and even bears.

A period of the industrial boom in Japan forced hunting dogs to retrain as guards who defended their homes from robbers and murderers. The spreading popularity of dog fights has reduced the number of purebred representatives of the breed, since, wanting to get larger and more angry dogs, Akita owners crossed them with Great Danes, Mastiffs, and Bullmastiffs. The local population, who sounded the alarm, helped to prevent the peculiarities of the Akita from dissolving in new hybrids.

Difference Between American and Japanese Akita 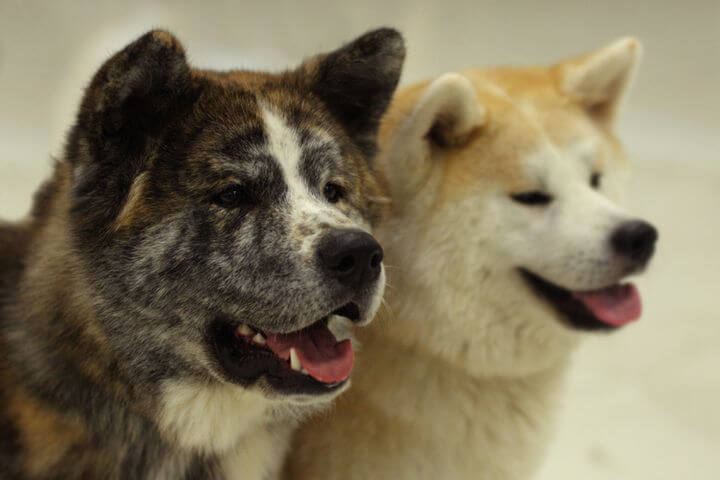 The events of the Second World War influenced the fact that the representatives of the breed almost completely disappeared. With the outbreak of hostilities, brave and hardy dogs were called up to serve along with people and helped soldiers on the battlefield. The dogs pulled out the wounded, delivered medicines, and helped in every possible way in reconnaissance. However, exhaustion, malnutrition, and the fact that the local population, from despair and hunger, had to let all the animals eat meat and skins, almost deprived the world of the Akita Inu dogs.

Important! After the epidemic of rabies began in the country, all animals that were not suitable for service, according to a government decree, had to be exterminated. Akita was rescued by local residents who sheltered the dogs in mountain settlements.

M. Savataishi helped to restore the breed after the end of the occupation. He and his followers strictly followed the puppies’ purity, avoiding mixing and “defect”.

American Akita appeared just “thanks” to the occupation of Japan by US soldiers. The military took a liking to the brave and strong Akitas, and with their help, several puppies were taken to America. Due to the fact that Americans prefer larger dogs, they began to cross the Japanese Akita with other bear-like dogs. As a result of this selection, the world was seen by American Akitas, or as they are also called “big Japanese dogs”.

Today these breeds are considered to be different, which proves a large number of differences. Among them are the following differences:

Outwardly, Japanese ancestors are much smaller than their American counterparts. If an adult “American” can grow up to 71cm at the withers and 65kg, then Akita Inu grow only up to 65cm and 45kg. Different in one-blooded breeds and the structure of the skull. The Americans are distinguished by a large bear-type head, while the Akita’s muzzle, thanks to the long years of hunting for burrowing animals and not only animals, has become more elongated and narrow.

The coat of both representatives is very warm and thick. The representatives of the states have a two-layer coat, while the Japanese boast a three-layer fur coat. The color standard of American dogs allows for many colors and shades. Dogs can be piebald, spotted with a “brindle” color. They may have a blurry or clear black mask on their faces.

The Japanese are distinguished by their pedantry when it comes to coloring Akitas. They can be white: pure, brindle, red. The black mask on the face of the Akita is considered a “defect”. Long-haired dogs are considered to be culling, and Americans quite allow such males and females to a dog show.

Important! The ears and tail of Akita dogs are a feature of the breed. In adults, the ears are standing, and the tail is bent into a donut on the back.

By its nature, the “big Japanese dog” is much more agreeable than its distant relative. They are better socialized and trainable, but just like the Japanese, American dogs can show willfulness during class, refusing to follow commands.

Akita accept only one owner. They are faithful and loyally serving all family members, but they will obey only one leader. Only puppies should be added to cats and other dogs. To have other pets if an adult Japanese or American is already in the house is not worth it.

Both representatives of the species do not speak in vain and endure pain and discomfort steadfastly. You can keep them both in the apartment and in your home. You shouldn’t chain this dog.

Caring for Akitas is quite simple, it is enough to comb the coat several times a week and trim the nails as needed. The key to the good growth and development of the puppy is a balanced diet and frequent physical activity.