There are several reasons why we rarely see baby pigeons, and for this, we will have to briefly consider the peculiarities of the nesting of the urban rock pigeon.

Many urban birds nest openly enough, and without even noticing chicks, we learn about their appearance by observing the behavior of birds near the nests. Buildings of crows and thrushes are clearly visible on tree branches, starlings fly into the nest boxes we hung with food, sparrows hide in cracks on the walls of houses or under roofs, from where bundles of straw and tow they brought are sticking out. Pigeons nest mainly in the attics of multi-storey buildings, flying there through cracks and dormer windows. Therefore, from the street, it is impossible to judge the presence of pigeon nests and their contents. Only occasionally can you see a pigeon returning to a nest under construction with a dry twig in its beak. The dove’s nest, like most of its relatives around the world, is a small platform built from dry twigs, and its construction does not require significant effort. 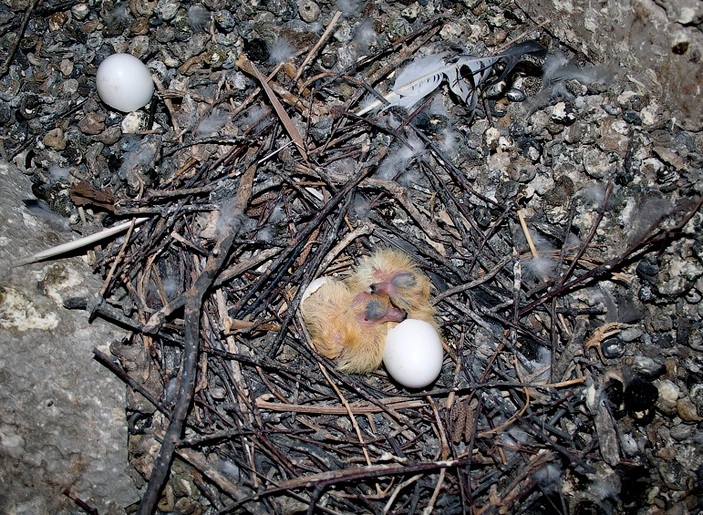 Wild doves inhabit places that are practically inaccessible to people – cornices and niches on high cliffs, sheer cliffs, or on the walls of bottomless caves. Pigeon nests built-in city attics are easier to inspect, but townspeople do not do it often, even if they manage to get under the roof of their house. Where pigeons breed for many years in a row, the entire space occupied by them is flooded with droppings, covered with nesting material, mixed with dead eggs and dried corpses of chicks. In such conditions, in the twilight of the attic, it is not easy to spy out a living nest, even if there are large chicks in it. A casual visitor would rather hasten to leave the attic inhabited by pigeons than wait for the adult birds to return to their offspring. 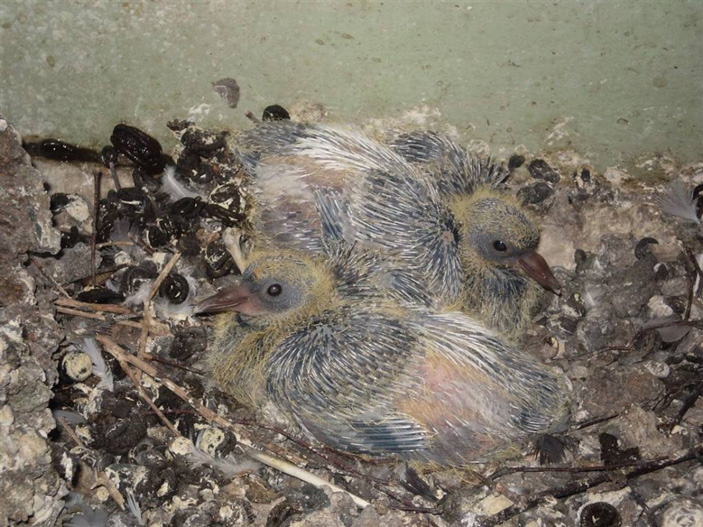 The first two weeks after hatching, the baby pigeons feed mainly on the secretions of the walls of the parents’ goiter (bag-like expansion of the esophagus) – a kind of “bird’s milk” with the consistency of thick sour cream and containing all the organic and mineral substances necessary for the development of the chicks. Later, the baby pigeons gradually switch to grain and other roughage, which the parents also bring them to the crop. By the appearance of a flying pigeon, it is impossible to determine whether it is carrying food to chicks. That is why it is so difficult to notice the beginning of the period when pigeons have offspring.

We Do Not Distinguish Young Pigeons From Adults

How do young birds that have left their nests usually look like? In urban songbirds – crows, thrushes, and sparrows – the so-called chick type of development, that is, their chicks are born completely helpless and sit in the nest almost until they are fully mature, leaving it shortly before getting on the wing. Young birds capable of flying may differ little in size from their parents, however, they immediately give themselves away with short, not yet fully grown, tails, bright (yellow or red) corners of the mouth, as well as characteristic behavior: fledglings (chicks that have just begun to leave the nest) tremble shallowly wings and open their beaks, begging for food from their parents. In brood birds (for example, in the urban mallard), in which the chicks leave the nest soon after hatching, they differ sharply from their parents in their appearance: the chicks are covered with down, not feathers, noticeably smaller than adults, and are colored differently. 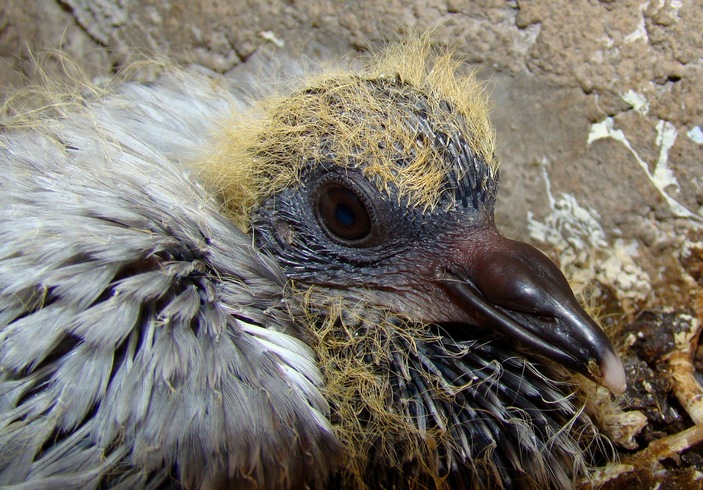 A grown baby pigeon before the fluff finally changes to feathers; soon he will be able to fly. Pay attention to the color of the iris of the eye: it is brown, while in adult birds it is red or orange. Photo from the site en.wikipedia.org

Pigeons also belong to chicks, and all their development takes place in the nest. When, at the age of about a month, young pigeons leave the nests, their feather cover is already almost completely formed and they are very similar to adults (more than songbirds). Young pigeons are able to fly independently and search for food, although inexperience often leads them to death – for example, under the wheels of cars. Until they reach full independence, they find food in the craws of their parents, so the base of their beak remains unfeathered for a long time, otherwise, their feathers could easily get dirty or quickly wear out when adolescent pigeons push their beak into the beak of their mother or father. The beaks of young pigeons, which are bare at the base, seem to us longer than the beaks of adults. 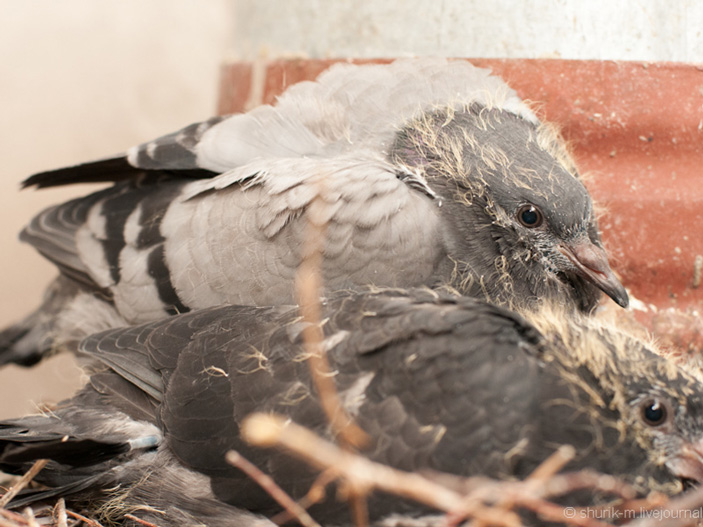 Adult pigeon chicks. The fact that these are young birds is indicated by the remains of yellow fluff in their plumage.

In most birds, the plumage of young birds looks duller and less elegant than the plumage of the parents. This is also true for pigeons: on the neck and chest of young birds, the metallic sheen characteristic of wild pigeons and many of their domesticated offspring is missing. The lack of such brilliance does not make them less noticeable to predators, but, apparently, determines the nature of the relationship of pigeons with relatives, who immediately identify young individuals in dimly colored birds. A person can only notice the differences between young and adult pigeons at close range. 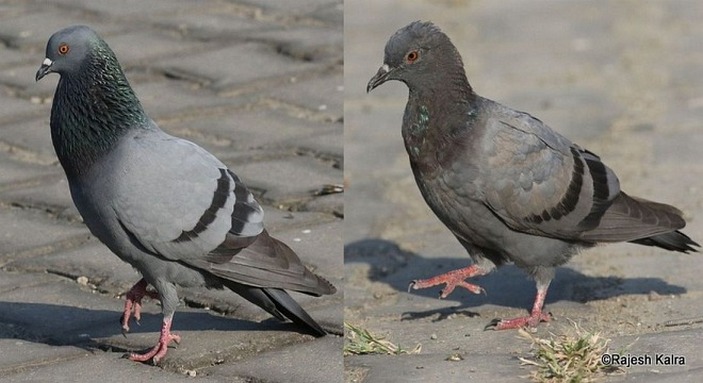 On the left is an adult pigeon, on the right is a young one. Please note that the young bird does not have a metallic sheen in the plumage of the neck and chest, the iris is brown, not orange. Despite these differences, it is not so easy to spot such a pigeon in a flock of adults. Photo from orientalbirdimages.org

Young birds are often betrayed by the attitude of their parents towards them. Their parents are invariably found next to the chicks of hooded crows or field thrush – some of the most prominent urban birds. They bring them food (in their beaks, like blackbirds, or in a special bag under the beak, like crows), cry excitedly when a person or a dog approaches the chicks, and often try to drive away a potential predator. For pigeons, such manifestations of anxiety are not typical. According to the literature, pigeons continue to feed the young after their departure, but they do this for a short time – no more than a week. Chicks of pigeons nesting on roofs, apparently, fly to the ground and completely independent – in any case, I have never been able to observe how a young pigeon begs for food from an adult. In this, doves resemble swifts, whose parents stop feeding the chicks even before they leave the nest.

No matter how similar young pigeons are to adult birds, we would inevitably pay attention to them if they appeared immediately in large numbers, like fledglings of many of our songbirds that fill city squares in May and June.

However, pigeons do not breed as synchronously. Many pigeons begin to build nests in February and March and manage to make four or five nesting attempts per year, but there is no simultaneous departure of young pigeons from neighboring nests. Different pairs start nesting at different times, in many pigeons, the clutches and chicks die (for example, the nest is ruined by the hooded crow), and adult birds begin to re-nest, while in others the chicks successfully fly out. Chicks of late broods leave nests in November-December. There are known cases of successful breeding of the rock dove in other winter months.

Broods of a rock dove are small. The female lays only two eggs. The first chick is born almost a day earlier than the second and gets an advantage in development so that the younger chicks sometimes die of exhaustion. By the time the chicks leave the nest, the female often already incubates the eggs of the next clutch, and then only the male feeds the grown offspring. Only he accompanies the young if care for them continues after departure.

The extended nesting period of urban pigeons, the lack of synchronous reproduction of different pairs, the relatively small number of surviving offspring, the lack of long-term communication of pigeons with their parents contribute to the fact that we rarely notice young pigeons on our streets. However, with enough attention and patience, it is not so difficult to get to know young pigeons.