Anyone who has hit a dog or a cat is initially in shock. An accident like this is bad enough. However, it gets worse when the driver doesn’t know what to do next. What should be done if the worst comes to the worst – and what about the legal issues?

Contents hide
1 What Should You Do if You Hit an Animal on the Road?
2 Run Over an Animal: What to Do?
2.1 Keep Calm
2.2 To secure the scene of an accident
3 First Steps After the Accident
3.1 Preparation and inventory
3.2 Call the vet or veterinary clinic
4 Veterinary Costs: Who Pays the Bill?
4.1 The driver is not responsible!
4.2 Who pays for the costs?
5 Traffic Law: Who is Liable if a Dog is Hit?
5.1 Hit and run and fine
6 Reporting Requirement
7 Do Not Just Drive On, Even With Wild Animals!

What Should You Do if You Hit an Animal on the Road?

Run Over an Animal: What to Do? 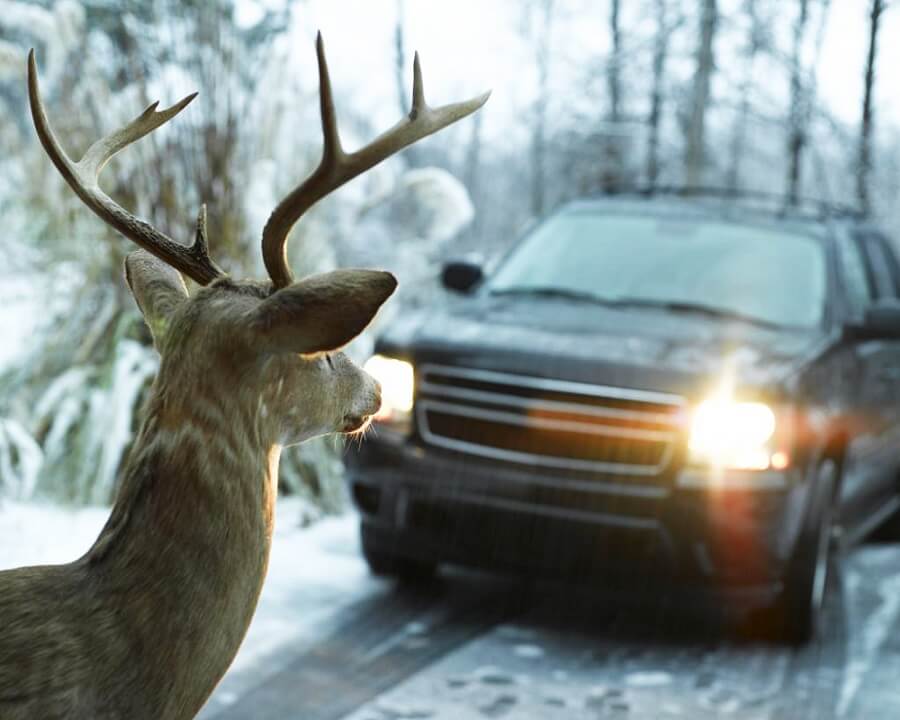 One thing is certain: once the animal has hit it, driving on is not an option. All too often, accidents with animals lead to a runaway. This is not even necessarily bad will. Many drivers just don’t know what to do and feel helpless.

But especially if the animal is still alive, you shouldn’t just leave it lying around.

The top priority in such a case is: keep calm. Panic only leads to the fact that the mind can no longer think clearly. Take a deep breath and focus on your actions. If you panic, so will the animal. That doesn’t make the situation any more pleasant.

To secure the scene of an accident

Pull the vehicle over to the right so that it does not pose a risk to other road users. Now it is important to secure the scene of the accident. To do this, put on your safety vest and set up a warning triangle, as you would with any traffic accident.

First Steps After the Accident

If the dog or cat is seriously injured after the accident, first aid measures must be taken.

After the accident site has been secured, an inventory of the injured animal follows. Is it still running around? Is it limping? Is it panicking and hiding? Tie up your dog or cat to prevent further accidents. Now clarify how badly the animal is injured – also for the subsequent call to the vet. The following questions will help with the inventory:

Call the vet or veterinary clinic

Dial the number of the closest veterinarian. Describe the incident and the degree of injury as precisely as possible. Also, include your approximate arrival time. The veterinarian may be able to help with first aid remotely.

Veterinary Costs: Who Pays the Bill?

Once the animal has arrived at the clinic or the doctor, the greatest shock slowly subsides. Now the question of costs arises. A car accident often results in serious injury to the animal’s body. Operations quickly generate considerable sums of money.

The driver is not responsible!

The person who caused the accident is not legally obliged to bear the costs! So financially there is no reason not to take the injured animal to the doctor. The veterinarian, in turn, is obliged to provide first aid. It is also his responsibility to get the treatment reimbursed.

Who pays for the costs?

If the owner of the animal cannot be determined, veterinarians contact the respective municipality. This is responsible for assuming the costs of first aid. Usually, the animal is then taken into the care of an animal shelter until the owner has been identified.

Tip: properly chipped and registered animals get back to their owner faster.

Traffic Law: Who is Liable if a Dog is Hit?

Once the initial shock has subsided, questions arise about liability: Was the incident notifiable? Is a fine to be expected – if so, how much?

Hit and run and fine

Even if the driver moves away from the scene of the accident, there is no offense to the driver’s escape. Drivers have to stay at the scene of the accident if people or property are damaged. Pets are treated the same as things before the law. Nevertheless: The pet owner is obliged to exercise his responsibility in such a way that the animal is not at risk. So it is a breach of duty by the owner, but not by the driver. The latter does not pay a fine either.

In principle, there is no obligation to report an accident with a pet. The driver is neither obliged to inform the police nor to find the owner.

The situation changes, however, if the accident creates a further hazard for road traffic.

This is the case, for example, when the dead animal or the injured animal lies on a busy road. In this case, the driver must call the police who are responsible for the removal.

Do Not Just Drive On, Even With Wild Animals!

Of course, humans have a completely different relationship to pets than to games. Nevertheless, the reporting requirement also applies to wild animals. The local hunting authority, which can be quickly determined via the Internet, is responsible here. The police will also help in case of doubt.

Even if the animal is injured, the driver does not take the animal to an accident clinic or animal hospital. For legal reasons, he has to stay with the wild animal that has been hit until help arrives. He is not allowed to remove it from the scene of the accident.

Important: Under no circumstances should you approach an injured wild animal! Even if it seems heartless to you, you are protecting yourself. Wild animals react unpredictably when they are injured.