Not so much is known about these rare dogs of noble blood, and they are not as widespread as their aristocratic French ancestors, the Gascon hounds. This breed appeared in North America thanks to a group of hunters – adherents of the old line of hounds, who decided to team up with the goal of breeding these talented dogs with excellent working qualities as companions for hunting. 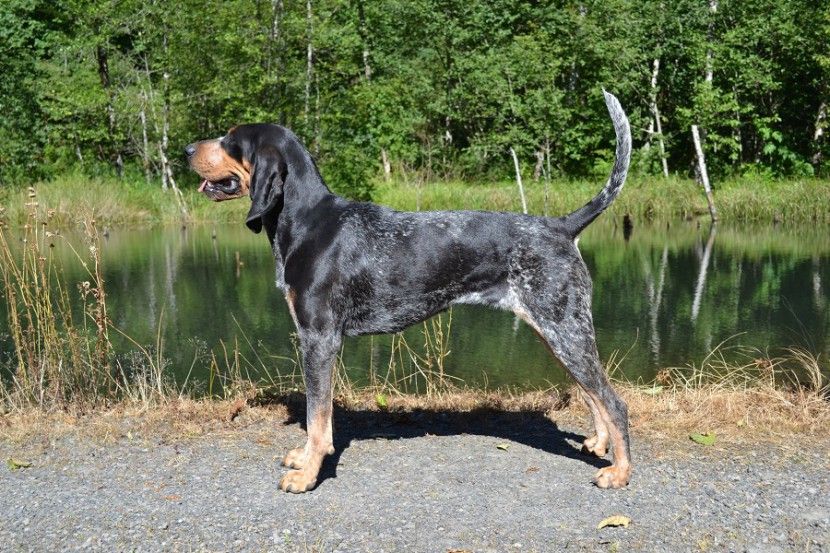 This gambling bloodhound works well in a pack, but alone she does an excellent job of her duties. Also, the American Blue Gascon Hound is distinguished by a quality that is inherent in far from all hunting dogs – it perfectly knows how to track down prey on a cold trail, and rest assured that it will overtake an animal that even managed to run very far. By the way, about the animals – the American blue Gascon hound does not exchange on trifles and hunts mainly for large prey: a fox, a wild boar, a wolf, a bear, and even a cougar, although if a hare meets on its way, she will not neglect it. Usually, hounds, chasing prey, chase it with a loud bark, which sometimes irritates the ears of even the most patient person, but the American blue Gascon hound is an unusual dog and has a special and amazing voice, just as sonorous and melodic. The American Blue Gascon Hound is bigger and taller than its French counterpart, the Gascon Blue Hound. The height at the withers of the big and blue is on average about 80 cm, and the weight is 50 kg. She/he has a flexible strong body, long legs curved to the hips, a narrow head, drooping long ears, and expressive pensively – sad dark brown or black eyes. The coat of these dogs is short and harsh, and their traditional color is a dense black speck, alternating with white speck – and in general, the combination of these colors gives this hound a grayish-bluish tint (which is reflected in its name). This breed is not recognized, and, unlike many of its other “colleagues”, it does not have strict color standards: its appearance is in second place after working qualities. Big and Blue is unusually recklessly behaving on the hunt – this is the meaning of her life, and therefore it is not worth keeping her in an urban setting. In the apartment she will be bored and uninteresting, besides, your neighbors are unlikely to appreciate her sonorous voice. She, of course, will love and respect you, rejoice when you take her out for a walk, faithfully guard your house, but at night your pet will dream of chasing a cunning fox or chasing a flexible and dexterous mountain lion.