Labradors are very upbeat, handsome dogs that make great companions, friends, playmates, and hobbies. This breed is considered an ideal pet. Moreover, they can be easily kept both in your own house and in an apartment or a multi-story building.

According to the internationally accepted classification, Labradors belong to the group of retrievers. However, despite long-established and strictly maintained standards, today there are two large branches – the American and British Labrador Retriever. They differ noticeably not only in appearance but also in characteristic features and habits.

Contents hide
1 The History of the Origin of English & American Labs
2 English vs American Labs Side by Side
3 American Lab vs English Lab: Temperament

The History of the Origin of English & American Labs 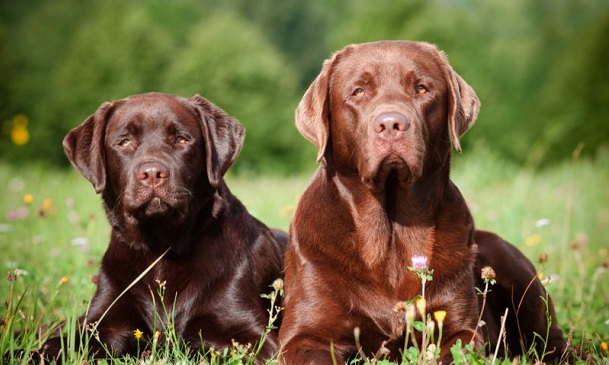 For the first time, Labradors appeared on the island of Newfoundland, which is located in the Canadian province. Subsequently, they crossed the ocean on ships and got to European territory, where they also began to actively develop as breeders.

In 1870, a ban was introduced on the import of American representatives of the breed due to quarantine. This gave impetus to the development of domestic selection in Britain. Hence, two noticeably different dogs appeared, belonging to the same group and equal to a single breed standard.

Important! The English and American types have distinct visual differences as well as characteristic features. However, the similarities in the two dogs are still significantly greater, which allows them to be attributed to the same breed and a single standard.

English vs American Labs Side by Side

Exhibitions with the participation of Labradors are always spectacular events. A variety of representatives of the breed can be represented here, but at the same time, they belong to the same type and fall under a strongly averaged standard.

According to the approved FCI standard, the dog must meet the following requirements:

The jury of any show will evaluate a representative of the breed according to these basic standards. Some dogs differ significantly, so the owners of the pet have to carefully select the events that they plan to attend, as well as study the judges and their preferences in the breed.

The main difference between the American Retriever is its lightness. US breeders tried to get the most lightweight, athletic, working dog that perfectly showed its hunting skills. Therefore, Labradors from the United States are slightly lower and thinner than the proposed standard.

English breeders tried to preserve all the features of the “water dog” as much as possible. Representatives of this type are more massive and stocky. The skeleton is very dense, the dog has a massive skull, short and strong legs.

According to the standard, the retriever has unsurpassed mental characteristics, is maximally oriented towards the owner, and has a good-natured disposition. However, in the matter of personal character, representatives of the breed of various types are very different.

Among the main differences are:

mobility (the American is a working, hunting dog that must be constantly on the move, the British one is imposing and unhurried, an ideal companion for evening exercises);

character (American representatives of the breed are eternal children, they need to run, jump, hooligan, British ones quickly grow up and settle down);

temper (American Labs are a “hurricane” that sweeps away everything in its path, is suitable for people with an active lifestyle, the British retriever is calm and sedate);

ability to train (it is difficult for Americans to sit still and listen to the commands of the owner or trainer, the British lend themselves well to education and listen to every command of their owner).

Important! When choosing a dog for a family with a small child or frequent guests, you need to adhere to a more standard type. British Labradors are obedient, unforgettable, well trained, obedient.

Both types are very attractive and they are undoubtedly representatives of their breed – powerful, agile dogs who are ready to jump and play all day with their owners and their families. However, each person must decide for himself what type of dog character is suitable for him specifically.