The cichlid family is very rich in species that are large in size. Representatives from the South American continent are especially famous for this. To maintain such giants, aquariums with a volume of several hundred liters or more will be required. One of these fish is the Astronotus – a popular cichlid with an interesting tiger coloration and very high intelligence. 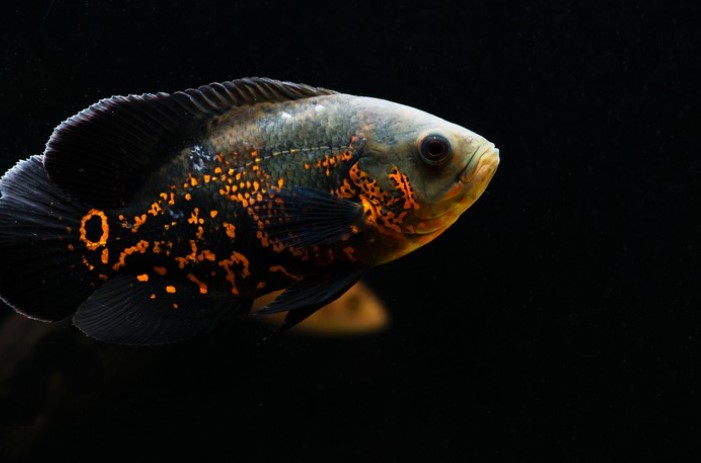 In the aquariums of amateurs, the fish appeared not so long ago. Astronotus got to Europe in 1934, and only 20 years later to our country.

Due to their unpretentiousness, beautiful color, and high intelligence, the fish have become very popular among cichlid lovers. The only thing that limits the keeping of Astronotus is the need for large aquariums and poor compatibility with other fish because Astronotus are predators, ready to eat any fish that can fit in their mouth.

Aquarists containing Astronotus note that the fish recognize the owner and very consciously observe everything that happens in the room. It is also easy to teach a fish to take food from hands, some fish allow themselves to be stroked.

In the United States, Astronotuses are an object of sport fishing, so special farms are being created to grow them.

Astronotus is a very popular fish in Thailand, where it is bred in homes, work, and even temples.

Breeders have obtained many color variations of this species and even a form with a shortened body. 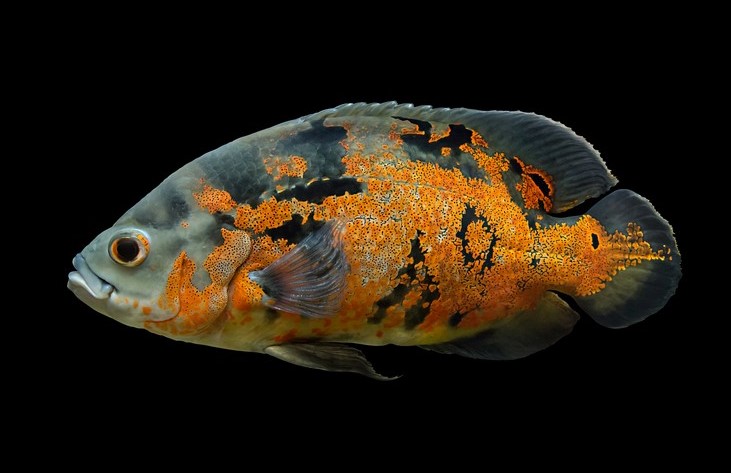 Astronotus is a large cichlid that grows up to 45 cm in nature (and weighs up to 1.5 kg). The size of aquarium individuals depends on the volume in which they are kept, but usually a little more modest – 25-30 cm. The fish has an oval, laterally compressed body. The fins are large, somewhat elongated. The anal and dorsal fins are practically connected to the tail, a kind of “fan” is obtained. The caudal fin is rounded. The head is large, pointed, the forehead line is convex. The mouth is terminal, the lips are fleshy, there are small teeth in the mouth. All these signs give us a typical predator.

The main body color is dark, almost black, with irregularly spaced red-orange spots. Sometimes they are arranged in almost vertical lines, resembling the color of a tiger, for which the fish received one of its names. At the base of the tail is a black spot bordered by an orange stripe.

Interestingly, juvenile Astronotus fish differ significantly in color from adult fish. Their spots are not red-orange, but white. These contrasting colors look very attractive. Sexual dimorphism is not expressed. In our time, several breeding forms have been obtained, differing in color and body shape.

Astronotus are aquarium centenarians. Under suitable conditions, fish can live up to 15 years. 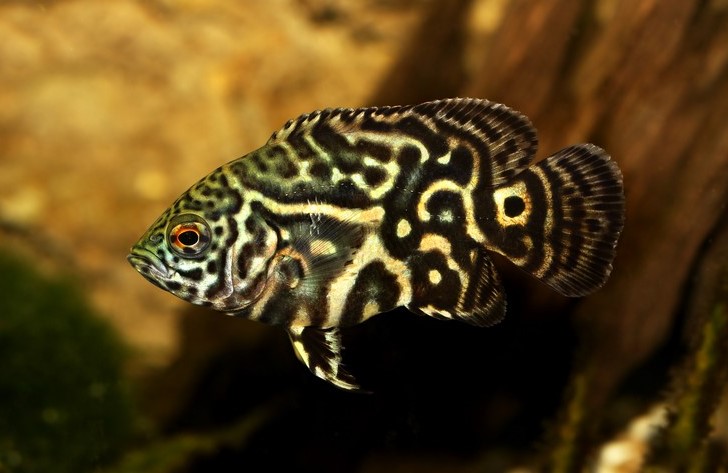 The first description of the Astronotus dates back to 1831. Its historical homeland is the rivers of South America: the Amazon, Parana, Rio Paraguay, Rio Negro. The fish was artificially introduced to many other countries (Australia, China, the southern states of the United States, Singapore), where the fish perfectly acclimatized, but, unfortunately, began to crowd out the local ichthyofauna.

In the countries of South America, it is a commercial fish, the taste of which is highly valued. Astronotus sport fishing is thriving in the United States.

Fish live in a variety of biotopes: large rivers, canals, ponds, lakes. They prefer shallow water and reservoirs with a slight current. Usually, they keep near the coastline, hiding in the flooded tree roots. 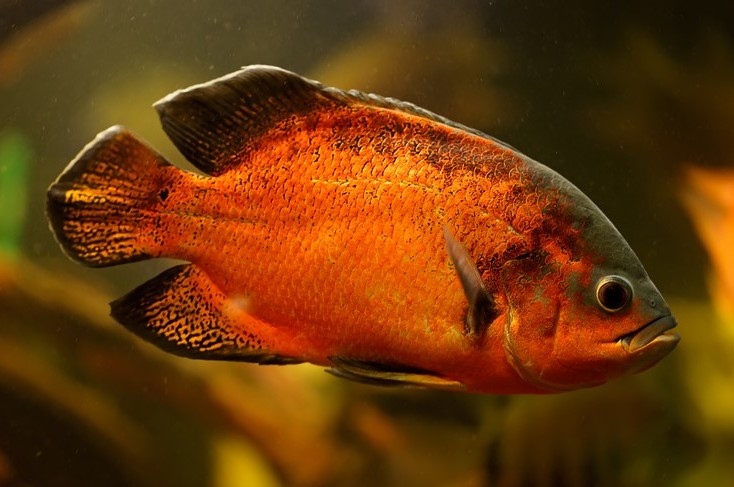 The selective formation of the ocular Astronotus. In contrast to the original shape, the orange-red color is evenly sprayed over most of the body, without forming spots, lines, or curves. The characteristic dark spot at the base of the tail is also absent.

This variety was developed by the Thai fish farmer Charoen Pattabong, who noticed this unusual mutation and reinforced the trait in subsequent generations. 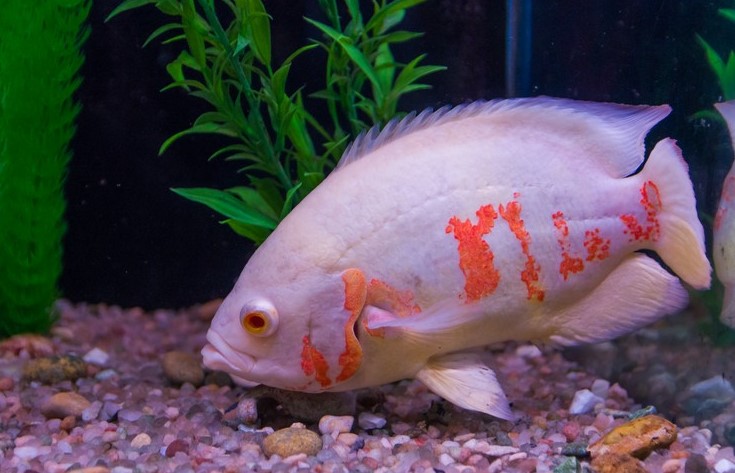 The albino form of the Oscar cichlid has a white body with bright orange or red spots. The eyes are pink or orange. The fins show no traces of dark pigments. The conditions of detention are no different from other forms. 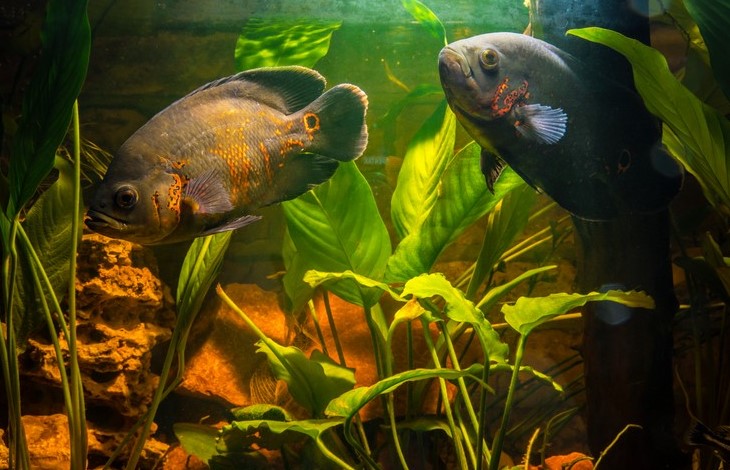 The main difficulty in keeping Astronotus is the need for a large aquarium. It is advisable that at least 100 liters per adult fish. And if you want to keep the Astronotus with someone else, then the 400-liter aquarium may turn out to be small.

Astronotus fry is usually found on sale, no more than 3 cm long. With their color and liveliness, they often attract the eye of buyers and are purchased in general aquariums for small fish. Usually, it ends in failure, Astronotuses grow quickly and begin to eat any fish that can fit in their mouth. Therefore, before buying, be sure to check with the sellers if the fish are compatible with the population of your aquarium.

But if the conditions allow, and you are determined to have an Astronotus, you will get a very beautiful, intelligent, and unpretentious pet.

Much attention must be paid to water quality. The aquarium should be equipped with an efficient filter (ideally an external one) and a powerful compressor for aeration. However, it is not recommended to create a strong current. Once a week, it is necessary to replace 25-30% of the water in the aquarium with fresh water with the obligatory cleaning of the soil so that hazardous waste products do not accumulate.

The natural diet of Astronotus includes small fish, insects, worms, and algae. This species is a carnivore, so it is imperative that fish get plenty of high-quality animal proteins.
Astronotus are prone to overeating, so once a week the fish need a “fasting” day. 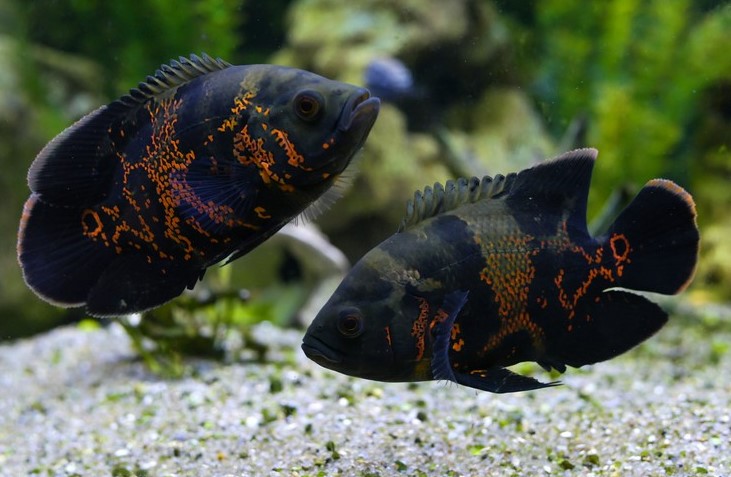 As a rule, Astronotus breeding is not difficult. If a pair of fish lives in a species aquarium, then spawning occurs regularly, the main thing is not to expose the cichlids to severe stress. Sexual dimorphism in fish is not pronounced. It is possible to distinguish between a male and a female-only after the formation of a pair or by the ovipositor of the female during spawning.

During spawning, it is necessary to provide the fish with complete rest. Constant worry can lead to eating caviar or fry. If the fish live in a common aquarium, then for spawning they must be planted in a separate aquarium of 150 liters or more with a large flat stone. If the male is aggressive and chases after the female, they are temporarily separated by glass. Usually, after a few days, the male calms down and is allowed to approach the female.