Bristlenose Pleco( Ancistrus) is a popular aquarium fish from the chain mail family or loricariid catfish. The name of the family comes from the word “Lori-ka”, as the armor of legionaries was called in ancient Rome. 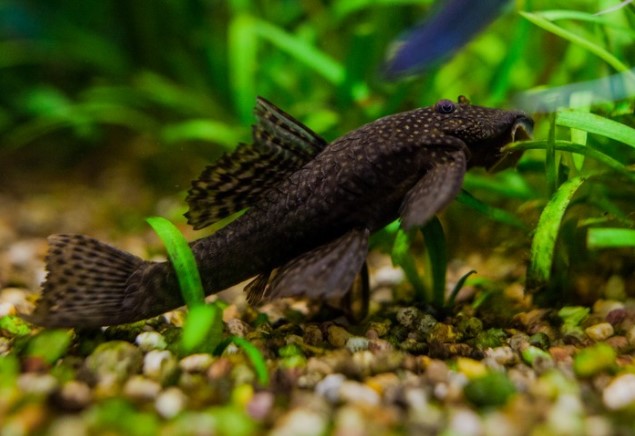 Chain catfish also have their “armor” – the whole body is covered with accrete bone plates that protect these fish from natural enemies. The family contains both small species, several centimeters long, and giants: some can reach up to 35-40 cm in length. Most of the Bristlenose Plecos are peaceful and very hardy fish that will not only become an absolute decoration of the aquarium but will also help the aquarist in the fight against algae – the favorite food of catfish. 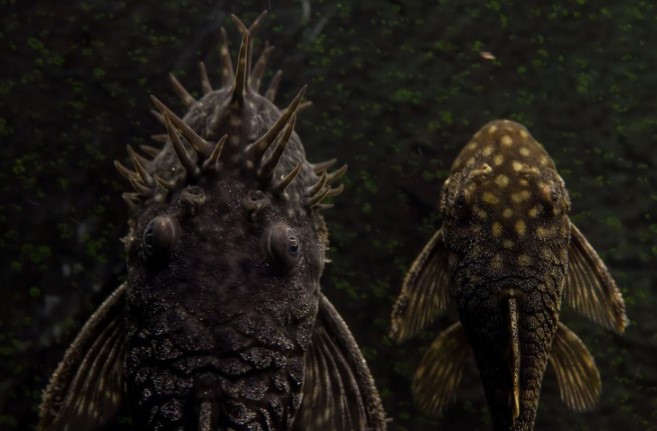 The body of Bristlenose Pleco is drop-flattened, covered with rows of polygonal bone plates. A distinctive feature is the elongated sucker-shaped lips with horn-shaped scrapers that form the lower mouth. They allow Bristlenose Plecos to survive on driftwood and rocks in their natural habitat in strong currents. With the help of horn-shaped tubercles (“graters”), the fish clean off fouling from the glass of the aquarium, plant leaves, decorations, and stones, using them for food.

Body-color can range from light gray to dark gray, brownish, and black with light spots. These spots form streaks on the fins. The abdomen is lighter than the back. Color may fade depending on conditions. Gender dimorphism is common in all Bristlenose Plecos species. However, it is possible to distinguish the male Ancistrus from the female with accuracy only after reaching maturity (at the age of about 1 year, and in some species, only by 2 years). On the head of the catfish, tentacles are located – skin processes. In females, the processes are located at the edges of the head, they are poorly developed (no more than 1 mm) and there are very few of them, in some cases, they are completely absent. The tentacles (“whiskers”) of the male grow over the entire head, reaching a length of 1.5-2 cm, and as the fish grows, they begin to branch.

The maximum size of the Ancistrus catfish in an aquarium is 15 cm. Life expectancy is 6-8 years. 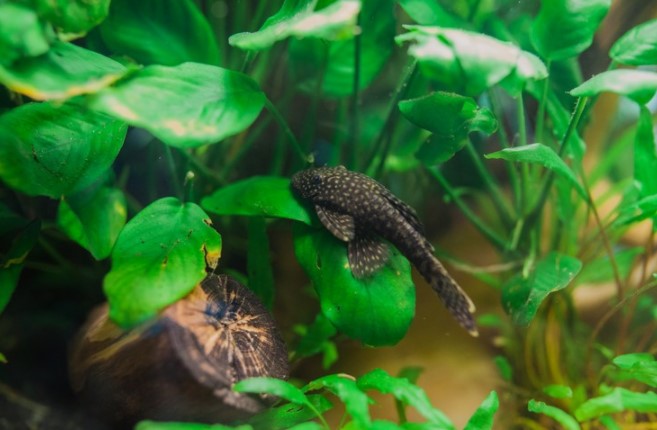 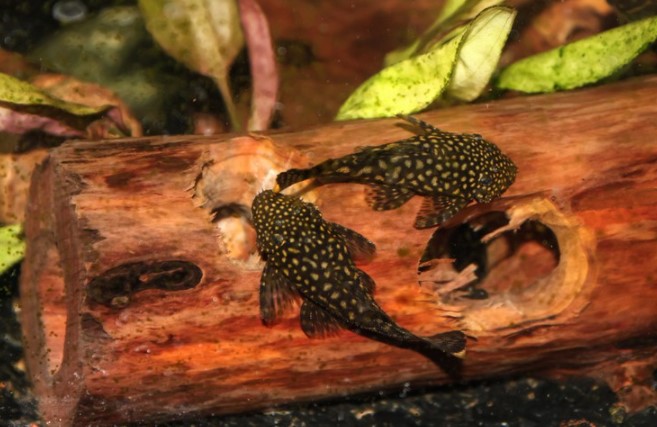 Ancistrus can be kept in almost any tropical aquarium. The recommended minimum volume is 50 liters. It is desirable that the soil does not have sharp edges and is not too shallow. It is very useful to use natural driftwood as decorations: Ancistrus with great pleasure scrape off their top layer and thus get cellulose, which is extremely necessary for comfortable digestion. Fish are active, mainly in the evening and at night, so it is recommended to create periods of twilight lighting every 30-40 minutes between the peaks of bright lighting. It is useful to place a large number of shelters in the aquarium, in which the catfish will hide during the day and as needed.

Despite their origin from South America, where the water in the rivers is predominantly soft and acidic, the Ancistrus have adapted to live in a wide range of parameters. Many ways to get along even with African cichlids in fairly hard and alkaline water. The most important thing is to provide the fish with good aeration and a temperature of 22-24 ° C. 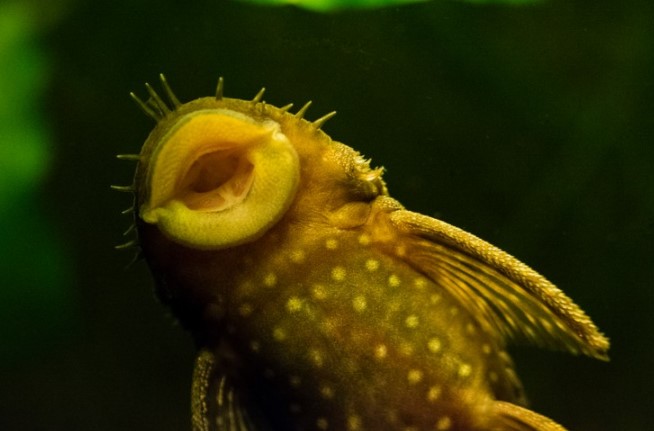 The favorite food for Bristlenose Pleco is algal growth, which very often appears on the walls of the aquarium or decorations when there is an excess of light. These fish are among the most effective aquarium cleaners. In addition, they are happy to eat the remains of food for other fish. In case of a lack of food, Ancistrus can switch to tender parts of living plants, in which they can gnaw a hole or eat it whole. In aquariums with Ancistrus, it is extremely useful to have natural driftwood, nibbling their fish produces cellulose, which is necessary for comfortable digestion.

Often, many aquarists feed their pets with vegetation from their table: scalded lettuce, cabbage, or zucchini. Unfortunately, this way of eating in some cases can lead to contamination of the aquarium, especially if you do not remove food debris. In addition, remember that the food must be nutritious and balanced.

You can feed catfish with tablets once a day before turning off the lights in the aquarium. The number of feeding tablets must be calculated independently, depending on the number and size of Ancistrus. 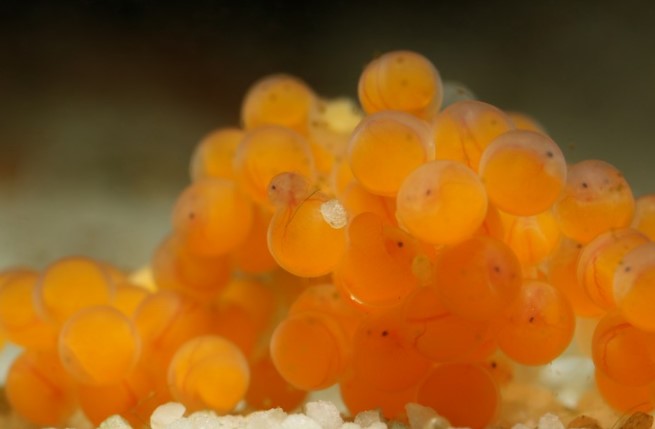 Ancistrus can easily reproduce even in a common aquarium, but fry in this case can be eaten by other inhabitants of it. Usually, the female lays eggs in some kind of shelter – a pipe or behind decorations, sometimes behind a filter or even inside it, if there is an opportunity to get there. Ancistrus eggs are large, bright orange. Ancistrus males take care of the eggs, clean them with their mouths, fan them with fins and protect them from other fish, driving away from the female from the clutch.

In order to preserve Bristlenose Pleco eggs, if spawning has occurred in a common aquarium, they can be moved to a separate container with the male if the eggs are laid in a convenient place, for example, in a tube. However, sometimes the eggs are attached directly to the glass behind stones, in crevices, or behind a filter, in which case you can carefully cut off the clutch with a razor blade and also move it to a suitable container, but without the male, because under severe stress, he does not take care of the offspring and may even eat eggs.

However, in order for the offspring to have a better chance of survival, when breeding, Ancistrus is placed in a separate spawning box with a volume of 50-80 liters, with filtration and aeration. Sometimes one male and several females are chosen as producers, the volume of the aquarium, in this case, should be appropriate – about 150 liters. for 3 individuals. Before spawning, the female of Ancistrus gets fat, which indicates the readiness of the producers to obtain offspring.

Place ceramic or plastic pipes, stones, grottoes, or driftwood of the correct size in the aquarium. Part of the water is taken from the general aquarium, spawning stimulates the addition of 1/3 of fresh water and a slight decrease in the temperature in the spawning box (the temperature should be lowered by about 2 ° C). Usually, the male chooses a place for the nest – a slit or a tube – and thoroughly cleans it, this process can take him several days. At the same time, it is necessary to feed Ancistrus in the spawning aquarium mainly with plant foods; it is also desirable to increase the protein component of the diet.

Ancistrus spawns usually occur at night. The number of eggs laid by a female can range from 30 to 200, depending on her age and size. The female sticks a bunch of orange eggs in a nest prepared by the male, after which the male drives her away and starts protecting the offspring. After that, the female must be planted as soon as possible, since the male is aggressive towards her and can seriously injure her.

The development of eggs lasts 4-7 days, sometimes in order to accelerate the development, the temperature in the spawning box is raised to 26-28 ° C. The male Bristlenose Pleco does not leave the offspring for a minute, even for food, and constantly guards the nest.

The first few days after hatching, the larvae hang in a bunch in the nest almost motionless, after which they leave it, and from that time on the male must be planted. The larvae feed first using the yolk sac. You can feed the grown fry with dry food, tablets for catfish are especially convenient. It is advisable to provide regular meals at least three times a day. In an aquarium with fry, it is recommended to change 20% of the water daily, while small Ancistrus will grow to the size of adult fish in six months, and after about 10 months they become mature and can participate in reproduction themselves.