The Barbet can rightfully be called the “old lady” – after all, this is one of the most ancient French hunting breeds. The ancestors of modern barbets were born back in the XIV century – then they were called brudgy water dogs. “Barbet” in French means “beard”, from which the current name of the breed comes. The history of the origin of this dog with a frivolous name is not completely clear, but most scientists hold the point of view that the ancestors of the barbet are Old English water dogs. Also, the Braque Français, as well as Griffons and Spinone Italiano, are “suspected” of being related to the barbet. 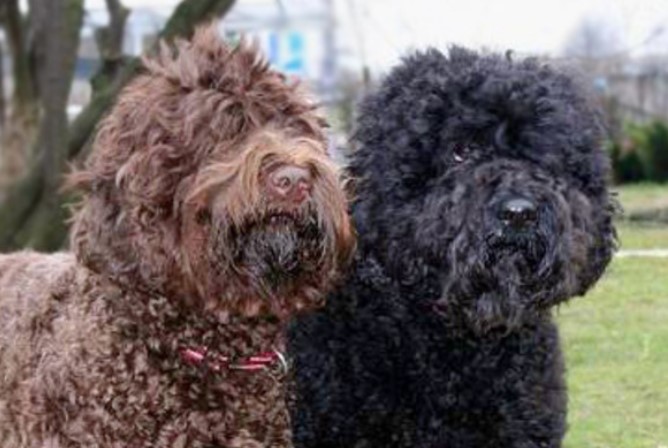 And the barbet itself is the progenitor of such breeds as the Poodle, Bichon Frise, Drachtaar, Otterhound, Irish Water Spaniel, and many others. How the barbet ended up in France is also a mystery. Some researchers believe that he came to Europe with the Moorish conquerors, others insist that Portuguese sailors were his “carriers”. In any case, the barbet became extremely popular and remained so popular until the end of the 19th century. Later, interest in the breed began to fade quickly and the number of barbets began to rapidly decrease. The revival of the breed began only in the mid-1970s, but even today the barbet is still a fairly rare breed. It is mainly distributed in France and Belgium, and outside these countries is practically unknown. Barbet is a determined and passionate hunter. Its main purpose is hunting for waterfowl, but with the proper training, it will perfectly cope with overland hunting. This Frenchwoman is very hardy and resistant to the most severe weather conditions. Thanks to its coat, it can hunt even in icy water. But the barbet, on the contrary, does not tolerate heat as well as cold. When hunting, the barbet works smoothly, unhurriedly, and practically without making a sound. She has an excellent instinct, great patience, perseverance, and just loves to serve the host game. But her talents are not limited to this: the barbet can also successfully cope with grazing and protecting sheep. The barbet is a medium-sized dog with a strong build, many people associate it with a long-unshorn poodle. The barbet has rather large round paws, thanks to which it keeps remarkably on the water, a large head with a long beard, eyebrows, and bangs covering dark expressive eyes, drooping and high-set ears of medium length, covered with long hair. The tail of this French breed is of medium length, set low, saber-shaped, and slightly curved at the tip. The height at the withers at the barbet is 45-56 cm, weight – 16 – 25 kg. The hair of the barbet is long, thick, and wavy (or curly), has a felt-like structure, and has the property of forming bundles and curling into cords and rings. Such an unusual coat protects the dog from dampness and cold, but it rolls easily, therefore it needs constant care: regular brushing and annual grooming. If the barbet participates in exhibitions, then it must be cut like a poodle. If your pet swims in a muddy puddle or ditch during walks, then after the walk, be sure to send him to the shower, otherwise, his fur will then be impossible to comb. The color of barbets is chestnut, gray, fawn, light or dark coffee, black, white, or mixed. The most preferred are chestnut shades or coffee piebald. Some colors can be marked. The barbet is famous for its calm and balanced character and gentle disposition. She is friendly not only to the hosts but also to their guests, if, of course, they are also kind to her. These dogs are very agile and playful, so the barbet will be a wonderful and adored friend for children. Barbet easily learns the skills of obedience, moreover, he loves to learn and strives to fulfill all the master’s commands as best as possible. Barbets are very active dogs, so they need enough space and the obligatory presence of sport in their life in order to always be in good shape. They are wonderful companions for walking, very attached to the owner and trying to be with him all the time and not be far away.